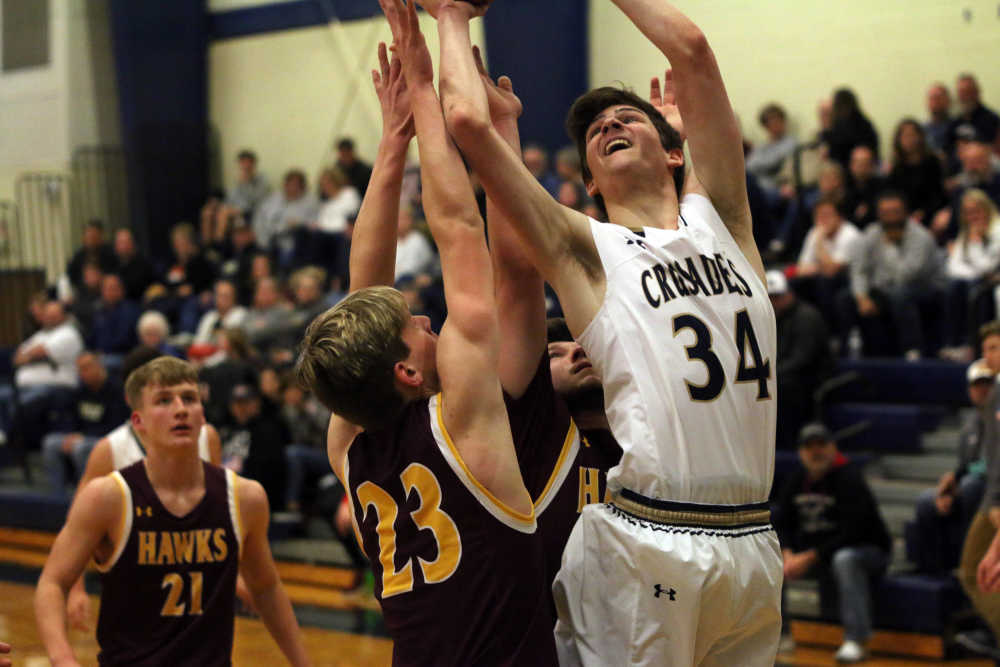 JACKSON, Mo. — Andrew Schwarting made his presence felt against Kelly on Tuesday night.

The 6-6, long-armed senior finished with a game-high 35 points and shot a healthy percentage from the floor, as the Crusaders defeated the Hawks, 74-55, at Saxony Lutheran High School.

Typically a 20-point scorer, Schwarting, had other plans on this particular night.

A perfect 7 of 7 from the floor in the first half, Schwarting scored 11 of his team’s 13 points in the first quarter.

He started by putting the Crusaders on-the-board with a three-pointer from the left corner, and on the very next possession, nailed another perimeter jumper from the right corner.

Fouling him wasn’t a smart decision, either, as the senior hit all five of his free-throw attempts on the night as well.

Saxony Lutheran (8-11) outscored the Hawks 28-19 in the second quarter to push it’s lead to double-figures heading into the break.

Schwarting had nine points in the second period, while senior Jack Foeste had 10. Foeste attempted two three-pointers for the game, both in the second frame, and made both of them as well.

“When you’re down in a defensive stance, but you’re not moving your feet, that’s good offense for them. That’s bad defense for us. We didn’t play well. We didn’t do the things that we’ve been working on.”

Even though Schwarting did the bulk of the scoring, he did have help. Foeste finished with 15 points, while Ethan Koenig added 12, and were the other two Crusaders to reach double-figures.

“We were hitting shots,” said Saxony Lutheran head coach Justin Callahan on his team’s efficient night from the floor. “We did a nice job of executing, and they were playing some zone on us, and we just attacked it. We got up 20, then we started getting a little careless, and they made a little run at us. Second half, we came out and just kept playing.”

Despite not having their strongest night on both ends of the court, Kelly did make the game interesting toward the end of the first half.

Trailing by 13 points, sophomore Gavin Jansen stole the ball and finished at the other end, to end the first half with some momentum.

Jansen finished with four steals. He also had 13 points, on 3 of 11 shooting, and added eight rebounds.

Bryce Morgan led the Hawks with 19 points. He shot 6 of 11 from the floor (5 of 9 from three) and added seven rebounds.