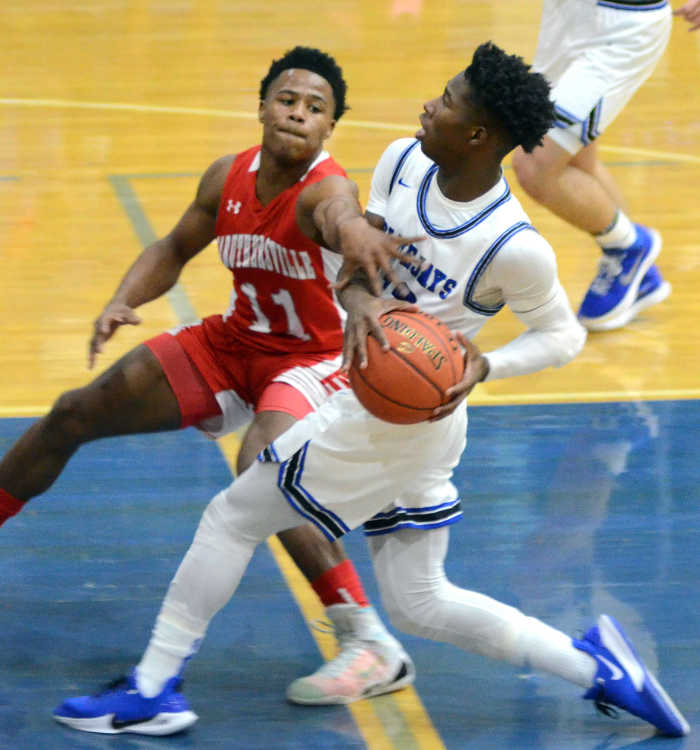 CHARLESTON, Mo – Ever since their loss to rival Sikeston earlier this month, the Charleston Bluejays have been on a roll.

Responding to the setback, the Bluejays have reeled off six-straight wins, claiming the Superman Classic championship in the process and averaging a 30-point margin-of-victory.

Hosting Caruthersville Tuesday night Charleston picked up their second 54-point decision in that span, reeling off back-to-back 31-point quarters to down the Tigers 90-36.

“Once you get a score like that you want effort,” Bluejay’s head coach Danny Farmer said. “I thought we played hard, and the effort was there. It’s getting to the end of the season, and we’re trying to have depth and are playing a bunch of people.

“We went to the tournament this weekend, and we were playing eight to nine people and played well. We played a bunch tonight, and we’re looking to do that in every game to have some depth in the postseason.”

Caruthersville (8-6) trapped slowed Charleston (16-3) to start the game allowing the Tigers to trail by only a couple possessions, 10-6, four minutes into the contest.

It wasn’t long after, however, that the Bluejays found their groove.

A 9-2 run to end the first quarter pushed Charleston’s lead to double-digits, and they continued to build from there.

Eight straight points to start the second quarter helped the Bluejays continue to gain momentum, and by the half Charleston was firmly in control, heading into the locker room up 50-20.

A 30-point advantage grew to 50 near the end of a third-quarter that saw the Bluejays outscore the Tigers 31-13 to guarantee a turbo-clocked fourth.

“We got going after starting slow,” Farmer said. “That’s what I’m afraid of a lot of times. Sometimes it takes us a half before we get going. We’re going to have to get after it and start faster.” 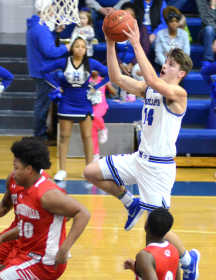 On a night where his team won big, senior Sam Bledsoe hit a career milestone he’d been working toward since his freshman year.

In the third quarter, Bledsoe hit his fifth 3-pointer of the night to give him 200 career threes.

He finished the night with six to leave his mark at 201, shooting 6 of 11 from long range, including six of his final eight attempts.

Bledsoe’s 22-points led the team, adding five rebounds and four assists to the cause.

Terridean Bogan was close behind with 20 points, shooting 7 of 9 from the field and adding six assists to the cause.

Blessin Kimble was the third Bluejay in double-figures, scoring 17 points to go with seven boards and three assists.

“He’s been playing great for us,” Farmer said of Bledsoe. “So has Terridean and Kimble. I have guys coming off the bench playing great too.”