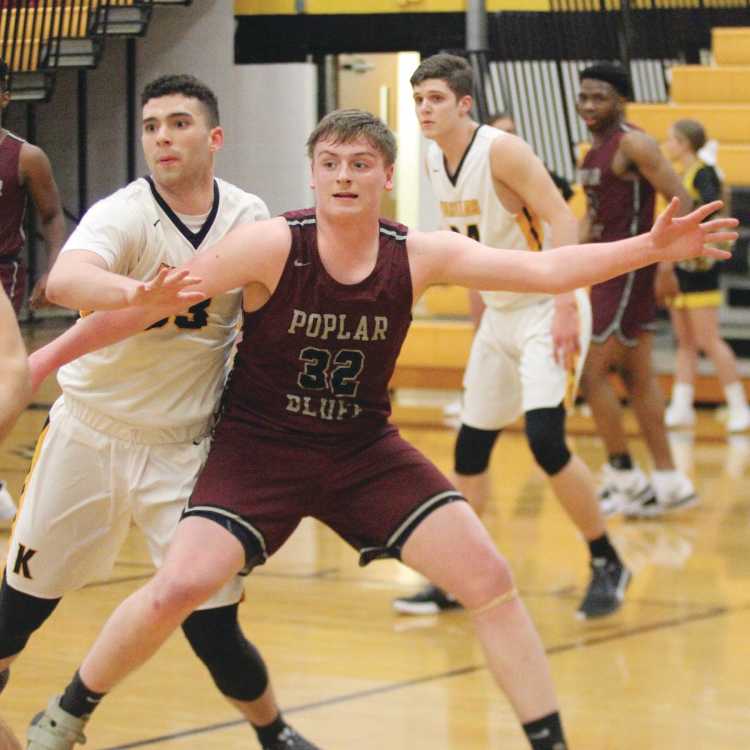 “We’ve really found some consistency lately,” Kennett coach Andrew Halford said. “So much of our success comes down to taking care of the basketball and rebounding on the defensive end. We’ve done a solid job of late on defense and rebounding the ball.”

Kennett, which had five players finish with at least eight points, struggled to find a hot hand early.

Kennett moved ahead 14-13 a couple of minutes later when Ben McMullan hit a 3-pointer with six minutes left in the first half.

“We had a slow start to the game tonight just like we did last week against Saxony,” Halford said. “That doesn’t bother us a whole lot because we feel like at some point we are going to have shots fall and get to the free-throw line.”

Poplar Bluff tied things up again at 16-all with 4:00 left in the first half when Joseph Hardimon hit his second 3-pointer of the night.

Things remained tied at 20-all in the final minute of the first half before Marsayv’aun Harrell recorded an old-fashioned 3-point play with 16 seconds left in the second quarter to put Kennett on top 23-20 at halftime.

“We lost some assignments in the second and third quarter,” Poplar Bluff coach Will Durden said. “We let them get some wide-open 3’s and they got it going. When you make a couple the gap gets a little bit wider and then the next two or three go in. They made six 3-pointers in the third quarter. You just cannot give up that many shots and expect to win.”

Kennett continued to lead by double digits at 49-38 at the end of the third quarter. The Indians increased its lead as large as 65-51 in the fourth quarter before Poplar Bluff cut the final margin to seven points.

Ben McMullan hit half of the Indians’ eight 3-pointers. He finished with a team-high 18 points.

“We’ve shot the ball really good from the perimeter this season,” Halford said. “I’ve told a bunch of people, ‘We rely on it a little bit too much at times.’ But when we get to knocking those down and playing with confidence the outside shot is a good weapon for our squad.”

“We’ve got to continue to have contributions from everyone,” Halford said. “I think Carter Maddox scored six points in the second quarter off of offensive rebounds. When him and others get into that six to nine-point range it makes us tough to defend.”

“We missed too many layups around the rim tonight,” Durden said. “They played us physical and we missed too many chip shots. If we would have made a couple of those maybe the game is a little closer. We’ve got to make sure we are concentrating on offense so we can make layups.”

“I think we’ve played six state-ranked teams in our last seven or eight games,” Durden said. “We’ve played good teams from Missouri, Tennessee, and Kentucky. We’ve played some great competition and been very close to walking away with a win. We are just missing a few assignments on defense and not taking advantage of situations on offense. We’ve got to keep working hard if we are going to get to where we need to be by the end of the year.”

“Friday is the biggest game of the year so far,” Halford said. “That’s the way we are looking at it. We’ve lost to them and New Madrid County so they would both be ahead of us in the district seedings if we seeded it today. The seedings will be important when we get to that point but winning on Friday is more important than anything right now. If we are going to get out of our district we’ve got to find a way to get past Charleston."