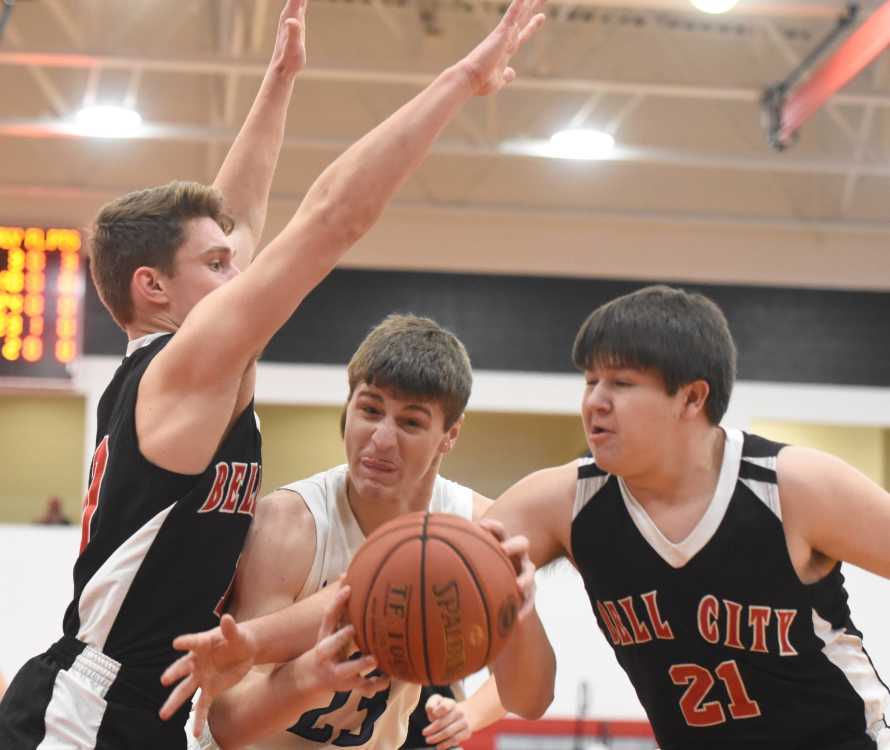 DEXTER Ś The eighth-seeded Bell City Cubs were up to the challenge early.

The Cubs kept pace with top-seeded Bernie for most of the first half before losing the first round matchup of the SCAA boys basketball tournament 74-42 Tuesday at the Bearcat Event Center.

The Mules, who beat Bell City 84-36 earlier this season, started fast, before the Cubs began to get on a roll.

Bell City scored many of its points in transition, beating the Mules down the court for easy baskets.

ôWith our offense, itĺs made to pass and cut and move,ö Bell City coach Dom Johnson said. ôWhen we run it the right way and do it right, we can score a lot of points off it and get behind defenses who like to pressure. Bernie likes to pressure the ball.ö

The Mules took a 14-3 lead behind a pair of 3-pointers by Landon Zoll, who scored a team-high 24 points, and one by Blake Harty, who added a jumper for a 2-0 lead.

Luke Nichols, who led all players with 30 points, sank a 3-pointer to give the Cubs a 3-2 lead before Bernie scored 12 straight points.

Bell City sliced its deficit to six (14-8) on a basket and a free throw by J.T. Robey, who returned to action Tuesday after missing seven games because of a broken foot, and a basket by Nichols.

Andrew Geohagan interrupted the 6-0 run with a basket inside, but the Cubs responded with another 6-0 rally to cut Bernieĺs lead to two points.

Nichols scored all six points. His free throw cut his teamĺs deficit to 16-14.

Long said his team struggled defensively in a couple of areas.

ôNo. 1, keeping Nichols in front of us. Heĺs a good player,ö Long said. ôThen, some things in the area of discipline where we were not helping, (in the) proper position and overplaying to the point where weĺre getting beat backdoor. Things that we spend a lot of time practicing on. To the kids credit, they recognize it. If they recognize it, it probably means I need to be a little more patient and (let them) keep working.ö

Tyler Suiter scored a pair of baskets in the paint, and Nichols scored his 12th and 13th points of the quarter. Bernie took a 20-16 lead into the second.

A key to the Cubsĺ early success was limiting turnovers. They committed only three against Bernieĺs press in the first quarter.

ôSince weĺve lost our two bigger kids earlier this year, weĺve tried working the ball a little more, trying to be patient on offense and not being in a hurry,ö Johnson said. ô(Weĺre) not trying to play fast against teams we canĺt play fast with.ö

The Mules scored seven of the first eight points of the second to extend their lead to 10 (27-17).

Bryson Maddox sank a 3-pointer to slice Bernieĺs lead to 31-25, but the Mules closed the quarter on an 11-0 run to take a comfortable 42-25 halftime lead.

The Cubs never came closer than 18 in the third.

ôThe second and third quarters were good for us,ö Long said. ôThey were pretty good efforts for us. We just got off to a slow start and when you get off to a slow start, you kind of have that Ĺughĺ feeling for the rest of the game, but you know thatĺs part of it.ö

Bernie, who missed eight of 11 3-point tries in the third, made three straight near the end of the quarter to push the lead to 63-35 by the start of the fourth where the clock ran continuously for most of the period.

Zoll made the first two 3-pointers and Brent Gage sank a 3 with one second left.

ôBrent had a big 3 at the end of the third quarter and Landon had a couple of 3s there,ö Long said. ôHe got hot and the 3s definitely add up.ö

Zoll added two 3-pointers in the fourth quarter and finished with seven overall. Bernie made 10 3s in all.

This season, the SCAA introduced a consolation bracket for the first time since 1935, as conference officials want all county tournaments to have one, according to tournament director Josh Dowdy.

Johnson was pleased with the decision.

The conference played a double-elimination tournament in the first half of the 1930s but used a different format.