Bombs Away: Dexter boys basketball makes 27 3s in 107-26 rout of Woodland in first round of SCAA 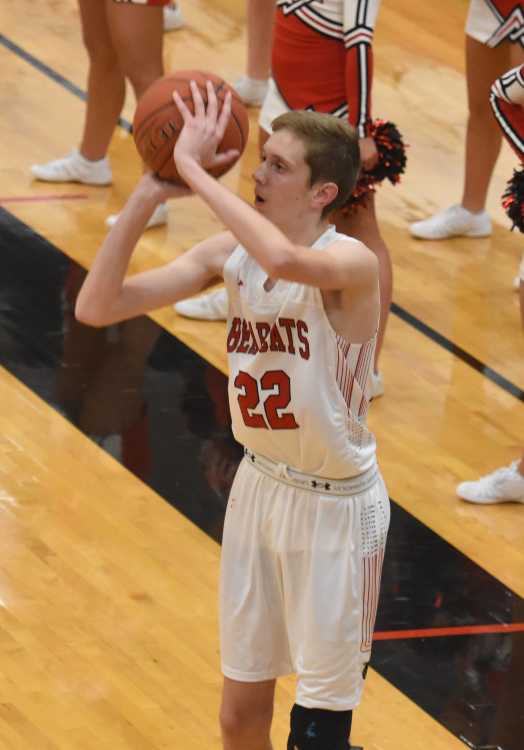 Dexter's Jackson Allen attempts a 3-pointer against Woodland during the fourth quarter of the first round matchup of the SCAA boys basketball tournament on Monday night at Dexter. Allen broke a school record with 12 3s in the game.
DEXTER STATESMAN/Kyle Smith

DEXTER — The Dexter Bearcats have struggled at the start of their previous three games and were in need of a fast start Monday night.

Allen broke a school record for most 3-pointers in a game (12), and the Bearcats made 27 3s in all and routed seventh-seeded Woodland 107-26 in the first round of the SCAA boys basketball tournament at the Bearcat Event Center. 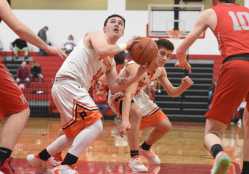 Puxico's Lucas Plunkett (14) eyes the basket between a pair of Richland defenders during the first quarter of the first round game of the SCAA boys basketball tournament on Monday night at Dexter.
DEXTER STATESMAN/Kyle Smith

Allen broke the school record previously held by Ben Sindle, who made 11 in a game in the 2016-17 season. The junior’s feat is tied for eighth-best in state history, according to the MSHSAA record book. Jon Beck, of Scott City, and Brandon Wagner, of Park Hills Central, share the record of 16.

Allen’s eight first-half 3s are tied for seventh all-time, according to MSHSAA. Wagner holds the record with 11.

“He’s definitely a good shooter,” Dexter coach Chad Allen said of his son. “Of course, his teammates were encouraging him on. He definitely had a good night shooting.”

The Bearcats’ 27 3-pointers rank second all-time behind Meadow Heights, who holds the record of 36 set in 2006. Scott City and Meadow Heights are tied for third with 24.

The Bearcats will meet Advance in the championship semifinals at 8:30 p.m. Thursday. Third-seeded Advance beat sixth-seeded Bloomfield 73-39 in the first round.

In Monday’s other first round game, fifth-seeded Richland upset fourth-seeded Puxico 49-46. Richland will meet the Bernie-Bell City winner in the championship semifinals at 7 p.m. Thursday.

Bernie and Bell City are scheduled to play at 4:30 p.m. Tuesday.

The Bearcats shot out to a 62-point halftime lead behind 17 first half 3-pointers.

“We shot the ball extremely well, especially in that first half,” Chad Allen said. “You definitely want your kids playing hard. We played extremely hard that first half. It just seemed like everything we threw up was going in.”

Dexter held the Cardinals to no field goals in the second quarter. Woodland went 0 for 6 from the field. Jasper Storie made a free throw with 1:51 to play for Woodland’s only point.

“We put fresh bodies out there,” Chad Allen said. “It’s definitely a plus. (Depth is) a good thing to have. I thought we were pretty active for the most part defensively tonight, especially that first half. We tried to pack it in the second half and not get out and pressure.”

Dexter held a 17-9 scoring advantage in the third quarter and extended its lead to 90-20 entering the final period. The clock ran continuously in the fourth because of the 30-point mercy rule.

The Rebels withstood a furious comeback attempt by Puxico to advance to the championship semifinals.

The Rebels (5-10) led by as many as 12 points early in the third quarter when Matt Finch scored inside for a 30-18 advantage.

A putback by Caldwell tied the score at 38 in the fourth quarter, and Caldwell hit a pull-up jumper for a 40-39 advantage, the Indians’ first lead since 16-15 in the second quarter.

The lead changed hands four times and the score was tied twice in the fourth quarter.

The Rebels took the lead for good on Tanner Freeman’s 3-point play, which gave them a 47-45 advantage with 2:17 to play.

Ethan Helm made a free throw with 30.2 seconds left to cut Richland’s lead to 47-46, and Freeman clinched the win with a 3-pointer with 25.9 seconds to go.

Puxico ran down the clock and attempted a 3-pointer before the buzzer, but the shot didn’t fall.

Richland’s Damon Ivy scored a game-high 22 points, and Freeman had 11.

The Hornets took control over the middle two quarters, outscoring Bloomfield 47-25 en route to a first round victory.

Advance (14-3) led 15-10 after one quarter but pulled ahead 34-21 at halftime and 62-35 after three quarters. The clock ran continuously for much the fourth because of the 30-point mercy rule.

Advance’s Jack Below scored 25 of his game-high 35 points in the second and third quarters.

Jaren Schrader scored seven of his 13 points in the second quarter, and Landon Dailey finished with 10.