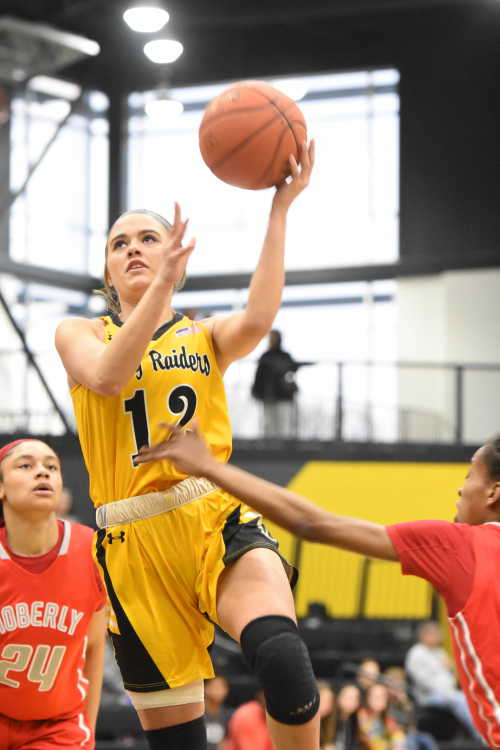 With a dominant defensive effort, Three Rivers beat the Greyhounds 86-57 on Saturday at the Libla Family Sports Complex after losing to the Greyhounds twice earlier this season.

"I hope it made a statement. I hope it sent a message to them," Three Rivers' Katelyn South said.

Three Rivers limited Moberly Area to three field goals in the second quarter and just one in the third quarter. The Greyhounds shot 22.7 percent for the game.

"These kids poured their heart and soul into this one," Three Rivers coach Jeff Walk said. "We came out and pretty much dominated on defense. We did what we wanted to do defensively and them out of what they want to do."

Fifty-seven points are the second-fewest Moberly has scored in a game this season. The loss is their first in Region XVI play and ends a seven-game winning streak dating back to Dec. 7 when the Greyhounds scored 53 points and lost to Crowder a day after playing Three Rivers.

Moberly beat Three Rivers 71-63 in the Region XVI Showdown after not playing in a week, and then won Jan. 10 at Moberly after going 34 for 55 on free throws, more than double its number of attempts in any other game this season. Three Rivers was 7 for 15 from the line in that game.

"I didn't feel like we were mentally ready for those two matchups," Walk said. "We rebounded (from Jan. 10). We didn't change anything from what we were doing up there to what we were doing down here. We played on both sides of the basketball and we were the aggressor. We were trying to get every loose ball."

"When we're all on the same page, we get a lot of stuff done," Three Rivers' Autumn Dodd said.

Yelder led Three Rivers with 17 points. while Jordan Little got 15 and Deanay Watson had 13.

The Raiders, third in the country in points per game, scored five points through the first 6 minutes of the game but were still down by just four points as both teams struggled to find a rhythm.

Then Watson jumped a pass and laid in the fast break. Next possession, Thurmon grabbed a rebound, found Chaylea Mosby on the outlet, and she dribbled down the sideline before finding Yelder with a swing pass for an open 3.

It gave the Raiders the lead for good and had Moberly calling for a timeout.

"If you don't call that timeout we probably rack off 15 in a row," Walk said. "Once we hit that stride, look out. We can flat put it in the basket."

It was a three-point game with a minute left in the first quarter. Next time the Greyhounds scored anything other than a free throw, the second quarter was more than half over and the Raiders were ahead by 15.

In the process, Three Rivers took control with a 15-2 run that started when Thurmon closed the first quarter with a 3-pointer following an offensive rebound. Then she kickstarted the second quarter with another 3.

Little added a third 3 on the Raiders' next possession and suddenly Three Rivers turned a two-point lead into a 10-point lead in barely a minute.

Soon after, Thurmon found Yelder on a backdoor cut and she scored through a foul.

Little added a pair of free throws for second-chance points, and South drove and scored to put the Raiders ahead 33-18 a little more than 4 minutes left in the half.

Moberly Area had just two field goals in the second quarter but was able to keep pace with the Raiders in the closing minutes by going 7 for 8 on free throws.

The Raiders also went cold after taking control and their only field goal in the first half after going ahead by 15 was a 3-pointer from Yelder. Still, they went into the locker room ahead by 13.

The Greyhounds briefly cut the lead to nine points at the start of the third quarter, but wouldn't get another field goal until Kaysie Newsome made a 3 to start the fourth quarter.

Yelder, who led the team with 17 points, made a 3 and Mosby followed with a three-point play.

With 5 minutes left, Bi'Anna Pettis was fouled dribbling up the court, but slammed the ball after the whistle and was called for a technical. Little made both free throws to put the raiders ahead by 16.

"You've got to be able to play every single second because offensively, you can't rest against us," Walk said. "You've got to know where all the shooters are at because we've got five kids out there we let shoot."