Southeast powers to another road win in women's hoops

When Rekha Patterson and her team have ice cream after a road game, it means one thing.

“It means we won,” said Patterson, who enjoyed a vanilla milkshake after her squad’s second straight victory away from home, as Southeast defeated another Ohio Valley Conference foe, Eastern Illinois, 77-65.

Saturday’s win was the cherry on top of an impressive run for her Redhawks, who have begun to establish a pattern – a blazing hot first quarter, a sluggish second, a third quarter rebound and then a less-than-stellar fourth. 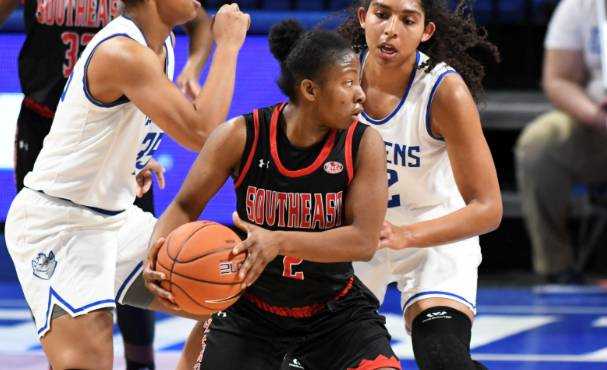 Senior Carrie Shephard led Southeast’s scoring with 23 and Tesia Thompson had a double-double with 17 points and 13 rebounds. Thompson, a junior from Memphis, Tn., also led the Redhawks with six assists.

“As impressive as Tesia’s (overall) numbers were,” Patterson said, “I loved the way she started – with offensive boards, putbacks and add-ones.”

“I wish we could bottle up what we do in the third quarter,” Patterson mused, “and spread it around the game a little.”

Southeast, which began the contest with a 14-2 stretch only to see EIU go into halftime on a 9-0 run, turned on the jets after intermission – stretching its lead to 24 by the opening moments of the fourth frame.

Southeast never trailed but, as has been the case in recent outings, had a lackluster finish, being outscored in the final ten minutes, 25-15.

“In the fourth quarter, we didn’t contest (EIU) with a sense of urgency,” said Patterson. “We need to work on that in practice this week.”

One game after an 0-for-11 three-point performance Thursday against SIUE-Edwardsville, the Redhawks connected on six treys against Eastern Illinois.

Carrie Shephard connected on five of them for Southeast - and she was also 4-for-4 from the charity stripe.

Shepherd, the oldest and most diminutive of the Redhawks at 5-foot-4, has earned freedom from Patterson to shoot three-pointers.

“(Carrie) has a green light when it comes to the basketball,” said Patterson, whose overall mark at Southeast is now nearing the .500 mark in her fifth year at 68-69.

“She is a smart basketball player and doesn’t force things.”

Patterson gave credit to sophomore Taelour Pruitt for her 3-for-3 foul shooting, her 10 points, four assists and three steals.

LaTrese Saine does not usually break into double digits for Southeast but also added 10 points and had six rebounds for the winners.

For the EIU, three players were in double figures: Lariah Washington, Karle Pace and Morgan Litwiller, who had 17, 14, and 13 points respectively.

“Brady hired me and took a chance of me,” said Patterson, who was on Sallee’s staff his first two years at EIU. “I’m forever grateful to him.”

Patterson is establishing her own legacy at Southeast – skippering the team leading the OVC in scoring.

Asked if Southeast is now the team to beat in the league, Patterson’s answer was immediate.

“No,” said Patterson. “Belmont is the reigning (OVC) champ and UT-Martin is ahead of us too.”

In the current OVC standings, Southeast is fourth behind Tennessee Tech (8-0 in OVC play) and Belmont and UT-Martin, both 7-1.

Southeast takes its five-game win streak to Kentucky next week with contests against two squads with losing records - Morehead State Thursday and Eastern Kentucky on Feb. 1 - before returning home to the Show Me Center.

“We approach every game like we’re 1-0,” said Patterson. “And that’s what we’ll do when we go to Kentucky too.”