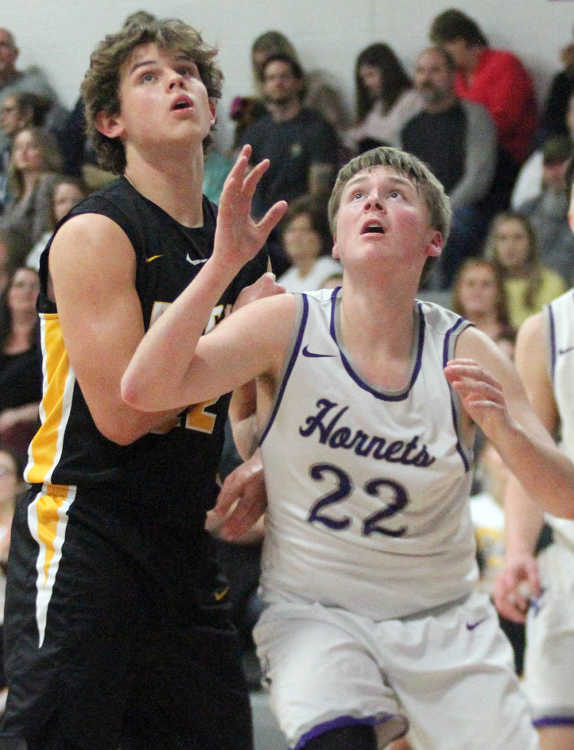 HOLCOMB, Mo. - It came down to the wire but the Holcomb Hornets varsity boys basketball team found a way to secure its third conference win of the week Friday night.

Holcomb’s Nate Rhew penetrated to the basket and hit a 2-point jumper to put Holcomb on top 68-67 with seven seconds left in overtime. Risco pushed the ball to the other end after Rhew’s clutch shot but was unable to score before time expired, allowing Holcomb to escape with a 68-67 overtime victory.

“It’s a great team win and it feels great,” Rhew said. “I took that last shot and hit it but I knew my teammates had my back and would get a rebound and put it back in if I missed it. We played as a team tonight. When we stay together as a team we play great.”

Holcomb took a 66-64 lead when Topher Kendrick hit a 2-point basket with 25 seconds left in overtime to break a 64-all tie.

Risco guard Kamron Meese followed with a 3-pointer to put his squad on top 67-66 with 15 seconds left. The Hornets pushed the ball down the floor quickly after Meese’s trey and got the ball in the hands of Rhew who delivered again.

Risco almost moved ahead again in the final seconds. The Tigers’ Braison Jackson missed a shot in the paint with a second or two left but Meese rebounded the miss and recorded a stick back about the time the buzzer sounded. The officiating crew gathered for a conference after the made shot and ruled time had expired before the ball left Meese’s hand.

“I wish we had instant replay in high school because it was hard to tell if he got the shot off,” Risco coach Brandon Blankenship said. “But the refs worked hard all night. We just didn’t get big defensive stops when we needed them. There were two or three possessions when we needed a stop out of a timeout and didn’t get it. But hats off to Holcomb because they played with great energy and they deserved it tonight.”

Neither team led by double digits in the instant classic.

Risco enjoyed a 15-11 lead after the first quarter before Holcomb moved ahead 29-28 by halftime.

Holcomb increased its lead as large as 39-30 with 4:32 left in the third quarter.

Risco narrowed Holcomb’s lead back to one at 45-44 by the start of the fourth quarter and eventually led by as much as 54-50 with 3:51 left in regulation.

But Holcomb scored the next eight points to move back ahead 58-54 with 1:03 left in the fourth quarter.

Meese made a pair of free throws to tie things up at 59-all with 19 seconds left in the fourth quarter.

Both teams failed to score on their following offensive possession, leaving things tied at 59-all at the end of the fourth quarter.

“Basketball is a game of runs,” Holcomb coach Michael Snider said. “It’s all about trying to limit their runs and maximize your own runs. But the kids got down and guarded hard tonight and they deserved this one.”

Meese, who hit a team-high six 3-pointers, paced Risco with 26 points. He hit a 3-pointer at the end of the first and the second quarter.

“Tonight is a big-time win for us on our Homecoming,” Snider said. “It’s been a long time since we’ve beat Risco. We tell our kids all the time if you want to be the top dog you’ve got to beat the top dog. Risco has been the top dog for years in this conference and we finally got one against them tonight.”

“I felt like we were battle-tested heading into this week after playing Campbell and Neelyville earlier this month,” Snider said. “I hoped we would be able to compete in all the games we played in this week, especially this game. And as it turned out we competed well and ended up winning all three games. And I cannot be more happy for the kids.”

Risco (8-7) had won five straight games in January before falling to Holcomb on the road. The Tigers also support a record of 3-1 in Tri-County Conference regular-season play.

“We knew our schedule was really tough earlier in the season,” Blankenship said. “We had our first nine games in 18 days. Getting back in the gym over Christmas helped us. We made some adjustments and once the guys got a couple wins under their belt this month they started playing with some confidence. We are playing better together now. And I think that’s been key for us.”