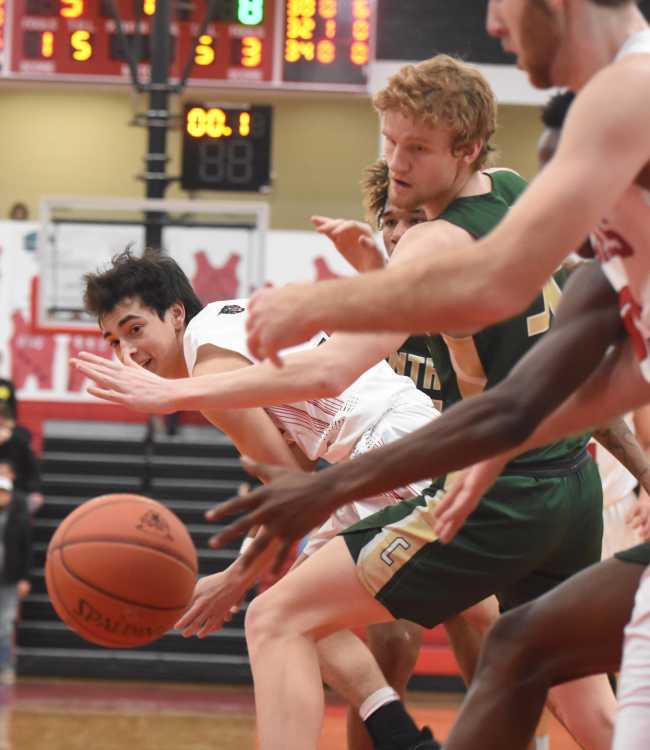 Dexter’s Carter Dorton (left) and NMCC’s Ansel Underwood watch as a ball goes out of bounds under the Dexter basket during the first quarter Friday, Jan. 24, 2020, at the Bearcat Event Center in Dexter.
DEXTER STATESMAN/Kyle Smith

The Bearcats boys basketball team cut an 11-point fourth quarter deficit to one in the closing seconds before falling short 47-46.

“That was a fan’s game right there,” NMCC coach Lennies McFerren said. “If you’re a fan who loves basketball, you would’ve loved that game right there. That was one for the ages.”

Dexter coach Chad Allen was impressed by how far the Eagles have come since the two teams met in the SEMO Conference Tournament in December at Sikeston.

“There’s no question in my mind that this New Madrid team is 100 times better than the team that we played early in the SEMO Conference Tournament,” Allen said. “They’re guarding so well.”

The two teams met in the play-in game with the Eagles rallying from a 9-point second-half deficit to win 66-61.

On Friday night NMCC pushed its lead to a game-high 11 points at the start of the fourth on consecutive fast-break baskets by Ansel Underwood and Bryshawn Williams.

After Austin Davis scored on a fast break following a steal by Bryshawn Williams, Henson scored a traditional 3-point play, and NMCC’s lead was sliced to 43-38.

The Bearcats scored eight of the game’s final 10 points.

The Eagles (11-7, 3-2 SEMO) missed three straight free throws over that stretch before Bryshawn Willams hit to two with 1:21 to go.

Ellinghouse followed with a 3, and NMCC’s lead was reduced to 47-46 with 1 minute left.

Dexter (8-6, 0-3) missed the potential go-ahead basket in the paint and committed a turnover on the next possession. Meanwhile, the Eagles missed the front end of a one-and-one.

After the turnover, a NMCC player was fouled but he missed both free throws with 3.1 seconds to go, and a Bearcat and an Eagle got tangled up battling for the rebound. The play was ruled a jump ball, and Dexter got possession under the NMCC basket with 1.4 seconds left.

The Bearcats couldn’t get the ball to a shooter on the inbounds pass, and NMCC held on for the win.

“I’m proud of the guys,” Allen said of his players. “To get down and be able to come back and have a chance to win at the end, that’s all we can ask for. I’m just glad our guys kept their composure and gave us a chance to win it at the end.”

McFerren liked his team’s moxie late in the game.

“The second half, they had all kinds of reasons to fold, but they just stayed the course,” McFerren said. “That was the difference in the game.”

Dexter’s Henson scored a game-high 17 points and Ellinghouse finished with 10.

Ke’von Williams paced the Eagles with 15 points and Bryshawn Williams had 14.

The Eagles took a 4-0 lead when Bryshawn Williams scored inside and Shamar Williamson drove the baseline for a layup.

Dexter didn’t score its first points until 3:20 remained in the first quarter when Henson scored on a pass from Dylan Sitze.

Henson took an inbounds pass, drew a foul, made the basket and hit a free throw to give the Bearcats a 5-4 advantage — their only lead of the night — less than a minute later

Bryshawn Williams made a pair of steals and layups to end the quarter with the Eagles leading 8-5.

“He’s the defensive specialist,” McFerren said of Williams. “He’s the man. So he goes, so we go, and he played some defense tonight.”

The teams combined for only 17 shots in the first quarter, as each team passed around the perimeter waiting for a teammate to become open, which didn’t happen often.

NMCC pieced together a 7-0 run to take a 17-6 lead in the second. Bryshawn Williams scored a pair of fast-break baskets, Underwood drove the baseline for two points and Ke’von Williams sank a free throw.

The Bearcats closed the half with an 9-2 run to slice their deficit to 19-15 at halftime.

Sitze made two free throws and Boles converted a turnover into a layup before NMCC scored to extend its lead back to nine points (19-10).

Henson scored inside on a pass from Jackson Allen, Sitze made a 3-pointer with 20 seconds left, and NMCC’s lead was reduced to four points.

Driskill’s driving layup sliced Dexter’s deficit to two points at the start of the third quarter.

NMCC stretched its lead to as many as nine points in the third. Ke’von Williams scored a traditional 3-point play to give his team a 33-24 lead.

The Bearcats cut into their deficit with a 4-0 run by Carter Dorton, who hit a 3-pointer, stole the ball from NMCC and made a free throw, cutting the visitor’s lead to 33-28.

The Eagles extended their lead back to nine on a putback by Underwood and a steal and layup by Davis.

Henson made two free throws with 1.2 seconds left, and NMCC took a 37-30 lead into the fourth.