“It was not a pretty game,” said fifth-year head coach Rekha Patterson, “but as someone once said – it’s not how but how many.”

SIUE put together a 13-1 run early in the game to take its largest lead, 15-5, at Sam M. Vadalabene Center. 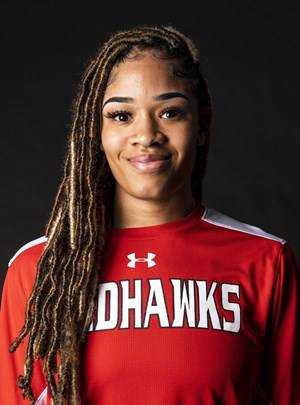 The game was tied six times and there were six lead changes in the contest.

Thompson nearly had a double-double as the junior from Memphis pulled down nine rebounds.

“Tesia didn’t start out great tonight,” Patterson said, “but her teammates picked her up.”

“(Jessie) hasn’t always had a lot of minutes for us,” added Patterson, “but she’s persevered.”

SIUE was paced by Kaitlyn Lee, who led all scorers with 18, including a perfect 10-for-10 in free throws.

Southeast is almost last in the league, 11th out of 12, in 3-point scoring defense and to press the point, the Redhawks gave up six 3s to the home team.

“Our team set a goal of not giving up more than six 3s in a game,” said Patterson, who is now 67-69 overall at Southeast.

“We met the goal tonight,” Patterson added, “but we put ourselves in a hole by giving up so many treys.”

With the victory, Patterson matches her win total for the entire 2018-19 season, when Southeast finished 13-17.

“I honestly didn’t know that,” said the North Carolina native, whose Redhawks are in fourth place in the league.

Patterson’s best mark with the Redhawks was her first season when the 2015-16 squad finished 15-15.

Patterson’s teams have yet to enjoy a winning record in the OVC.

Asked if this is the year SEMO breaks through, Patterson was circumspect.

“One day at a time, one game at a time,” Patterson advised. “The moment you start looking too far ahead, bad things can happen.”

For their part, the Redhawks failed to land a single trey in 11 attempts.

“We have players who can hit the 3 like Carrie,” said Patterson, “but three-point shooting is not a particular strength of our teams as a whole.”

The Redhawks identify three strengths as a squad – ability to push in transition, crashing the boards, and sharing the basketball.

“We’ve set team goals in terms of the opposition too,” continued Patterson. “We want to hold the other team under a certain number of points and to take more free throws than they do.”

Both objectives were met tonight as the Redhawks outscored SIUE by 10 and went to the charity stripe 13 more times.

Southeast has a tougher test Saturday as the Redhawks visit Eastern Illinois (11-7, 5-2 OVC).

“The Panthers can shoot the 3,” said Patterson, “and can get hot at the free-throw line.”

Next week, Southeast has two more road games on the horizon before coming home to the Show Me Center – Morehead State on Thursday and Eastern Kentucky Feb. 1.