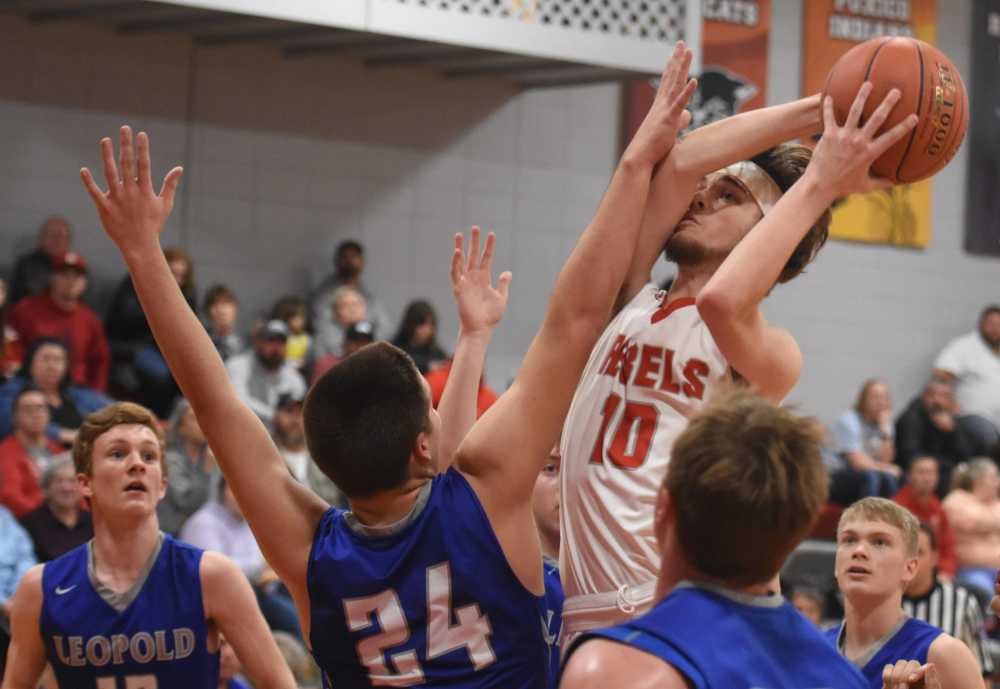 However, after limited warm-up time and a slow start, the Wildcats recovered quickly and cruised to a 65-37 victory over the Richland Rebels on Thursday night at Richland High School.

“We got here a little bit late, so I didn’t know how loose we would be,” Leopold coach Mark Kiehne said. “We hadn’t played many games since New Year’s.”

Two of their first three games were postponed because of weather before they lost a close one to a 12-2 St. Vincent team (57-53) on Tuesday night.

“Once we settled in, our last game and this game, we finally (started) hitting some 3-pointers,” Kiehne said. “That keeps everybody from just sagging in so much on Mason Deck. He’s our leader and our best player. The other boys play well off him.”

The Wildcats (5-8) made seven 3-pointers, allowing Deck an opportunity to operate inside. The sophomore scored a game-high 23 points with 14 coming in the second half.

“All of them realized, ‘I can’t get my second foul and if I do I’ve really got to behave the first half,’ ” Kiehne said. “We were never really in foul trouble.”

Partenberry scored four of the Rebels’ first nine points, Skylar Oakley made a 3-pointer and Damon Ivy scored inside.

However, Richland (3-10) didn’t score a point for the remainder of the first quarter, and the Wildcats finished on a 16-0 run. Cameron Abernathy scored six of those points and Caleb Schaab had five, including a 3-pointer.

Abernathy finished with 18 points, and Schaab tallied 17, including a team-high five 3-pointers.

“They saw what we were doing. They spread our defense out a little bit and then we got stagnant when we changed our offense around a little bit,” Richland coach Matt Cline said. “We were out of place and stood around quite a bit. We really just quit moving at all.”

The Rebels’ offensive woes continued into the second quarter where they made only 3 of 19 shots (16%).

“I feel like we played real lethargically,” Cline said. “We played a little bit like the ball’s a hot potato. We couldn’t get it out of our hands quick enough.”

Despite the Rebels’ cold shooting, Leopold only outscored them by five points in the second and took a 31-17 lead into halftime.

Leopold padded its lead by two points in the third and took a 47-31 lead into the final quarter.

While the Rebels twice cut their deficit to three points late in the third quarter — Ivy’s 3-pointer cut it to 41-28 and a 3 by Tanner Freeman sliced it to 44-31 — Leopold closed out the win in the fourth, outscoring them 18-6.

Freeman paced the Rebels with 14 points, Ivy had nine and Partenberry scored eight.

After allowing Richland to take 31 shots in the first half, the Wildcats permitted only 20 after halftime.

“I tell you what, our defensive rebounding was the biggest thing,” Kiehne said. “When they got one shot, we secured it.”

While Leopold won’t play again until Monday when it visits Greenville for a makeup game, the Rebels will host Southland on Friday night for homecoming.

“It was one of those nights that they need to forget and I don’t,” Cline said, “so that I can figure it out and we can try to improve from it.”