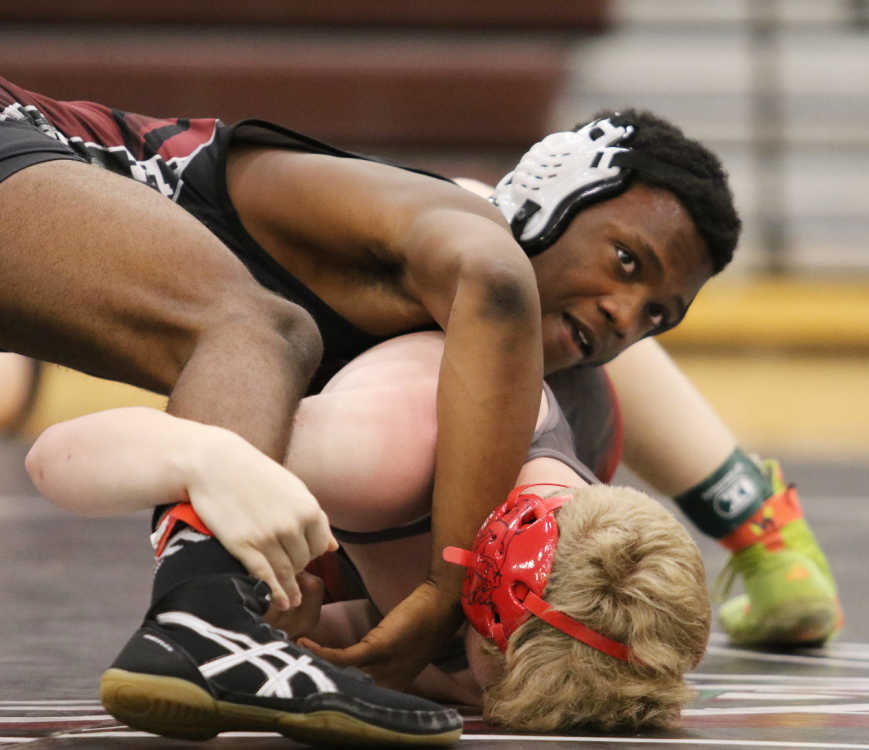 “He wears it sometimes,” senior Quinten Bell said. “We’ve got to remind him he’s at PB now.”

Steele said he doesn’t mind the attention his Tigers attire might attract.

“I love this team,” Steele said. “I like bugging them about Cape.”

Practice sweatshirt aside, the junior has made the transition to a new school and new program.

Last year as a member of the Central Tigers, Steele placed third in 160 pounds at the SEMO Conference Championships after starting the tournament unseeded.

Now, he’s seeded third at 170 pounds looking to help Poplar Bluff finish in the top three for the first time since 2009.

The tournament, which will be held at Jackson High School, starts Friday and continues Saturday morning with the finals scheduled to start around 4:30 p.m.

Based on the number of seeded wrestlers each team has, the Mules will be chasing three-time defending champion Jackson, Hillsboro and Farmington.

There are 10 returning champions, including Dexter’s Travis Waldner, who is undefeated at 170 pounds, and four from Jackson — Cole Amelunke (195 pounds), Noah Urhan (160), Garner Horman (152) and Alec Bailey (126). Bailey is a three-time champion while Ste. Genevieve’s Jacob Dickens and Waldner are two-time champions. Bailey defeated Waldner 3-2 in the 106-pound final their freshmen year.

Three returning champs are not even the top seeds in their weight class.

“Conference is tough this year,” Mules coach Kelton Thompson said. “You’re going to have to win two to three tough matches to be in the finals and win this weekend.”

“Seeds mean nothing,” Steele said. “You’re going to have to wrestle everybody anyway. Might as well do your best when you get out there.”

Last year wrestling at 160 pounds, Steele was pinned by Poplar Bluff’s Justin Mitchell in 46 seconds. He won his other two matches with pins but was pinned in the quarterfinal and ended up facing Mitchell again in the consolation semifinal, this time earning a pin at 2:25.

Steele went on to place third with another pin, beating the opponent who knocked him out of the quarterfinal.

“Going from opponents to teammates is always an interesting relationship,” Thompson said.

The Mules graduated their 170-pounder who finish second at conference and Steele moved into that division while Mitchell will wrestle at 160 again this weekend, seeded fourth.

Steele, who started wrestling three years ago, faces freshman Logan Goodluck in practice the most.

“We just pick out each other’s flaws,”Steele said. “I like wrestling everyone here. I’m making myself better so I’ll just wrestle anyone, anywhere, anytime.

“There’s a bunch of kids in the room that have really set examples,” Bell added. “It’s really nice for the younger guys.”

“We’ve tried to let him embrace that and run with it,” he added. “We’re still adjusting things he’s doing but we want him to use his strengths for sure.”

“He can do things on the mat that if other people tried to do that, they would be on their backs,” Thompson added. “It’s really his flexibility, his agility, but he has good mat awareness too.”

Admission is $4 for adults and $3 for students.