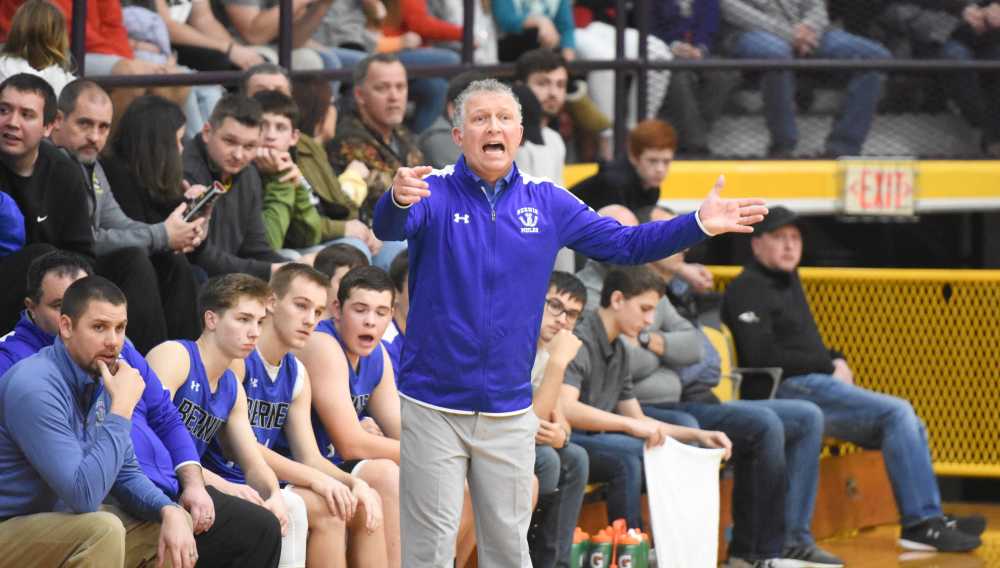 You coach in a school district with 230 students in grades 7-12. I’m guessing you wear a lot of hats in Bernie’s athletic department.

I’m from Bernie and coached in Malden for three years, Clarkton for two, and then back to Bernie starting in the fall of 2007. My wife works in the Dexter schools and we live in Dexter. I’m here for the duration.

You wanted to come home.

I could talk for hours about Bernie. I graduated from BHS in 1993 and was a point guard in basketball and a center fielder in baseball. I grew up very poor and disadvantaged in some ways. Ironically, I was advantanged, though, in my experience at school. Coming here was trying to give back – and doing that takes many years of service. There are dedicated, hardworking and committed kids here in Bernie – both boys and girls.

You didn’t have a smooth glide path to teaching and coaching.

After Bernie High, I went to Shawnee Junior College and got an associate degree but didn’t know what I wanted to do with my life then.

You went to work.

Williams Moving in Dexter hired me and it was a neat experience. I got to travel around the country helping people relocate. One time I helped move a family to Rhinelander, Wisconsin. I’d never before been that far north. There was a foot of snow on the ground. It’s a challenge to move people’s furniture in those conditions. We tried not to track slush into the house but it was hard. At some point I realized it was time to go back to school.

You picked a small university.

Yes, and one that no longer exists - Mid-Continent University in Mayfield, Kentucky. (The college closed in 2014.) I went there the first year the school offered basketball and baseball and was on scholarship. I was the leadoff hitter for the Cougars and was the first batter in the program’s history.

Clarkton was your first opportunity to lead a varsity basketball program and you did quite well.

The Reindeer were 44-8 in two seasons but I inherited a lot of talent. I showed up there at the right time. My tenure might have been a lot longer in Clarkton because it was a great situation but the Bernie opportunity was hard to resist.

You said you are in Bernie for the duration.

My wife and I talk about this a lot. There is no way I’d want to work anywhere else. Our oldest daughter is active in sports in Dexter and I get to see a lot of her games.

You didn’t play volleyball as a youth.

No, and I knew nothing about the sport when I started to coach it. Coaching girls has been a huge factor in my growth because I’ve learned there are other ways to get through to kids. I had been go-go-go, a more hard driving leader, but girls have taught me to be more versatile in my techniques.

You left a head coaching situation to take an assistant’s role.

In basketball, yes, that’s true, but understand I came to Bernie to assist the winningest coach in Mules’ history, Brad Botsch. (Botsch is now Bernie’s high school principal.) I was Brad’s assistant for 12 years before becoming head coach last summer. I like to say that the Botsch years were the second golden era of Bernie basketball.

What was the first?

When Paul Hale was here. (Hale is now in the hall of fame for Notre Dame Regional High School.) I played for Paul in the early ‘90s. He’s like a father to me. Paul is the single biggest reason I’m sitting here talking to you. What I know about humility came from Coach Hale because I was not a humble kid. I was lazy and thought I was a way better (athlete) than I actually was. I was not a good student either. Paul saw past all of this.

Is there a Jason Long coaching tree?

Jordan McGowan and Jeremy Walker are the head basketball coach and assistant, respectively, at Gideon High. Cameron Shipman is an assistant hoops coach at Malden.

Is there a Long basketball philosophy, a Long “system,” if you will?

If I had a choice between a better athlete or a smarter player, I’d choose the latter. At the end of the day, though, it’s really not about basketball. All kids have a passion for something. As a coach you can use passion to propel someone to a better life. This is what happened to me. Basketball gave me an avenue to rise up. As for a philosophy, it might be this: I want players to leave here having confidence – confidence to be successful and to be happy.

What kind of basketball do you like your teams to play?

I prefer man-to-man coverage and primarily that’s what we play. When I was younger, I wanted to play up-tempo a lot and always be in transition. Now, I like a disciplined game, trying to work the inside out, lots of passing, playing smart. We’re small across the board with five players under six feet, although we have two guys who are 6-foot-1 and 6-foot-5.

Do you have a personal sports passion?

I have no connection to the University of Missouri but I love Mizzou basketball. Never miss a game.

Any advice to a younger person considering coaching?

It can’t always be “my way or the highway.” Remove your ego from the situation. Evolve. Sometimes you will be wrong. Make mistakes and try to get better. Let advice roll off your shoulders. It is hard starting out because you’ll constantly be second-guessed. You can’t make everybody happy as a coach so you need to adapt and develop a tough skin – but not so tough you can’t admit to an error.

More from this columnist · Jeff Long
Comments
View 5 comments
Note: The nature of the Internet makes it impractical for our staff to review every comment. Please note that those who post comments on this website may do so using a screen name, which may or may not reflect a website user's actual name. Readers should be careful not to assign comments to real people who may have names similar to screen names. Refrain from obscenity in your comments, and to keep discussions civil, don't say anything in a way your grandmother would be ashamed to read.
Respond to this story