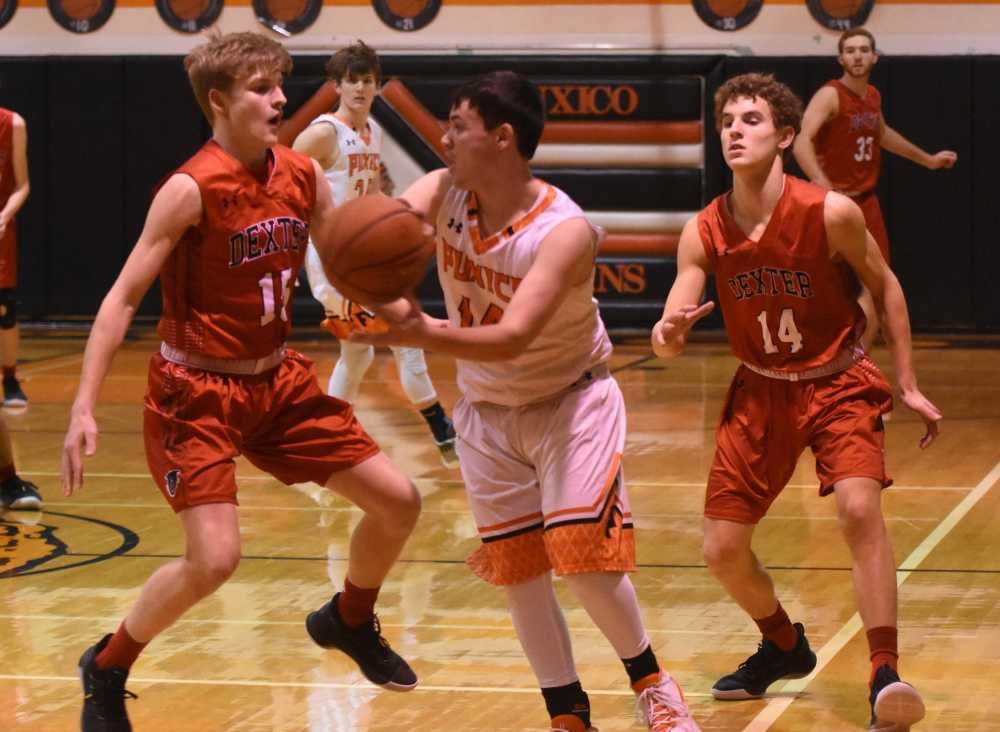 Ellinghouse scored 15 of his game- and season-high 30 points in the third, leading the Bearcats to a 76-40 victory over the Puxico Indians on Tuesday night at Puxico High School.

“He definitely took it to the rim hard and finished a lot better than he did in the first half,” Dexter coach Chad Allen said of Ellinghouse.

Ellinghouse scored off the dribble, from the perimeter and off assists from his teammates.

The junior scored 10 of the Bearcats’ first 13 points of the quarter, as they stretched their lead to 36-23.

Ellinghouse’s driving layup sparked a 9-0 run, and Dexter’s lead grew to 43-23 near the 3-minute mark.

Jackson Allen, who scored 10 points including two 3-pointers, finished on a pass from Garrett Henson after one of three Puxico turnovers in the third, and Cole Nichols made two free throws. Ellinghouse drove the baseline, made his shot and sank his free throw, extending the Bearcats’ lead to 20 points.

Nichols, who finished with 12 points, scored five points in Dexter’s quarter-closing 9-6 rally, giving the Bearcats a 52-30 lead going to the fourth.

After struggling on offense in the first half, the Bearcats sank 11 of 14 shots in the third quarter, including 2 for 3 from beyond the arc.

The Bearcats shared the basketball better in the second half.

“That’s what we preached at halftime,” Allen said. “We were content to hold it and not attack the gaps. I thought we did a much better job of that in the second half.”

The Bearcats received a spark from their defense in the second half.

“Defensively, we had to change (and) try to do something different to create some offense,” Allen said. “After we started out in our 1-2-2, we switched to a full-court matchup. We did some of our 1-3-1 half-court trap. We just tried to mix it up a little bit. I think that helped us a little bit.”

Falling behind by double digits, the Indians tried to keep pace from the 3-point line but went 0 of 7 from the field and trailed by 22 points with one quarter to play.

Despite the loss, Puxico coach Jim Jones said his team is getting better as the season goes along.

“We’re progressing a little bit,” Jones said. “We’ve had some tough losses, but a half like (the first) makes us better.”

After starting the season with one win in six games, the Indians are 4-5 since.

The Bearcats (8-5, 3-1 SCAA) came out hot from 3-point range following the opening tip, making their first four shots and taking a 12-3 lead.

However, they cooled off from outside, missing the next 15 shots of the half.

Dexter struggled from inside, too, going 2 for 13 from inside the arc over the opening two quarters.

Matt Caldwell sank a 3 and 1 of 2 free throws and the Indians trailed 14-6 after one quarter.

The Indians (5-10, 1-2) sliced their deficit to three points twice in the second quarter.

After Ellinghouse scored on a feed inside from Allen, Puxico scored the next seven points. Ethan Helm, who paced Puxico with 15 points, hit a 3-pointer and a baseline runner, and Dalton Andrews gathered a steal and scored a layup, cutting the Bearcats’ lead to 16-13.

Helm’s second 3-pointer of the quarter trimmed Puxico’s deficit to 19-16, but Ellinghouse went 4 for 4 at the free throw line to extend the Bearcats’ advantage to 23-16.

Lucas Plunkett sank a 3 in the closing seconds, and Dexter took a 23-19 lead into halftime.