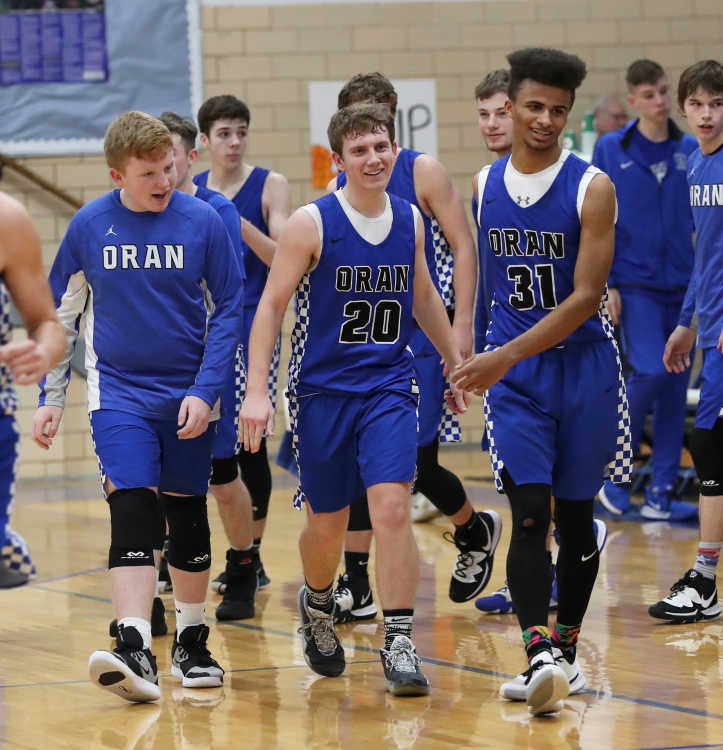 However, the seniorĺs biggest play came on the defensive end, as the Eagles outlasted the Mules in overtime, 47-45.

Senior Skyler Schwent had the ball in his hands, and as time was winding down, he tried to pass the ball to the right corner.

Goodale, though, read Schwentĺs pass perfectly and intercepted it just as time was about to expire, for the win.

ôWe talked about in practice how they do the backdoor cuts and all that,ö Goodale said. ôItĺs usually my job to get the backdoor, and throughout the season, I havenĺt been doing that. Over the weekend, Iĺve been thinking about getting those backdoor cuts, and today, I just read his eyes.ö

Goodale neared a double-double with 17 points and nine rebounds. He shot 7 for 11 from the floor and was a perfect 3 for 3 at the free-throw line, including scoring the only two points of the overtime period on a pair of foul shots.

Langdon Scheeter finished with 16 points, on 4 of 10 shooting, and made Ś at the time Ś the biggest shot.

With one possession left at the end of the fourth quarter, Scheeter got to the lane, made a nifty spin move, and got a floater off that hit the bottom of the net. His shot tied the game at 45.

ôWe were just running some ball picks off of it and trying to get some movement,ö Oran head coach Joe Shoemaker said. ôAnd then trying to isolate where they didnĺt have help on them. You know, Langdon had been shooting the ball well, and Tyson crashes hard. So, if they slide off and help off Ty or Tyson, weĺve got two good rebounders going to the weak side. And, thatĺs if he misses. If he makes it, then we got a great look at it, and thatĺs all you can ask for out of the end of the game.ö

Bernie, though, still had one last hope for a last-second win.

Senior Blake Harty got a good look at the rim from three-point range, but the shot was off-the-mark to send the game into an extra period.

The fourth quarter proved to have its share of lead changes.

Bernie was the first team to regain control to start the period after junior Landon Zoll drilled a three-pointer in the left corner to give Bernie a 33-31 lead with 6:15 left.

Coming down to the visitorĺs side of the court, the Eagles got nearly the same look, as junior Dane Shands hit a three from the right corner, and in turn, gave the lead right back to the guests, at 34-33, with 5:40 remaining.

Harty would then give Bernie the lead again, after using a ball fake to make the Oran defender bite, and then scoring on a jump shot at the free-throw, off one dribble. Hartyĺs basket made it a 35-34 contest with just over five minutes left, and the lead changes didnĺt stop there.

After Scheeter knocked down a pair of free throws to give Oran itĺs second lead change of the period, Bernie answered after Zoll got near the right corner and jetted a pass to Andrew Geohagan for a layup, making it a 37-36 game with 4:10 left.

Goodale only scored three points in the final period of regulation, but they came at an opportune time. With 3:22 left, the senior went up for a rebound, secured it, and finished strong, while converting on his ensuing shot and drawing a foul to head to the charity stripe for an and-one.

Yelling out a roar of emotion, along with the Oran bench and fans showing the same excitement, Goodale composed himself quickly and made his foul shot to give the Eagles a 41-40 lead.

Staying level-headed and not letting the moment get to them was a major factor in Oranĺs win.

ôOur kids did a great job of battling tonight,ö Shoemaker said. ôThatĺs a very well-coached team, and I told them that they execute better than anybody weĺve played all year with their stuff. Coach Long does a great job. Great shooters, good post players, and just an all-around good team. Itĺs always a battle when we come down here. You can throw records out the window; it doesnĺt matter; itĺs a battle.ö

Another factor in the win was aggressiveness.

Oran went to the foul line 15 times, making 13 attempts. Bernie went to the line six times and made three attempts.

In the end, Bernie's head coach Jason Long knows that his team needs to be able to get to the line more.

ôWe have not shot a lot of free throws all year,ö Long said. ôTonight was a really difficult matchup for us. Weĺve got a big kid that can score down low, but defensively the matchup was a tough one for us. So, we chose to go with a different lineup. We did get some good penetration, especially in the second half, but we need to try to find a way to get to the free-throw line more.ö

Oran hosts Chaffee, at home, today, with junior varsity starting at 6 p.m., and varsity to follow.