Poplar Bluff defense leads to offense in win over Naylor 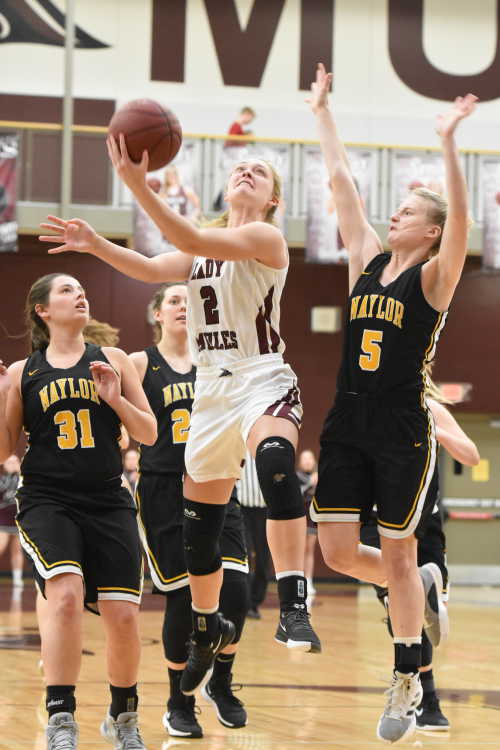 Poplar Bluff's Kiley Bess tries for a layup while being guarded by Naylor's Kaylynn Johnson (5) and Faith Sullivan (31) on Monday, Jan. 20, 2020, at the Senior High Gym in Poplar Bluff.
DAILY AMERICAN REPUBLIC/Scott Borkgren
Order this photo

Poplar Bluff didn’t allow a field goal until for the first 12 1/2 minutes.

A pair of free throws in the first quarter was Naylor’s only points until Ebby Moman got a putback with 3 1/2 minutes left in the second quarter. The Mules meanwhile jumped out to a 23-2 lead and went on to win 63-30 Monday night at the Senior High Gym.

Kiley Bess, who scored her 1,900th career point in a loss Saturday, finished with 23 points.

“We shot it really well tonight,” Coach Pattillo said. “We’re so capable of shooting it this well, and when we start shooting it well, how everything is going to get easier. You don’t have to be great defensively if you hit shots.”

Bess had three points early as the Mules scored the first seven, but went to the bench for a few minutes after picking up a charging foul. Bess re-entered late in the first quarter and added a free throw and a layup off a steal, putting the Mules ahead by 10 after the first quarter.

Katie Pattillo, who finished with 17 points, opened the second with a 3 and the Mules soon added another 3-pointer that put Poplar Bluff ahead by 21.

“I think we came out here, looked at their size and let it get in our head. We didn’t come and play with the effort that we should have. We didn’t stick to our gameplan and 33 points is the result,” Naylor coach Gene Deckard said.

Once Naylor (10-7) got that first field goal, the Eagles’ offense got going and kept pace with the Mules in the final few minutes of the half, with both teams adding seven points in the closing 3 minutes.

McKenzie Crofford converted the rare four-point play at the beginning of the third quarter after she swished a corner 3 and had her hand slapped on the followthrough.

Naylor cut the lead to 16 points but then Bess, Pattillo and Bass each swished a 3 and Naylor called a timeout.

Poplar Bluff outscored Naylor 14-4 in the final 4 1/2 minutes of the third quarter to go ahead by 26 points. Pattillo made a pair of 3s during that stretch and Emma Johnson capped the quarter with a buzzer-beating jumper from the lane that bounced on the rim a couple of times before falling in. The Mules would lead by as much as 36 in the closing minutes of the game.

On Saturday, the Mules lost 81-31 to Ensworth in Nashville, Tennessee.

“We kind of knew what to expect (Saturday). That was just a different level,” Coach Pattillo said. “They were just really loaded.”

Ensworth outscored the Mules 29-5 in the opening quarter in beating Poplar Bluff in Nashville, Tennessee.

Bess scored 16 points to reach the milestone in her 80th career game.

Ensworth (15-0) is the top-ranked team in the state AP poll for private schools after winning the Division II Class AA state championship last year. Three starters return from a team that finished 29-2.

“It was a nice trip for us. We ended up taking the girls to Belmont University’s game. It was a good weekend for us. It was a good chance to talk about things, and we spent time together,” Coach Pattillo said. “Our girls responded (Monday). They came out and played hard, played aggressive defensively, and we relaxed and made shots.”