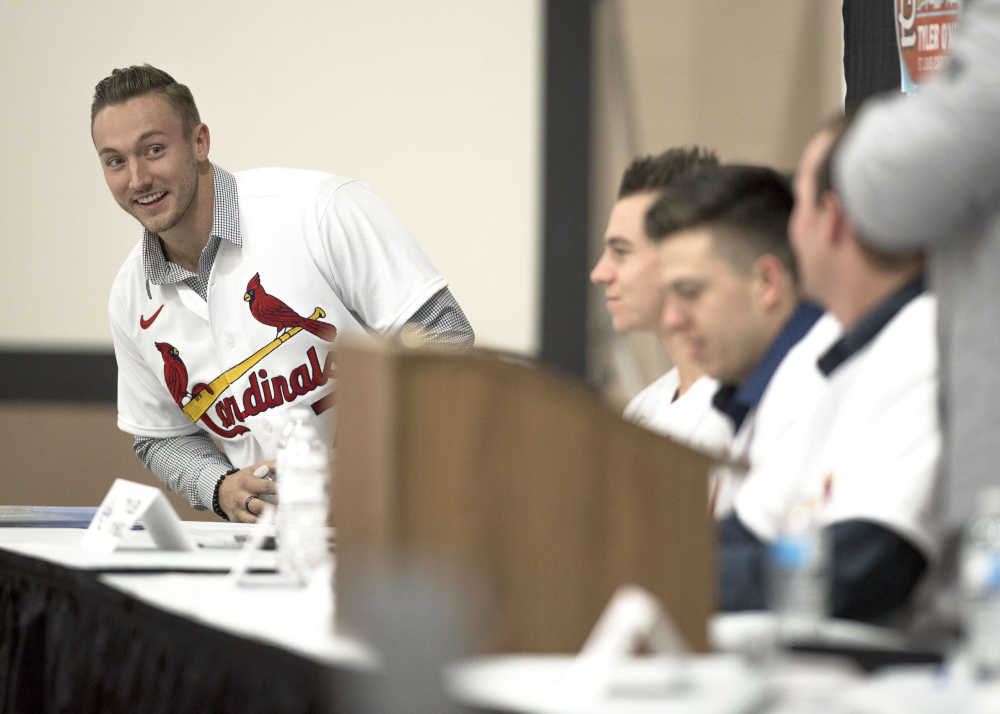 St. Louis Cardinals catcher Andrew Knizner peeks around the corner after his name is announced at the Cardinals Caravan on Monday, Jan. 20, 2020, at the Osage Centre in Cape Girardeau.
Ben Matthews ~ Southeast Missourian
Order this photo

It took an hour for Reiley Calvert’s family to drive from Risco, Mo. to Monday’s Cardinal Caravan.

“I’m here to see the players and get my baseball signed,” said Reiley, 12.

“I think (the Redbirds) are going to make it to the World Series,” young Reiley added.

The annual event, sponsored by Cape Girardeau’s Park and Recreation department, drew 520 people to Osage Center – requiring staff to set out three additional racks of chairs at the last minute.

“This is the most people I’ve seen in the last five or six years of coming to this event,” said Lana Kneezoe, 36, of Cape Girardeau.

O'Neill looks to be in the starting nine

The crowd seemed most interested in the Cardinals’ Tyler O’Neill.

O’Neill believes he has an excellent chance of being in the opening day lineup in left field.

John Mozeliak, president of baseball operations for the Cardinals, told the St. Louis Post Dispatch, “The (current) idea is allow a Lane Thomas or Tyler O’Neill to play.”

For O’Neill, a Canadian who played in the Pan Am Games for his home country in 2015, Mozeliak’s words were music to his ears.

“It’s good to hear ‘Mo’ showing his confidence in me,” said O’Neill. “I just want to prove him right.”

O’Neill is a weightlifter, as is his father.

“I have lifted four plates (approximately 400 pounds),” said the 5-foot-11, 210-pound native of British Columbia, “but my goal is to stay on the field so I’m tweaking my (workout) regimen and my diet too.”

Fan Steven Cobb of Jackson, 70, thinks an outfield change might work out fine for St. Louis.

“(Losing Ozuna) is substantial,” Cobb said, “but O’Neill or Thomas can probably pick up a lot of the slack.”

Seth Elledge is a bullpen specialist who hails from Texas.

The 6-foot-3, 240-pound righthander, with a career earned run average of 3.29, does not have much hope of making the big club this year.

Elledge sees himself as a strikeout specialist, posting more than three K’s for every walk allowed in his three-year career in the minors.

Andrew Knizner’s path to the big leagues as Yadier Molina’s catching backup may be blocked now with the recent signing of 33-year old Matt Wieters to a one-year contract.

Knizner, 24, who has hit .303 overall in four minor league seasons since St. Louis drafted him in 2016, may be trade bait for management.

“I don’t focus on what I can’t control,” said Knizner, who before the minors played for North Carolina State for three years.

“Who the Cardinals sign is not my decision,” added Knizner. “My job is to get to spring training and compete for a job.”

The oldest of the prospects claimed not to watch much baseball growing up.

“I was outside a lot,” said Ryan Helsley, 25, an Oklahoma righthanded pitcher who has dealt with shoulder fatigue and right shoulder impingment the last two seasons.

Helsley was called up by St. Louis last August and pitched effectively out of the bullpen – posting a 2-0 record, a 2.95 ERA, and striking out 32 in nearly 37 innings of work.

Helsley, who is of Native American heritage, has been critical in the past of the Atlanta Braves’ continued use of the tomahawk chop.

“I think enough has been reported about (my criticism),” said Helsley, who has a heritage in the Cherokee Nation.

“My grandparents are full-bloods,” said Helsley, “and I’ve given them a hard time for not teaching me more of the Cherokee language as a kid.”

Ex-Cardinal Rick Ankiel spent 11 years in the big leagues, most of them with St. Louis – first as a pitcher, then as a center fielder.

Ankiel, 40, got the Osage Center crowd laughing when asked if he felt more confident on the mound or as a position player.

“I felt in complete control as pitcher,” said Ankiel, “and I never felt (the same) in the outfield.”

“But,” added Ankiel, a published author who retired in 2014 and briefly attempted a comeback in 2019, “chicks dig the long ball.”

Spring training opens for the Redbirds Feb. 11 in Jupiter, Florida, with pitchers and catchers due to report.