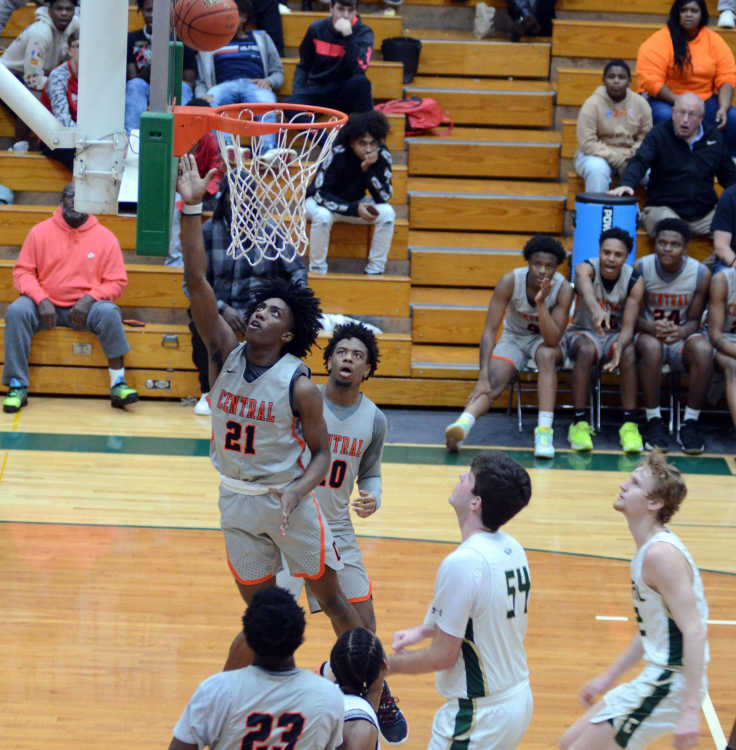 A rough start in both games left the Eagles in a big hole at halftime, but against Cape Central Friday night, a resurgent NMCC squad battled back within a possession entering the fourth quarter.

Timely 3-point shooting in the fourth proved to be a big factor in helping the Tigers prevent the upset, holding on for a 61-50 final to spoil the Eagles’ homecoming.

“We came out and competed,” NMCC assistant coach Dontre Jenkins said. “We dug ourselves in a little hole and spent a lot of energy trying to fight out of it. In the third quarter, we got back within two, and Cape did a good job answering the challenge.

“They had some guys step up and make some big shots in key points in the game and get that lead back up. We weren’t able to answer it.”

Jenkins took over head-coaching duties for Friday night’s contest after Lennies McFerren picked up a pair of technicals in Tuesday’s 66-48 to Charleston.

The technicals sent McFerren to the locker room early and required he sit out the team’s next contest.

Thanks in part to nine first-half turnovers, the Eagles (9-7) entered halftime with a double-digit deficit, 32-22, that only grew to start the third quarter.

NMCC flipped the script soon after, fighting back to within two points to enter the fourth quarter despite two of their starters, Ke’von Williams and Christian Phillips, already playing with three and four fouls, respectively.

Forcing five Tiger turnovers in the quarter, NMCC closed out the frame on a 16-5 run that included seven straight points midway through the rally, off back-to-back Cape Central turnovers.

A Darion Triplett bucket in the closing second had the Tigers ahead by two possessions, 44-40, before Shamar Williamson laid in a basket at the buzzer for NMCC to close his team back within two, 44-42, heading into the fourth. 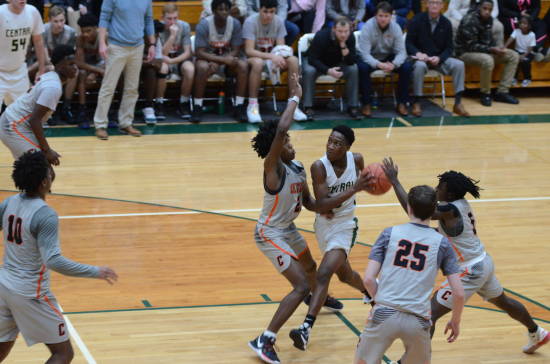 “We changed the defense up a little bit,” Jenkins said. “We really closed out on their guys on threes and make everything tough. We did a great job in that quarter of only giving them one opportunity.”

It didn’t take Cape Central long in the fourth to regain momentum with Triplett hitting 3-pointers on consecutive possessions to open the final frame, pushing his team’s lead back out to eight.

An NMCC turnover led to Doreante’ Tucker layup that again had the Tigers up by double-digits, 52-42, with 6:34 remaining.

“They went on a run and made some shots,” Tiger’s head coach Drew Church said of NMCC’s third-quarter run. “They made two or three threes in a row, and we had a couple turnovers. I was proud of our guys for turning the screws and getting that lead back.”

A bucket from Donnie Brown broke up Cape Central’s 8-0 run to start the quarter, but with a healthy lead, the Tigers were able to spend the final five minutes of the contest working the clock.

When pressed to shoot Cape Central had their most efficient quarter of the night, hitting their first five shots of the fourth and going 6 of 7 from the field in the frame.

On the flip side, the Eagles had their coldest frame of the night.

With time and the game quickly slipping away, NMCC shot 3 of 11 from the field in the final eight minutes of the game, watching several well-contested attempts in the final minutes come up short.

The closest the Eagles were able to come to the Tigers in the final four minutes was nine points as Cape Central avoided the upset.

“We just wanted to be patient.,” Church said of slowing things down in the fourth. “The way they were playing, they were sagging way off on three of our guys. We wanted them to come out and guard us so we could run our normal stuff.

“We made some mistakes with some silly turnovers, but overall if we fight, we’ll continue to get better, and we fought tonight.”

Tyrus Reddin led the Tigers’ effort with a game-high 18 points that included a pair of 3-pointers and an 8 for 11 night at the free-throw line.

Tucker and Triplett scored 14 and 11 points respectively, including a pair of 3-pointers from Triplett as the team connected on six on the night.

The win breaks a two-game losing streak for the Tigers after starting the year 10-1.

“I was proud of our guys for turning the screws and getting that lead back,” Church said. “I was happy with our guys and how they reacted when they started playing some junk defenses. Some triangle-and-twos and box -and-ones. We really had some guys step up, slow down and make some shots, especially in the second half.”

For NMCC, Brown’s 17 points were a team-high, hitting all three of the team’s 3-pointers. Williams finished with eight points while Williamson and Phillips added seven points each to the cause.

Free throw troubles haunted the Eagles all night, finishing 6 for 16 from the foul line on the night and 3 for 8 in the second half alone.

On adjusting to Cape Central’s slower style in the fourth quarter, Jenkins said, “It affects what we can do a lot.

“We had to come out of the defense we were having success with to try and overplay to go for the steal and get some points. Cape did a great job stalling the ball toward the end of the game.”