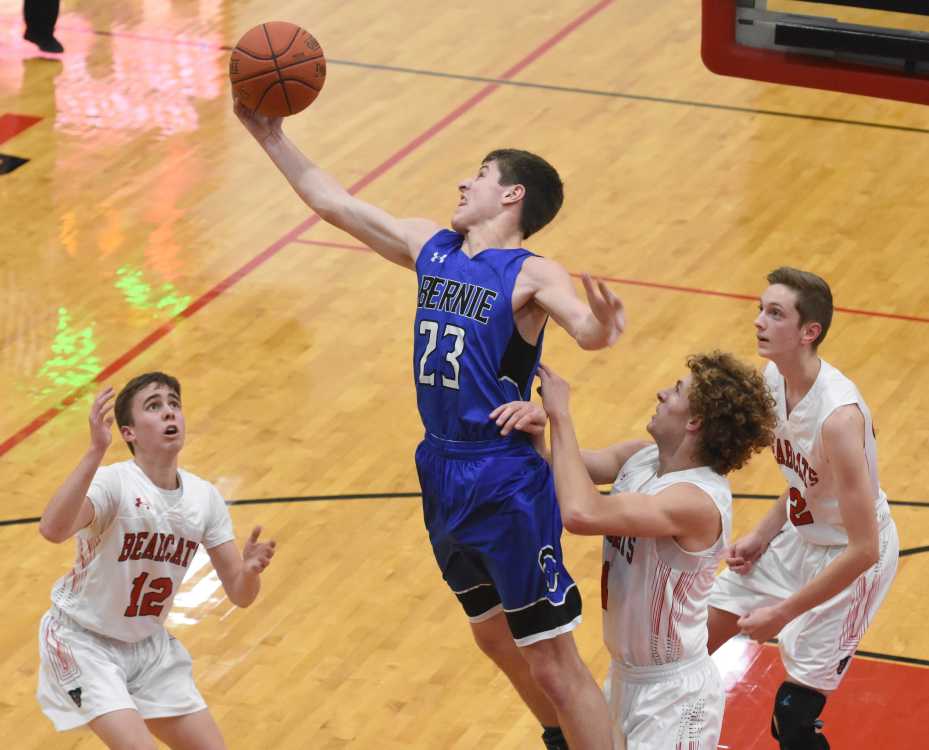 DEXTER — The Bernie Mules were knocking down 3-pointers right and left in the first half.

After halftime when their shots didn’t fall as often, the Mules rebounded many of their misses en route to a 60-55 victory over the Dexter boys basketball team.

The Mules (12-3, 4-0 SCAA) moved into sole possession of first place in the conference standings with Friday night’s well-rounded win at the Bearcat Event Center.

“I’m obviously proud of our kids,” Bernie coach Jason Long said. “For a lot of the night, we did a lot of really good things. … Our kids really, really fought. … I think they just wanted to get out there and compete more than anything. They wanted to compete and show they belong.”

The Mules, who will likely be the top seed for the upcoming SCAA tournament that starts Jan. 27 at the BEC, avenged a loss to the Bearcats in the semifinals of the Bloomfield Christmas Tournament. The Bearcats won that matchup 58-56, and they beat Kennett 60-37 two days later to win their 12th BCT championship. Bernie defeated Hayti 74-55 to win third place.

“I don’t know what the shooting percentage was early in the game, but it didn’t seem like they were missing any shots at all,” Dexter coach Chad Allen said. “That probably fueled them even more defensively.”

Despite trailing by as many as 19 points in the second quarter, the Bearcats didn’t go down without a fight in the fourth. Bernie helped their cause by committing five turnovers and missing 6 of 13 free throws, including the front end of three one-and-one chances.

The Bearcats whittled their lead down to five points in the final minute.

“I thought the second half, we finally got out and guarded a lot better,” Allen said. “I believe we outscored them by five (30-25) in the second half after we started playing a little more aggressive (and) got after them a little bit more defensively. It was just too late.”

The Mules came out firing from beyond the arc, making four 3-pointers to take a 15-3 first quarter lead. Harty made two 3s and Zoll and Vaughn made one apiece. Vaughn added an old-fashioned 3-point play to give Bernie a 12-point lead.

Henson was responsible for Dexter’s first three points — a fast-break layup on a pass from Boles and a free throw — to cut the Mules’ lead to 6-3.

The Bearcats fought back with a 6-0 run to cut Bernie’s lead to 15-9. Cole Nichols scored on a driving layup, and Henson made back-to-back baskets inside.

Tyler Suiter scored on a layup on a fast break and sank a jumper near the free throw line, giving the Mules a 19-9 lead entering the second quarter.

Harty made consecutive 3-pointers and Suiter scored inside to extend the Mules’ lead to 27-9 at the start of the second quarter.

After Ellinghouse scored in the paint with 6 minutes left, Harty sank another 3-pointer to give the Mules a 30-11 advantage, their largest lead of the game.

“You’ve got to give Bernie credit. They came ready to play,” Allen said. “They showed it tonight. They wanted this game bad. Defensively, they really got after it. We were missing shots early and dug (ourselves) a 19-point hole. That was the biggest difference in the game. They set the tone early.”

After Andrew Geohagan scored inside to end the run, Henson produced four straight points and Bernie’s lead was reduced to 32-25 with 1:54 remaining before halftime.

Vaughn hit a 3-pointer, stretching the Mules’ lead to 35-25 at the intermission.

Like they did in the first two quarters, the Mules started strong in the third. Geohagan scored in the paint, Zoll made two free throws and Harty made a 3-pointer to give them a 42-25 advantage.

Dexter came within 14 points (44-30) on a 3-pointer by Henson, but Harty made a 3 and Vaughn produced an old-fashioned 3-point play to hand the Mules a 50-32 lead going to the fourth quarter.

The Mules were coming off a 60-41 home loss to Kennett on Tuesday night.

“We had a bit of a rough outing Tuesday night,” Long said. “Man, we sure had a good practice Wednesday and Thursday. All the credit goes to the kids. They did a good job of trying to prepare themselves to improve on their weaknesses and then come out and compete tonight.”