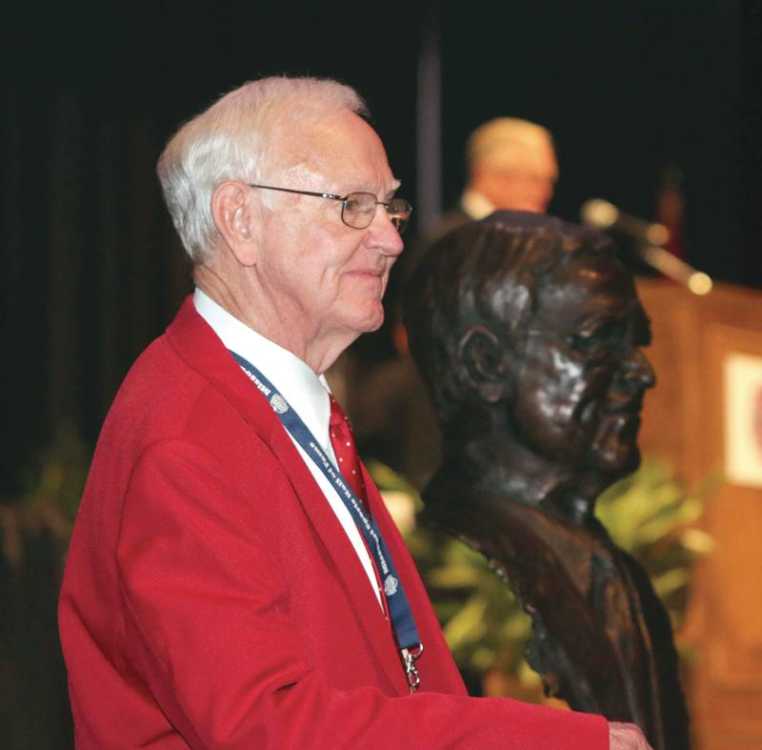 In this November 2016 file photo, Three Rivers College men's basketball coach Gene Bess stands next to his bronze bust as part of the longtime coaches induction into the Missouri Sports Hall of Fame as a Missouri Sports Legend at the Show Me Center in Cape Girardeau, Mo.
STANDARD DEMOCRAT/Chris Pobst

Of all the potential candidates for the inaugural Three Rivers College Hall of Fame class, five stood above the rest.

“Three Rivers College has a long and storied history of excellence in intercollegiate athletics,” said Dr. Wesley Payne, President of Three Rivers College. “The athletic programs provide opportunities for our student-athletes and fans of all ages to share and support a common goal. We are proud to honor these individuals and their achievements as Raiders and in their lives.”

There will be a banquet in their honor at 6 p.m., Jan. 31 at the Holiday Inn, and they will be honored between men’s and women’s basketball games the following night at the Libla Family Sports Complex, which is also the night of the Alumni Reunion.

Tickets to the banquet are $50 per person, tables of 10 can be reserved for $600 and a reserved named table is $1,000. The last day to purchase tickets is Jan. 24 and tickets are available at the Three Rivers Student Accounts Office or by contacting Janine Heath at 573-840-9698.

For those inductees who have passed away, the ring will be presented to their family.

The process to get here took years.

Three Rivers hosted its first Alumni Reunion in 2015, the same season Bess won his 1,200th game. New this year will be the Hall of Fame, as well as the first-ever Three Rivers Alumni Star Award, which is being presented to Christy Frazier-Moore, who graduated from Three Rivers in 1998 and is currently the vice president/mortgage sales manager at The Bank of Missouri.

A drop-in reception in her honor will be from 2-4 p.m., Feb. 1 at the Tinnin Fine Arts Center.

As Three Rivers finished the new Libla Family Sports Complex about a year ago, the booster club felt it was time to get started on a hall of fame. A committee consisting of Three Rivers coaches, several booster club members and board of trustees members Eric Shalke and Tim Hager met to get the ball rolling.

First, they had to decide the criteria and how the inductees should be honored in the gym itself. Should program contributors be eligible or just players and coaches?

“I would look around (the gyms) and look at their hall of fame and I got some ideas,” Hager said. “The one criteria we came up with is somebody has to be out of Three Rivers for at least five years.”

In a meeting during the summer, the exact class was chosen.

Bess and the ’79 Raiders were easy choices. But who and how many people would join them took some time.

“There are a lot more people who will get in in the years to come,” Hager said. “They’ll be players from all teams eventually.”

There will be a plaque near the entrance of the Libla Family Sports Complex to honor the inductees, as well as each member getting a ring, which will be paid for by the booster club.

“The booster club is a positive, real driving force on this hall of fame,” said Hager, who went to his first Raider game when he was in junior high and graduated from Three Rivers in 1985. “The neat part for me is going to be seeing them on the court at the ballgame on Feb. 1 … Seeing those folks between games, out on the floor to be recognized the floor is going to be a neat moment.”

Bess, the winningest college basketball coach of all time with 1,293 wins during his 50-year career at Three Rivers, led that 1979 championship team as well as the 1992 National Champion Raiders.

He’s also taken a team to the national tournament 17 times and reached the final four nine times. The NJCAA named him Coach of the Year twice, Regional Coach of the Year 23 times and Conference Coach of the year 19 times. Most recently, the Missouri Sports Hall of Fame awarded him legend status in 2016, where Bess was honored with a bust in his likeness.

J.P. McLane has been a member of the Three Rivers Booster Club for more than 40 years, a consistent presence at Raider games during that time, and has offered both time and money to the college, as well as a large donation to the Tinnin Fine Arts Center.

Paula Corder King, currently the Ellington girls basketball coach and Southern Reynolds R-2 Superintendent, played for the women’s basketball team from 1996-98. She was a two-time NJCAA All-American and is the program’s all-time leading scorer with 1,314 points.

She also is first in career 3-pointers (175), free-throw percentage (90.0) and free throws made (359). Corder King, who learned about being inducted from Hager, her former colleague and current Voice of the Raiders, also holds single-season records in points scored (732), free throws made (215), and scoring average (24.4).

“I’m excited for her to be the first one,” Hager said.

After Three Rivers, she went on to play at Southeast Missouri State.

Matt Palmer, who grew up in Caruthersville, Mo., won Region XVI Player of the Year in 2000 and was drafted by the Colorado Rockies in 2001 and then by the San Francisco Giants in 2002. He played 13 years including five years in the majors and in 2009 went 11-2 with a 3.93 ERA with the Los Angeles Angels.

“He’s by far got the longest professional career out of any baseball player who played here,” Three Rivers coach Stacey Burkey said.

He finished with a career record of 13-7 and had 98 strikeouts over 185.1 innings with the Giants, Angels and Padres.

“It was fun staying up late at night and listening to the games on the west coast,” Burkey said. “Following him through his professional career was a lot of fun … Through all that he was the same kind of person he was here. Very humble, just a great teammate.”

At Three Rivers, Palmer struck out 17 in a game in 2000, which is tied with Randy Smith for the most in a single game. He is second in strikeouts in a season (99).

“He was a guy who was able to start and relieve and was ready to take the ball anytime I needed him to. Just a relentless worker,” said Burkey, who got to tell Palmer he was being inducted. “We hadn’t talked in a while. We texted back and forth the past six months. But that was a surprise he sure wasn’t expecting.”