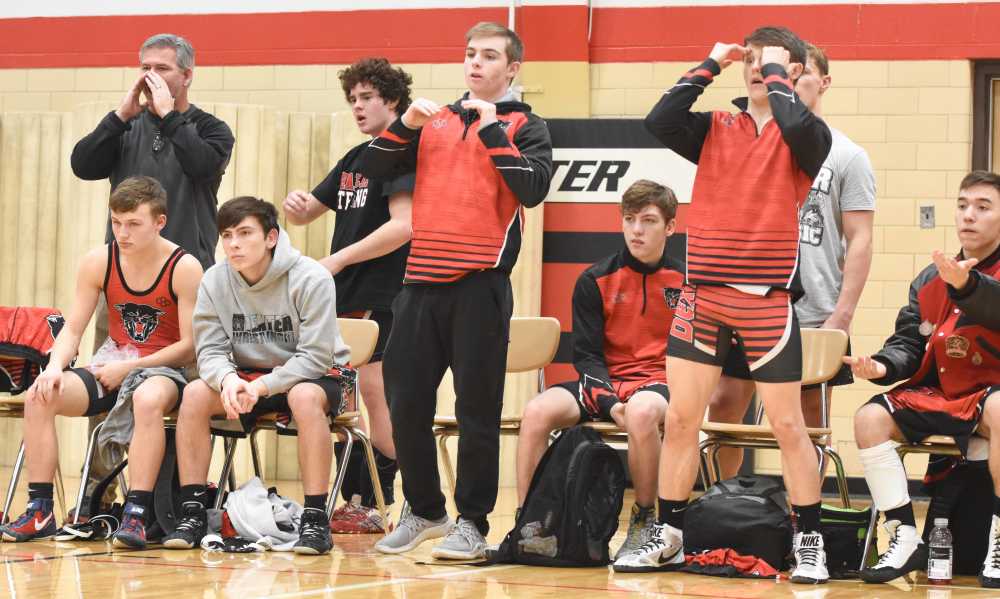 Shawn Robards won a hard-fought match that went the distance to the delight of his coaches and teammates, and the Dexter wrestling team beat Kennett 63-18 Thursday at Dexter High School.

Robards beat Preston Ragland 9-8 in the 195-pound bout behind a strong finish to the third period with his teammates and coaches cheering him on.

The Bearcats improved to 11-3 in dual matches, and Travis Waldner won his 24th straight match to start the season.

Jack Below scored 12 of his 36 points in the fourth quarter, as the Advance boys basketball team survived a scare from the Richland Rebels in a 63-61 victory on Thursday at Essex.

Damon Ivy paced Richland with 15 points, Tanner Freeman had 11 and Shai Sheffield had 10.

The Neelyville boys basketball team took charge after halftime en route to a 64-37 victory over the Puxico Indians on Thursday night at Neelyville High School.

The Scott County Central girls basketball team outscored Advance 27-13 in the second half to beat the Hornets 46-35 Thursday night at Advance High School.

Alandry Below scored a game-high 29 points for the Hornets, who fell to 8-6.

The Clearwater girls basketball teamĺs Tiffany Williams made three 3-pointers in the second quarter, and the Tigers beat Bloomfield 41-30 Thursday night at Bloomfield.

The Tigers outscored Bloomfield 17-11 in the second quarter to take a 21-15 halftime lead. The score was tied at 4 after one quarter.

Each team scored six points in the third, but Clearwater (2-10) clinched the win the fourth, outscoring the Wildcats 14-9 and making 5 of 9 free throws.

Williams finished with a game-high 14 points.

The Naylor Eagles sprinted out to a 24-1 lead after one quarter and rolled to a 68-9 victory Thursday at Puxico.

ôNaylor is a great team and has been well-coached by Gene (Deckard) and Logan (Foster) for years,ö Puxico coach Jim Carrier said. ôWe knew what we were facing tonight. Despite that, the girls never gave in or tapped out. They knew this was a game that would make them better players. They tied their shoes a little tighter, took their licks and kept on playing. Iĺm proud of them for that.ö