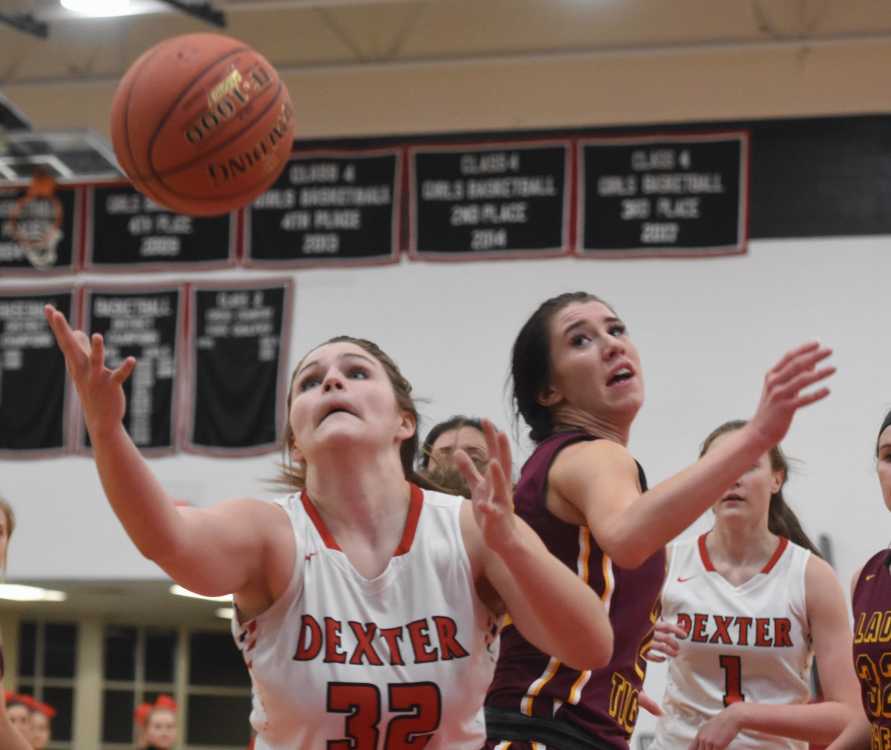 Dexter's Mikayla Dodson (32) reaches for a rebound in front of Neelyville's Lexi Liau during the first quarter Thursday, Jan. 16, 2020, at the Bearcat Event Center in Dexter.
DEXTER STATESMAN/Kyle Smith

The Tigers strung together a pair of 13-0 runs. The first started in the opening quarter and ended in the second, and the second rally began in the second and continued into the third.

Neelyville coach Becky Hale said teamwork was the key to those scoring outbursts.

“Playing together. That’s the main thing,” Hale said. “Communicating and talking. Having runs like that, it’s always a team effort. When you’re able to do that, that’s nice.”

Neelyville scored 24 of its 35 first-half points in the paint with Makenzie Davis scoring 14 of them, many on second-chance opportunities.

“When we got the shots, we were moving the ball, working the ball,” Hale said. “That way (we) can get something open. I think we rebounded pretty (well). Let up there at the end. We’ve got to be able to finish out a game.”

Davis finished with a game-high 26 points, Bailey McGruder added 14 and Lexi Liau had 13 for the Tigers, who improved to 11-3.

“Neelyville’s a good team. We didn’t get rebounds and outlets and steals to get the transition buckets tonight,” Dexter coach Eric Sitze said. “They do a good job of getting a good shot off and taking care of the basketball.”

Neelyville used a rebounding advantage and took advantage of seven Dexter turnovers to hold a 20-11 shooting edge in the second quarter.

“That’s Neelyville’s thing,” Sitze said. “They’re really aggressive. They go after the ball well. They go get it with two hands. They know how to go get the basketball.”

The Tigers shot out to a 7-0 lead in the first quarter. Davis and McGruder scored a pair of baskets inside on assists and Liau sank a 3-pointer.

Dexter fought back to cut its deficit to three points three times. Werneck’s steal and layup cut Neelyville’s lead to 7-4, Sydney Asberry’s fast-break layup sliced it to 9-6 and Werneck’s baseline jumper trimmed it to 11-8.

Liau began the first 13-0 run with a free throw, Davis scored on a second-chance opportunity and Liau scored on a fast-break layup after a Dexter turnover to give Neelyville a 16-8 lead after one quarter.

The Tigers opened the second quarter with eight straight points, including six by Davis.

“She’s got pretty good moves down low,” Hale said of Davis. “We’ve been working on rotating the ball and getting some movement. That way we can get something underneath the basket, especially when our shots aren’t falling outside.”

The Tigers went 1 for 10 from behind the arc in first half and made only one 3-pointer overall.

Werneck’s 3-pointer near the 5-minute mark and Caitlin Giles’ putback stopped the run. However, the Tigers closed the half with nine straight points to take a 35-13 halftime lead.

Neelyville scored the first four points of the second half to extend its run to 13 and took a 45-23 lead into the fourth quarter.

The Bearcats outscored Neelyville 27-25 in the second half.

While showing improvement, the Bearcats continue to struggle with consistency.

“They’re looking for the right things in the press offense now, but sometimes they get in a hurry and make mistakes,” Sitze said. “They’ll do it right one or two trips. They’ll turn it over the next trip. … The consistency part is what we’ve got to get better at.”