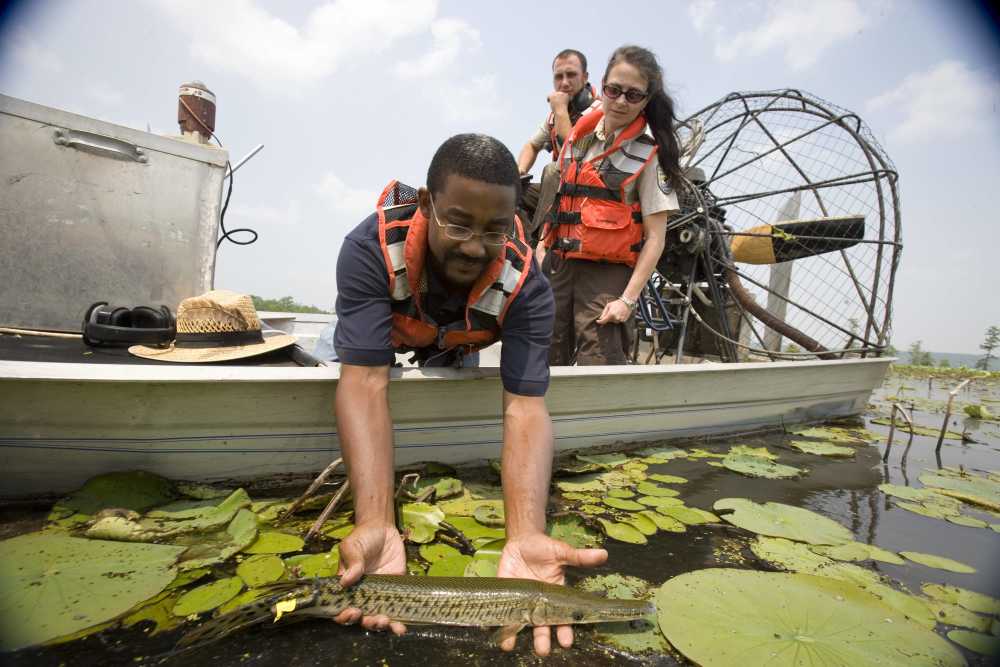 Today: Christopher J. Kennedy, 47, fisheries regional supervisor, Missouri Department of Conservation (MDC), based in Cape Girardeau. Kennedy is the MDC’s go-to person for fishing in this region and serves on a statewide committee studying a possible restructure of MDC as the culture — and its collective attitude toward the outdoors — evolves.

Are people still fishing in Missouri?

Actually, in the last two or three years, the number of people who have purchased licenses intending to go on as many as two fishing trips per year, has increased. Of all the traditional, underline, traditional outdoor sports, fishing remains on the upswing in the state. By contrast, there’s little doubt there are fewer people hunting today than 20 years ago. People do remain interested in the outdoors. For one thing, there is more bird-watching, more wildlife watching, now.

How does the state encourage fishing?

The MDC has worked hard through the Urban Fishing Program to create places to go fishing in populated areas. In Cape, if a boy or a girl would happen to ride a bicycle to the Nature Center in Cape County Park North, we’ll let you use a pole and gear and we’ll give you live bait. There’s a small pond in front of the Center that’s dedicated for the use of kids.

Hunting is declining but angling is not. How would you explain this?

The culture is changing. The way some Americans think about firearms, the way they think about guns, has had an impact on the number of hunters. Fishing is more readily accessible.

How is fishing more accessible?

It takes time to learn how to handle, discharge and care for a firearm. It takes education and training and required hunter safety courses. Hunting takes more gear too. There is the question of where can a person hunt. Fishing is less time consuming. A mom or a grandma can take a young person — even on the spur of the moment — to a pond, a stream, a creek or a lake. As long as you’ve got a pole and bait — and a license, of course — you can take part in the sport. Your license fee, by the way, assures that conservation efforts can continue in Missouri.

You sound as if you speak from experience.

My grandmother was the very first person who took me fishing as I recall. We went bluegill fishing using cane poles. We used night crawlers and crickets. At a young age, I fell in love with the water. I enjoyed contemplating about what lies beneath the surface.

Personally your love for the water has to do with more than fishing.

My dad, Arthur Kennedy, used to race boats professionally. He had a regular job but he went on weekends and during vacations. It was such fun. As a boy, I would daydream about those boats. Dad used to compete all over the U.S. I’d seen most of our country by the time I was 14. I cleaned boats, kept them spick and span. As I got older, I became a functional member of his crew. The fondest memories of my life were with Dad.

I’m from north St. Louis. In 8th grade, my teacher took the best students and entered them in an Optimist Club oratory contest. Well, I wasn’t one of the best students but I really wanted to participate. The teacher said I didn’t have the grades but if I got them up, if I did my work, she’d let me enter the speaking competition. I got my grades where they needed to be and got to take part. I took second place, by the way. I’ve got to give credit to my dad too. Because of the traveling I did with him at a young age, I got to meet others and started to appreciate people and cultural diversity. My speaking skills improved just by being around folks. Later I went to a Catholic high school, Cardinal Ritter College Preparatory.

How does a person get to do your job?

I thought about electrical engineering but got hooked on fisheries work. While attending the University of Arkansas-Pine Bluff (B.S., 1996), I started working for the U.S. Fish and Wildlife Service. We did work in southern Arkansas, the swamps of Louisiana, even some time on an Indian reservation in Kansas. I realized I had an affinity for the outdoors and as I said, I loved the water.

I’m assuming Fish and Wildlife hired you after graduation.

Actually, no. As I was obtaining my degree in June ‘96, it was during the Clinton administration and you may recall the federal government was then in a shutdown. Nobody was getting hired and jobs went unfilled. A family member had a connection at the state Conservation Department, my current employer, and opened the door for me. Early on, I worked with landowners on private lakes and ponds, on stream management on private poverty. I was able to hone my speaking and writing skills as I got to tell MDC’s story to youth and community groups as well as to service clubs. I’m still doing this.

What is your department’s mission?

Our role is pretty straightforward — we manage fish, the forest and wildlife. As far as fish are concerned, among other tasks, we monitor and stock fish. For example, the Black River and the St. Francois River get stocked with walleye and paddle fish. Urban lakes get trout — e.g., Rotary Lake in Jackson and Legion Lake in Perryville.

The photo for this story shows you handling an unusual fish.

It’s called the alligator gar. As recently as 2000, we did not have gar in Missouri. There’s been a disdain for the fish. It has teeth. Some scientists used to give the gar bad press with no regard for the positive role it had in the ecosystem. For whatever the motivation, people would go on a killing spree because the fish’s appearance does look threatening. Today the gar is about to become a protected species. Animal Planet and National Geographic have done stories on the gar.

You remember this fish from your childhood.

When I was eight, my dad caught a long-nosed gar and just threw it up on the bank. You see, my Dad had bought into the negative narrative. Let me tell you, the gar lives a very long time and can get really big. An alligator gar can live from 50-100 years and can grow to 300 pounds. Oh, by the way, the meat from a gar is very delectable.

I’m sure you have an opinion about climate change.

(Long pause) There is enough data to show that in the next 50 years, we’ll have extensive droughts as well as flooding. In our department, we have to figure out how we can help to lessen the impact of these extreme conditions. The MDC needs to work with society on how individually we can impact climate.

Say a word about this steering committee on which you sit, the one looking at the future.

It was a 16-member panel at first but has gotten considerably larger. Here’s a word I like to use in describing the visioning we’re doing — relevance. How do we remain relevant as a conservation department as society changes, as how people access the outdoors changes? Also, the committee is looking into how to keep people invigorated, excited, about conservation.