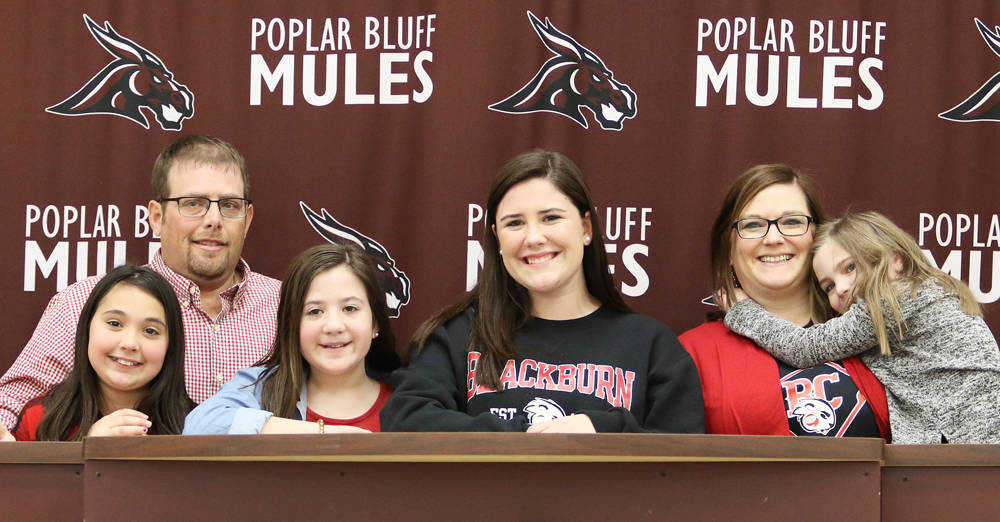 McKenzie Smith, center, is joined by her family during a signing ceremony recently at Poplar Bluff High School
DAR/Brian Rosener
Order this photo

McKenzie Smith started her senior year at a new school and with new teammates playing softball.

After recently signing her National Letter of Intent to play softball in college, the Poplar Bluff senior is looking forward to another new adventure.

“I hardly knew anybody here.”

Smith will again start a new school while joining a new softball team next fall after signing with Blackburn College, located in Carlinville, Illinois.

“I went to the school (on a visit) and it was just immediate, that’s where I wanted to go. I knew,” Smith said.

The smaller Division III school reminded Smith of Puxico. She went to visit in November after her traveling softball coach heard that his friend, Blackburn coach Kerry Crum, was looking for a catcher.

Smith has always been a catcher, just like her father and grandfather.

“I think it just kind of ran in the family and I always had an arm and I don’t like to run,” Smith said.

Crum is entering his fifth season leading the program.

Blackburn is part of the St. Louis Intercollegiate Athletic Conference. The Beavers were 12-20 last spring and eighth in the 10-team league.

“I want to help people,” she said. “I want to learn why people do what they do so I can help them have better outlooks on themselves so they can go and do big things.”

During her senior year at Poplar Bluff, Smith hit .286 with a slugging percentage of .494. She ranked third on the team with 22 hits, including four home runs and four doubles while driving in 17.

Behind the plate, she threw out 11 runners and picked off three more, catching all but five-plus innings the entire season.

“She’s a great kid,” Poplar Bluff softball coach Lisa Boyer said. “She has potential to hit for power and a great attitude.”

Boyer said Smith is always trying to lift everyone else up.

“Her coming into a new school, a lot of kids would lay low,” Boyer said. “She came in and she fit in really well. Everybody really liked her. She came in and was a leader.”

Smith credits her teammates for helping ease the transition to a new school.

“Because softball season is in the fall, I had all those girls I met before school started and they kind of showed me (around),” Smith said. “So it was a lot easier than I think it would have been if I hadn’t had softball.”

Smith has played travel softball since the age of 11 and credits the coaches at the Strike Zone Sports Training Facility, saying they are, “the reason that I’m where I’m at.”