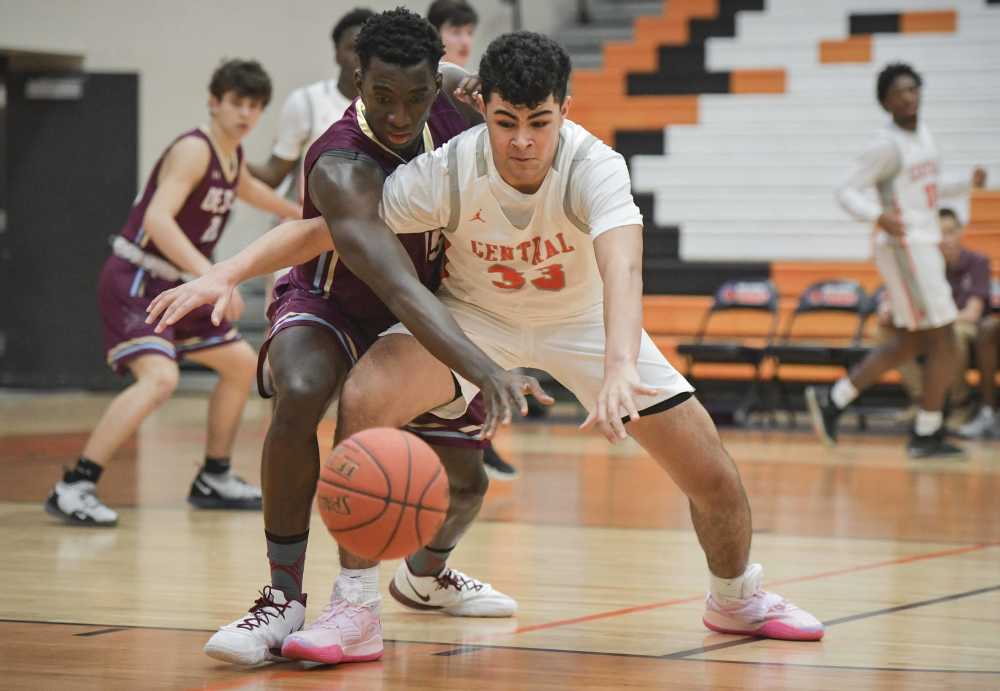 DeSmet broke the hearts of the Cape Central faithful as it withstood a spirited fourth-quarter Tiger comeback Tuesday to win 56-52.

The Tigers (10-3, 1-0, Class 4 District 1) had trailed since the end of the first period but managed to cut the deficit to a single bucket with 19 seconds left in the game.

“When you have a two-point ballgame with under a minute left,” said Central coach Drew Church, “a missed free throw here or there counts.”

“(DeSmet) is about the best there is in the state,” said Church. “(The Spartans) have everything you need (in a winner). Size, strength, shooters, ballhandlers, the works.”

Central led until late in the first quarter but trailed DeSmet after the initial eight minutes, 11-9. The Tigers would not take the lead again.

One difference in the game was the disparity in the 3-point shooting as DeSmet landed seven shots from beyond the arc.

“(Seven 3s) is about normal for us,” said Spartans coach Kent Williams. “We got some good looks.”

“We gave up a few too many uncontested 3s,” admitted Church, in his 14th year of leading the Tigers.

Another key difference was the noticeable disparity in height.

“It’s hard to post up against seven-footers,” said Church, slightly exaggerating their height.

“(Tall players) take away dribble penetration and getting to the rim,” said Church, “so you have to adjust by taking jump shots.”

“(Gassama and Keita) sometimes give us big games,” explained Williams, “and sometimes they play pretty raw.”

Williams, who came to DeSmet in the 2017-18 season after 11 years coaching in college at SIU-Edwardsville, said neither big man has played a lot of basketball in this country.

“What they need,” Williams added, “is more basketball reps as they continue to adjust to America.”

DeSmet’s only senior, Michael Skoff, led all scorers with 14, including two treys.

The only other Spartan in double figures was sophomore Brian Taylor, who added 12 to the winning effort.

Central outscored DeSmet in the final period, 21-13, to make it close.

“This was one of the sloppiest games of our season in terms of decision making,” contended Williams.

“I was disappointed in our 19 turnovers,” the DeSmet skipper continued. “It’s hard to win games giving the ball away that often.”

Williams believes his squad has a target on its back.

“When you have a chance to be one of the best teams in the state,” Williams said, “you know you’re going to get the other team’s best.”

“They gave us a fight,” noting last year’s matchup with Central — at DeSmet — came down the buzzer with the Spartans prevailing 55-54.

“We needed a game like this (tonight) to remind us how tough we have to play,” said Church.

“We’ve got to make easy free throws when they come our way, though.”

Reminded that his Tigers gave a powerhouse Class 5 team all it could handle, a subdued Church was not consoled.

“Yes,” Church agreed, “but hanging with them wasn’t the goal.”