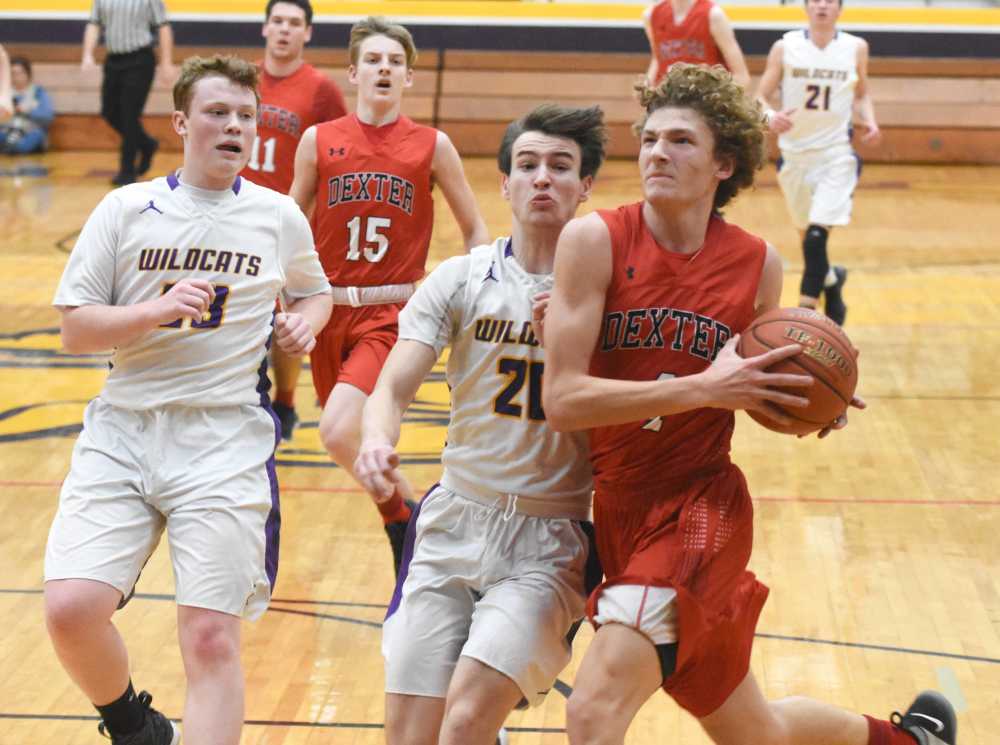 At least three times in the first half, the Bearcats chased after balls going out of bounds and passed to a teammate who started a fast break, resulting in an easy scoring opportunity.

The Bearcats sought to convert turnovers into points and rolled to a 69-32 rout of Bloomfield in an SCAA matchup Tuesday night at Bloomfield High School.

ôWe were definitely pursuing pretty hard at times,ö Dexter coach Chad Allen said. ôOnce we got active, we looked pretty good. Like I told the guys, weĺve got to play hard all the time. Weĺve got to keep working. Hopefully, weĺll keep progressing as the year goes along.ö

The Wildcats committed 18 first-half turnovers, and Dexter turned those into 19 points while building a 46-21 halftime lead.

The Bearcats will host Bernie (11-3, 2-0) in a battle of the only two undefeated teams in conference play on Friday at Dexter. The winner will likely earn the top seed for the upcoming SCAA tournament.

Andrew Ellinghouse scored a game-high 16 points for the Bearcats. He scored 14 of those in the first half. Garrett Henson scored 12 with 10 coming before halftime, and Ryder Boles finished with 11, including three 3-pointers.

If the Bearcats showed any rust from their 15-day layoff since winning the Bloomfield Christmas Tournament on Dec. 30, they shook it off in the first couple of minutes.

Bloomfield held leads of 2-0 on a basket by Jeffrey Jarrell and 4-3 on two free throws by Brandon Wright. Wrightĺs 3-pointer tied the score at 7, but the Bearcats allowed only two more points in the quarter.

Dexter closed the first with a 19-2 run to take a 26-9 lead into the second quarter.

ôTo me coming out, it seemed like we were just flat-footed,ö Allen said. ôWe werenĺt really active. We switched defensively to our full-court matchup. I thought we were a lot more active and that got us going.ö

Henson scored six of those 19 points, Jackson Allen and Sitze made 3-pointers, and six of those points came off Bloomfieldĺs nine first-quarter turnovers.

The Bearcats outshot Bloomfield 18-8 in the first quarter because of the turnovers, and they produced 10 field goals Ś three 3-pointers Ś compared to Bloomfieldĺs three.

After Wright opened the second quarter with a 3-pointer, the Wildcats committed five straight turnovers, and Dexterĺs lead ballooned to 37-12.

The Bearcats took a 46-21 lead into halftime.

ôThatĺs something that weĺve struggled with for most of the season,ö Bloomfield coach Brandon Crook said of the turnovers, ôbut Dexter is good defensively, in my opinion. They made things hard on us and we did not handle the pressure nearly as well as we should have. It shows by the number of turnovers we had and the margin of victory.ö

The Bearcats outscored Bloomfield 17-4 in the third quarter and took a commanding 63-25 lead into the fourth.

The clock ran continuously in the fourth quarter because of the 30-point mercy rule.

ôWeĺve just had some nagging stuff,ö Crook said. ôWe had a couple of guys playing through injury tonight, also. The injury bug has bitten us. Weĺre making the most of it and trying to play through it.ö

Dexter played without Carter Dorton, who twisted his ankle during a recent practice. Coach Allen said that Dorton is day-to-day.