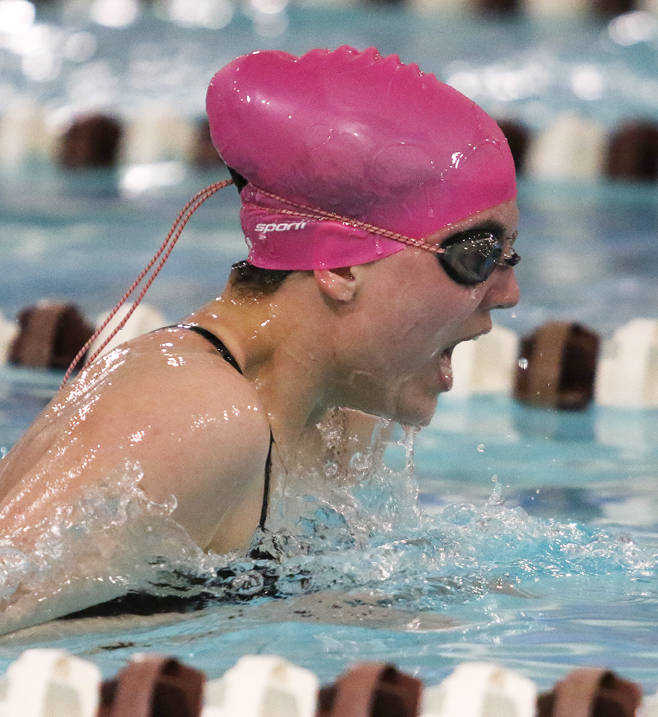 POPLAR BLUFF — Three of Poplar Bluff's swimmers were in the 500-yard freestyle for the first time Tuesday while the Mules that might normally swim the butterfly found they were doing the breaststroke instead.

"We wanted to use this as a meet to get them out of their comfort zone and prove to them that they can swim everything from event one to event 12 because that's how we train," Mules coach Beth Lewis-Muse said. "There's no true speciality for them. Their speciality is every single event."

Paige Bradley, Audrey Cisne and Olivia Kirkman each won individual events while the Mules swept the relays to win a five-team meet at the Black River Coliseum Aquatic Center.

"We just really tried to shake up the lineup because conference is in a couple of weeks," Lewis-Muse said.

Bradley won the 100 freestyle in 1 minute 0.4 seconds and was second in the 200 freestyle after swimming a leg in the previous event, the 200-medley relay, that the Mules won.

Cisne won the backstroke at 1:13.37 and was second in the 200-individual medley with a personal-best time that was 3.16 seconds faster.

Kirkman won the 50 freestyle in 27.59 seconds, finishing 0.75 of a second faster than her previous-best time. The sophomore swam the breaststroke for the first time this year and had the fourth-fastest time, 13.28 seconds quicker than her previous best.

Fortner placed second in the 100 breaststroke as the freshman swam the event for the first time. She also placed third in the 200 freestyle in another first attempt.

Jessica Rush placed third in the 500 at 6:36 while Smith, Gregory and Moore got their first times in the long event. Smith placed fourth while Moore had the fifth-fastest time.