Area Notes: Alandry Below making name for herself at Advance; Marcum moves; Hale returns to sideline 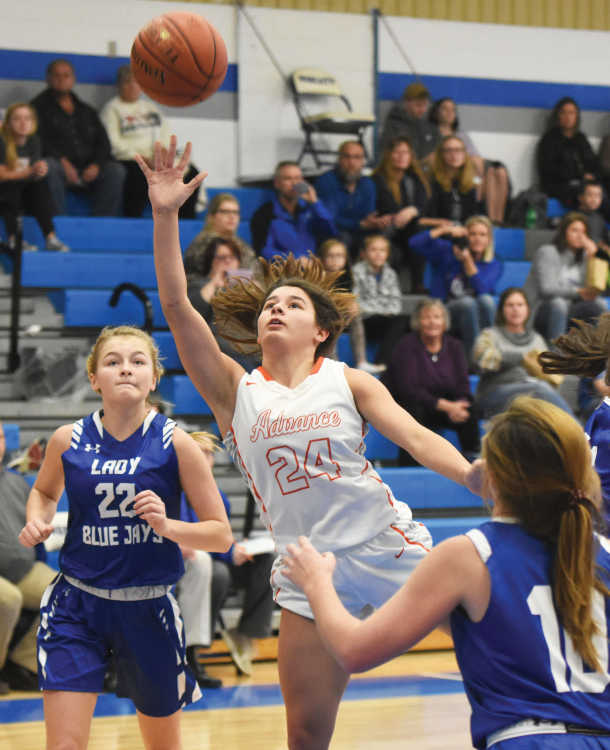 Advance's Alandry Below (24) attempts a shot between a pair of Oak Ridge defenders during the first quarter of the consolation championship game of the Delta New Year's Tournament on Thursday, Jan. 9, 2019, at Delta High School.
DEXTER STATESMAN/Kyle Smith

After all of her teammates headed to the sideline with less than 2 minutes left before tipoff of the Advance Hornets’ recent girls basketball game against Oak Ridge, sophomore Alandry Below grabbed a teammate to rebound, as she shot a few free throws.

Her dedication to succeed has drawn the attention of girls basketball fans across Southeast Missouri. They may not know her name yet, but they know Advance has a talented guard on its roster.

Below is averaging 23.8 points a game through Advance’s first 13 contests.

The sophomore scored a season-high 33 points in the Hornets’ 56-47 win over Scott City. She has broken the 30-point threshold four times, including three 32-point outings.

She has scored in double figures in each game, although she had a season-low 12 in the Hornets’ 53-30 loss to Kelly on Friday night.

What makes her a special player?

“She’s a lot stronger than everybody,” Advance coach Ethan Barr said. “She’s athletic and her skills are coming around, too. She played AAU in the summer. That helped her out a lot. She’s coming around. She’s becoming a good player for us.”

After shooting a few free throws before the consolation championship game of the Delta New Year’s Tournament, she went 4 for 8 but the next night she made all four attempts against Kelly.

“When she’s missing, she’s always wondering what she’s doing wrong,” Barr said. “That’s a good thing. She wants to get it right before the game.”

The Bernie softball team will have some big shoes to fill this spring after learning all-state pitcher Alyson Marcum has transferred to Naples High School in Naples, Florida, for the spring semester.

The left-hander will play softball for Florida SouthWestern State in Fort Myers, Florida, next fall.

Her mother got a job there, so that she and Alyson’s retired father, Chuck, can be close to their daughter in college.

Marcum moved back to Bernie before her sophomore year and played for the Mules for two seasons following the retirement of her school administrator father. She has moved around frequently over the years and lived in Bernie during her second- and third-grade years.

“I still consider myself a Bernie girl,” she said.

Back in the game

Former Bernie and Dexter boys basketball coach Paul Hale joined Advance’s coaching staff for the Southeast Missourian Christmas Tournament and will continue in that role for the remainder of the season, according to Advance head coach Bubba Wheetley.

Wheatley believes that Hale will provide the extra motivation that his team needs down the stretch run.

Hale last coached in 2008 for Notre Dame High School in Cape Girardeau. The Missouri Basketball Coaches Association hall-of-famer led the Bulldogs for four seasons, including their state-championship squad in his final season.