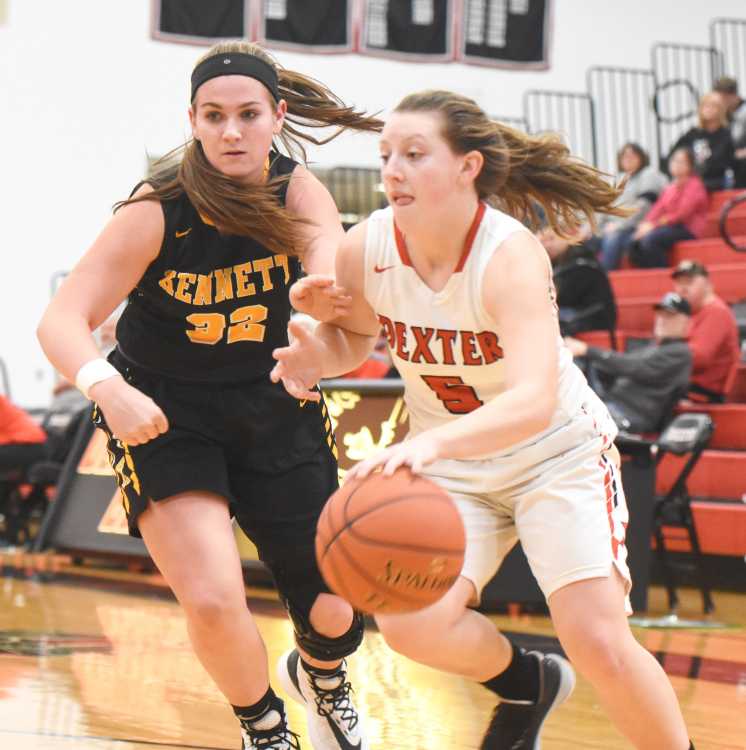 However, the Kennett girls basketball team made things interesting in the end before the Bearcats held on for a 43-37 victory Monday night at the Bearcat Event Center.

“We played a great first half,” Dexter coach Eric Sitze said. “We were aggressive. We were active, getting easy looks. Then we came out flat in that third quarter. The girls got tight that last half. We … didn’t play with confidence.”

The Indians (7-7, 0-2) cut into their deficit in the third quarter, outscoring Dexter 16-7 but still trailed 36-19 entering the final period.

The Indians cut their deficit to 38-34 behind six straight points by Kyra Jaco, who paced them with 13 overall. She scored off a turnover, swiped the ball from Dexter and scored on a layup and sank two free throws with 2:20 to play to cut her team’s deficit to four points.

“Your season doesn’t end on one bad half and we played a very bad first half,” Kennett coach Aaron New said. “Your season’s in trouble when your girls won’t come out and continue to compete. I thought our girls came out and played hard (in the second half).”

Dexter’s Dulcie Pullen stopped the surge by going 2 for 3 from the free throw line with less than two minutes remaining.

The Indians weren’t done. Jaco sank a foul shot with 1:26 to go and Anelle Harris scored inside to slice Dexter’s lead to 40-37 with one minute to play.

Dexter clinched the win by forcing a pair of late turnovers by the Indians, and Magi McBride went 3 for 4 from the free throw line in the final 33.9 seconds.

“I’m glad they held on,” Sitze said. “They did a good job … the last couple of minutes, just taking care of the ball and hitting free throws.”

The Bearcats, who avenged a 40-32 loss to Kennett in the conference tournament in December, used the fast break to score easy baskets on transition to take a 10-0 lead and a 16-2 advantage after one quarter.

“We got frustrated,” New said. “We just lost what we were supposed to be doing out there. We let some girls run out on us, cost us some easy buckets that we wished we had back in the first half.”

Dexter’s pressure defense played a role in six first-quarter turnovers by the Indians, while holding them to 1-for-11 (9%) shooting in the opening period.

The Indians scored their first basket with 1:54 left on a jumper in the lane by Caroline Patton. They missed their first seven shots of the game and had five turnovers when the shutout ended.

Sydney Asberry scored 10 of the Bearcats’ first-quarter points, including the first eight of the game. She finished with a game-high 17 before fouling out in the fourth quarter.

The Bearcats not only scored transition baskets after Kennett turnovers but scored six points after grabbing defensive rebounds and beating the visitor down the floor.

While Kennett struggled from the field, the Bearcats sank 6 of 7 (86%) shots from inside the arc.

The Indians didn’t score a field goal in the second quarter, going 0 for 10 from the field.

Dexter scored the first eight points of the second with four coming from Pullen. Jaco scored the Indians’ first and only point of the quarter on a free throw with 2:05 remaining.

The Bearcats finished the half with an exclamation point. Asberry scored on a 3-point play with one minute left and Alexa Werneck scored on a fast-break layup, finishing a feed by McBride, to give them a 26-point halftime lead.

Dexter again made a high percentage of shots in the second quarter, going 5 for 8 (63%) from inside the arc.

JV — Dexter defeated the Indians 33-32 Monday night for their third win in four games this season.