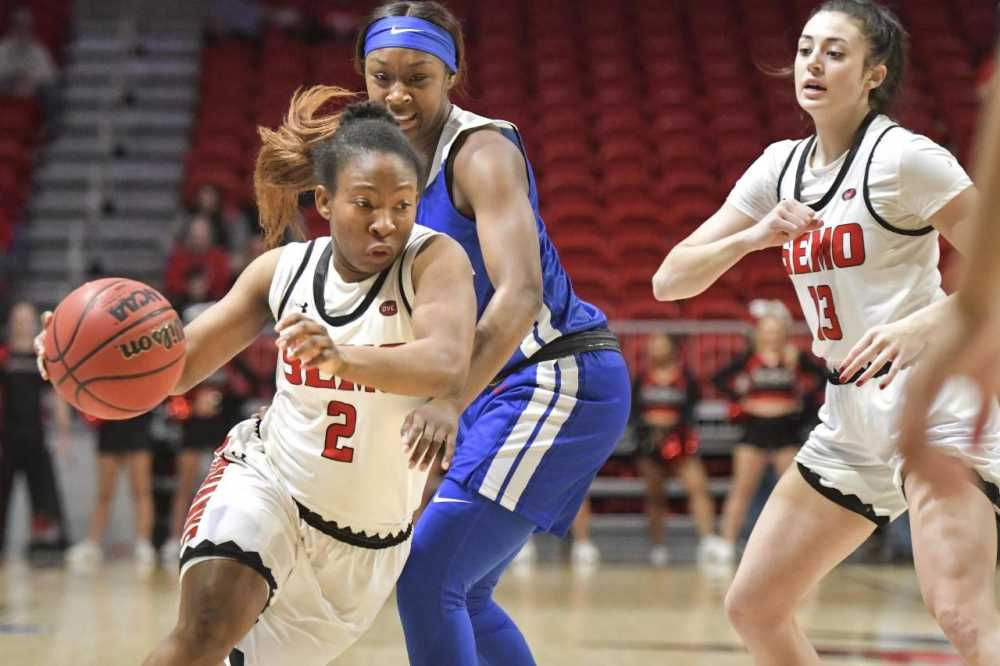 Carrie Shephard (2) drives for the basket against Tennessee State's Jaden Wrightsell (3) as Southeast's Jessie Harshberger (13) looks on in OVC women's basketball at the Show Me Center, January 11, 2020.
Tyler Graef ~ tgraef@semissourian.com

“We went out there with supreme confidence,” said redshirt senior Carrie Shephard, who led Southeast with 15 points, including 3 3-pointers.

Fifth-year coach Rekha Patterson saw the contest as a reset from Southeast’s recent losses to Murray State and Belmont.

“Over the last two games we did not play with this type of tempo,” said Patterson. “We have to play fast (because) that’s when we’re at our best.”

Southeast roared to a 20-8 first quarter lead and the Redhawks never looked back in posting a 29-point victory.

“When we’re playing the way we did (today) and pushing in transition,” said Patterson, “we can be difficult to defend.”

Tennessee State appeared in the NCAA Tournament as recently as 2015 – but the squad’s skill level and on-court performance have fallen off dramatically in the intervening years.

Pruitt, a 5-foot-6 sophomore, scored 14 points for Southeast on 60% shooting from the field and also converted on two 3-pointers for Southeast.

“T.P. does an amazing job of getting into the paint and creating opportunities for us,” said Patterson.

“Taelour is my captain in training,” added Sheppard, who is in her final year of playing eligibility.

Shephard led the squad with seven assists – one of them a move that reminded spectators of the Harlem Globetrotters, who are coming to the Show Me Center Feb. 3.

With four minutes left in the first quarter, Shephard flipped the ball behind her back as she was going out of bounds.

Sophie Bussard caught the ball and immediately put up a successful layup, one of seven points for the freshman from Silver Lake, Indiana.

“It’s a pass I know I can make,” said Shephard.

“I saw Sophie cutting and flipped the ball behind me and she was there.”

Shephard pointed out that Bussard is her practice partner and they work on these “magic” passes frequently because “you just never know when you’ll need them.”

Shephard had struggled in her last two outings, producing just 16 points total in defeats against Murray State and Belmont.

“It was good to see the ball go in after these last couple of games,” said the 24-year old Shephard, oldest player on the roster.

“I’ve worked too hard to let two games take me out of it.”

Shephard, whose playing history has been riddled with injury, dove after loose balls against Tennessee State, heedless of the potential risk.

“Every game matters. Every possession matters,” asserted Shephard. “If I have to dive after a ball, hey, whatever it takes.”

Sheppard was joined in double figures by Pruitt, Roshala Scott and Tesia Thompson, who scored 14, 11 and 10 points respectively.

For the Tigers, sophomore Jazmine Young had 15 points and junior Taylor Roberts scored 10.

Patterson is concerned that her team continues to foul the opponent too often.

Tennessee State got to the charity stripe 31 times and converted on 26 freebies. By contrast, the Redhawks went 7-for-10 at the foul line.

“We foul too much (and) I’m concerned about that,” said Patterson. “We’ll look at that and we’ll fix it.”

Southeast continues its long homestand Thursday when it has an OVC rematch against Austin Peay (10-5, 1-3).