Late run not enough as Portageville falls to Caruthersville 54-47 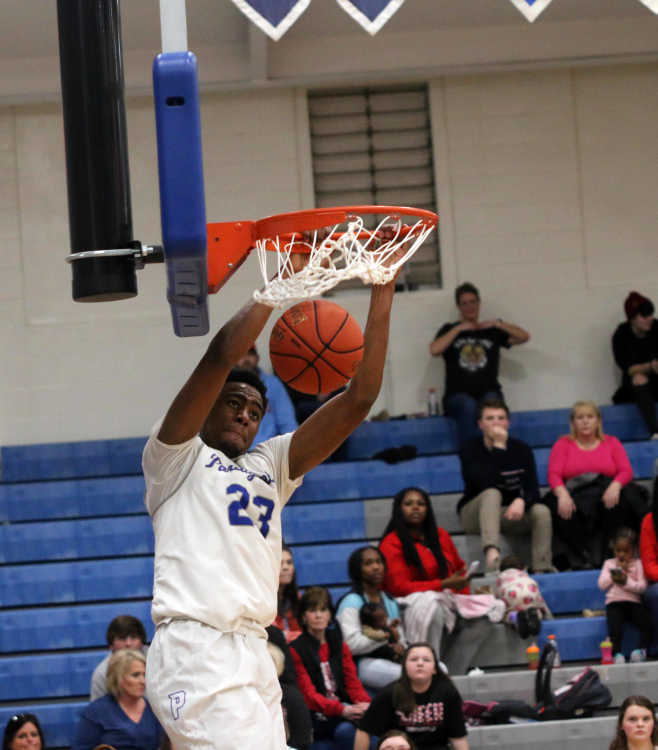 PORTAGEVILLE, Mo. — What looked like a blowout between Portageville and Caruthersville was the exact opposite on Friday night at Portageville High School.

After a first half where the Bulldogs only made two field goals, the second half proved to be a much different story, albeit in a 54-47 loss.

In the first half, a relentless Tigers defense was too much for the Bulldogs. Caruthersville forced 11 turnovers in the first quarter and held Portageville (8-5, 0-3 Bootheel Conference) to zero field goals.

The Bulldogs’ only points came from the free-throw line, where they went 2 for 4 in the period.

“We’ve been working on our defense quite a bit,” Caruthersville head coach Lamont Bell said. “We were playing well up until we started getting the tick-tack fouls. We had to kind of change up what we were doing. Overall, I think we played well.”

Nearly midway through the second quarter, the Bulldogs were finally able to get their first field goal, by Drew Irby, with 4:50 left in the half.

Irby also made the second field goal of the half for Portageville, after drilling a three-pointer from the left-wing.

However, baskets came few and far between for the Bulldogs through the first 16 minutes, as they trailed 27-12 at halftime.

“That was the best pressure we’ve faced all year,” Portageville head coach Jason Irby said. “It’s hard to simulate that in practice. We tried to prepare them for that, but they would come out and hit us in the mouth.

“We turned it over right-and-left, and we didn’t take great shots when we did shoot. We’ve struggled to shoot, honestly, all year, so that cost us in the end. I’m proud with how the kids fought.”

After time to refresh and adjust, Portageville looked like a much different team to start the third quarter.

“We kind of changed our press break up a little bit, and we tried to play a little bit bigger,” Jason Irby said. “We haven’t done that a lot with both Lamonte Dixson and Brendan in there, which helped us a little bit on the boards. We finally made, at least, a few shots, and I think our pressure bothered them a little bit. We got some turnovers, but we could never get over the hump.”

The Bulldogs outscored the Tigers 18-12 in the third, with Drew Irby and senior A.J. Hicks leading the way. Both players had five points, while senior Lamonte Dixson had four.

Junior Kelan Bills also added a bucket, while fellow junior Brendan Garmon ended the quarter with a bang, as he stole the ball and finished with a breakaway slam dunk that brought the Portageville fans to their feet.

Garmon’s dunk wound up cutting the Caruthersville (6-3, 3-0 Bootheel Conference) lead to single-digits, at 39-30.

Feeling the momentum, Jason Irby told his team during the brief break between quarters that all he wanted was for his team to get the game in single figures.

“That dunk was able to accomplish that,” Jason Irby said. “I knew they were a little tired, but they had to play them harder, and we had to block out and do the little things. That’s something we’ve been preaching all year. We did some of those things well, but we didn’t convert at the free-throw line. We had a lot of opportunities, and like they say, “free throws, a lot of times, win or lose games,” and they did for us tonight.”

Getting to the line wasn’t the problem for the Bulldogs. Converting was.

Irby led Portageville with 19 points and was 7 of 13 from the free-throw line. Hicks was the other Bulldog to reach double-digits in scoring — with 10 — while shooting 5 of 9 at the foul line.