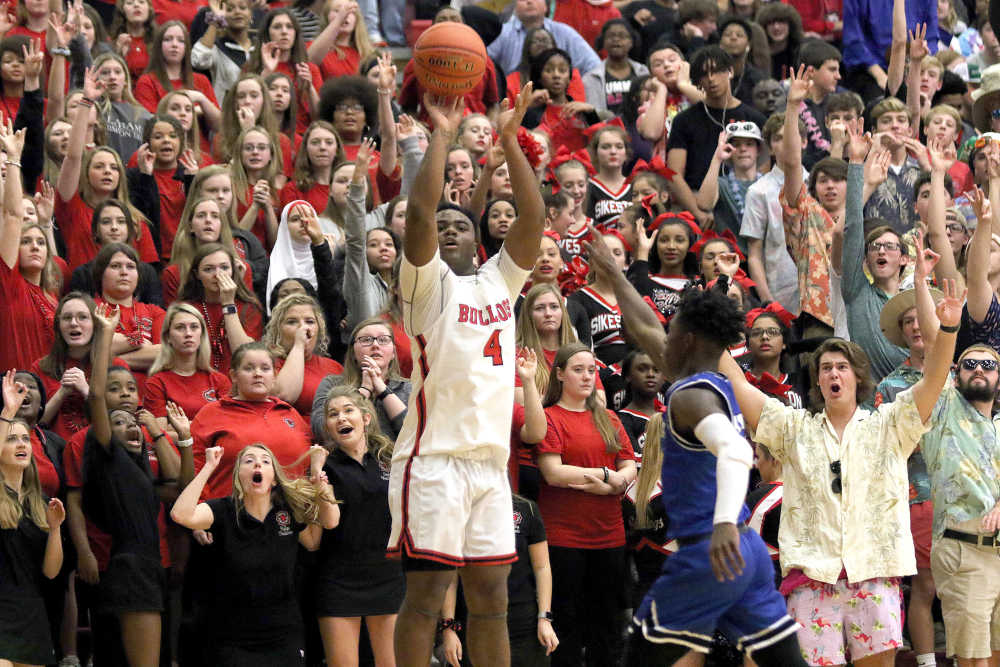 The Sikeston student section reacts as Lontas McClinton pulls up for a shot against Charleston Friday, Jan. 10, 2020, at the Sikeston Field House.
David Jenkins/Standard Democrat

SIKESTON – After suffering a disappointing one-point loss to Sikeston in the SEMO Conference Boy's Basketball Tournament 28 days ago, Charleston was hoping for a little payback on Friday.

However, the Bulldogs once again were ready for the state’s No. 1 ranked Class 3 team as they defeated the Bluejays 71-63 in front of an energized crowd at a sold-out Sikeston Field House.

The Bulldogs continue to be a thorn in the Bluejays’ side, having defeated Charleston four straight times and eight out of the last nine meetings.

Playing its first game in 12 days, Sikeston showed no signs of rust after coming up short in the St. Dominic Christmas Tournament on Dec. 30.

Howard racked up 17 of his points in the second half, but he also had some help from his teammates, most notably senior classmate Nick Harrison who scored 15 points with 15 rebounds, both career highs.

Senior Clark Steward grabbed 14 rebounds to go with his five points, six assists, and one blocked shot, not to mention his crucial ball-handling to help take the load off Howard.

“I thought it was a complete team effort,” Sikeston coach Gregg Holifield said. “Clark settles us. He has the ball in his hands a lot. Plus, he’s recovering from his knee injury, and to get as many rebounds he did, he does a great job of blocking out.

"Lontas [McClinton] battled foul trouble but came up big late for us. I thought Leroy [Atkins] and Colby [Henson] just picked us up when we needed it and hit some big shots. Nick had a great mindset. He’s had a great mindset all week. Coach [Brian] James and I talked, and we thought Nick would play well because he’s had a focus and did great things all week in practice.”

The game hit its critical juncture in the waning moments as Charleston rallied from a nine-point third-quarter deficit and whittled the lead down to 63-61 on an Isaiah Gillespie drive with two minutes left. Still, the Bulldogs answered on the ensuing possession when Howard rifled a one-handed pass to a wide-open McClinton underneath for an inside basket to push the lead back to four.

The Bluejays’ Samuel Bledsoe then drilled a pull-up jumper on the following trip, but once again, Sikeston had an answer, this time with Howard driving inside and dumping off to Harrison for a basket with 1:04 left in the game to lead 67-63.

Charleston (10-3, 1-2 SEMO) tried to answer back, but Bledsoe’s deep, contested 3-pointer was off the mark. Steward corralled the rebound and launched an outlet pass to a streaking Atkins who laid it in for a 69-63 lead with 42 seconds left.

The Bulldogs sealed it for good following a Charleston timeout. Bluejay senior Terridean Bogan missed on a corner three, which McClinton rebounded and found Atkins, who dribbled the length of the floor for another layup to reach the final margin.

“I thought our guys played well,” Holifield said. “You have to give Charleston credit because they pressed us hard full-court the whole game, and we had some turnovers, but overall I thought our guys handled it pretty well and got some buckets out of it. It was pretty well-played honestly. It’s such an emotional game, but the ball bounced our way.”

The Bulldogs finished with 16 turnovers in the game, but limited Charleston’s points off those turnovers.

Sikeston led 12-10 after the first quarter and still led 34-32 at the half behind Harrison’s 11-second quarter points.

Bogan hit a 3-pointer to open the third quarter to give the Bluejays a 35-34 lead, but that was the last lead they would have. On the next trip, McClinton scored inside, followed by a Howard pull-up jumper to give Sikeston a lead they would not relinquish.

Howard scored 12 points in the third quarter to help his team to a 51-47 lead heading into the fourth quarter.

Knowing that teams will try to keep the ball out of Howard’s hands with constant double-teams, Holifield continues to be impressed with his senior playmaker.

“I thought he was outstanding – just very composed,” Holifield said of Howard. “He was under pressure all night with two guys running at him. I say all the time there’s not a better guard in the state. Not only is he a great player, but he’s a great guy, and he’s been awesome to coach.”

Charleston got as close as 56-55 on a Bledsoe basket midway through the fourth, but Atkins drilled a huge 3-pointer from the corner to give the Bulldogs a 59-55 cushion with five minutes left.

Atkins scored seven of his 12 points in the fourth quarter.

Gillespie and Bledsoe each scored 17 points to lead the Bluejays.

One area Charleston can point to as a factor in the loss is on the free-throw line, where they shot just 9 of 24 (38 percent), including missing all four of their attempts in the fourth quarter. Sikeston made 14 of 20 (70 percent).

The Bluejays also only hit two 3-pointers as the Bulldog defense shaded Bogan and Bledsoe throughout the night while surrounding 6-foot-5 post-Blessin Kimble.

“I thought our guys did a really good job of trying to execute what we worked on,” Holifield said. “We knew it was going to be an emotional game, and our guys worked hard all week. There is no better place to be than at the Field House with Charleston and Sikeston on a Friday night. It was just a great crowd and what an incredible high school atmosphere.”

Charleston coach Danny Farmer elected not to comment after the game.

The Bluejays will play at New Madrid County Central while Sikeston will travel to play Park Hills Central on Tuesday with junior varsity games starting at 6 p.m.