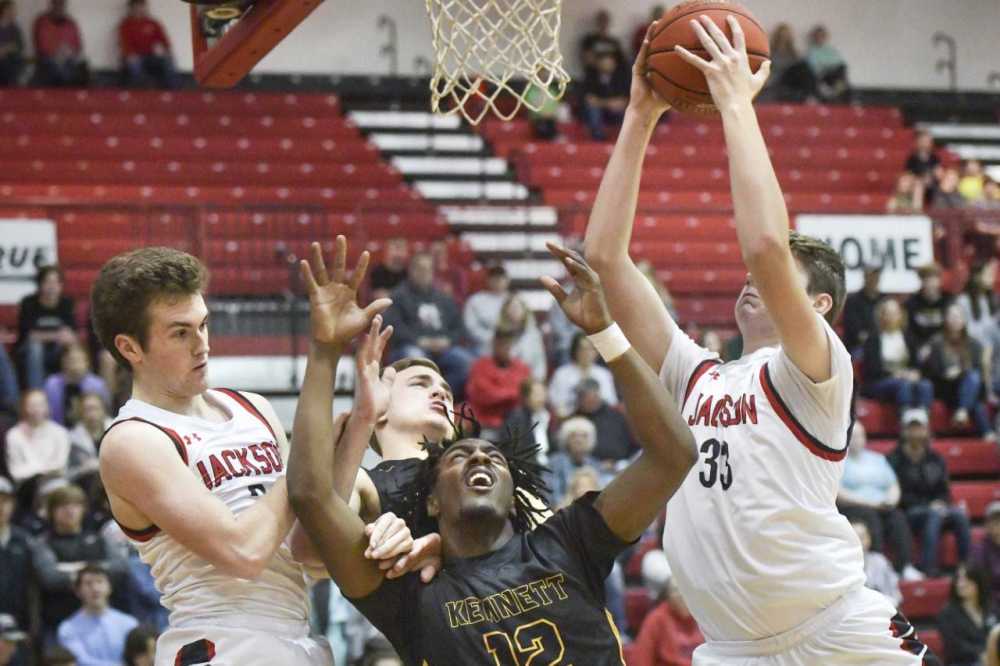 One thing we knew with certainty right from tipoff of the Jackson-Kennett boys basketball game Friday.

The Tribe was going to win.

It was a tale of two halves as Jackson took a five-point lead into the locker room, 24-19.

A blistering start to the second half by Andrew Halford’s Kennett squad – five 3s - put the visitors up to stay.

Kennett sophomore Ben McMullan landed three quick 3s in the for the winners and junior teammate Kobe Gates also drilled two from beyond the arc in what was ultimately the pivotal third period.

Jackson coach Darrin Scott also noted Kennett’s physicality in the post put his squad on its heels a bit.

“(Kennett’s) rebounding in the (3rd quarter) was really important,” Scott said, “and that’s what sticks out in the game.”

Kennett pulled ahead by three, 40-37, as the final period commenced.

The Indians from the Bootheel would maintain that advantage to the end.

“They made some shots and we lost (track of) #34 (Kennett’s McMullan) in the third quarter,” added Scott, “and that was a killer for us.”

“Looking ahead, we have to focus on the fact that we have to improve everything,” Scott said, whose team has now lost four straight.

“We have to make sure we play hard for four quarters and are consistent.”

Gates paced Kennett with 17 points. La’quez Pulliam and McMullan had 12 and 11 points, respectively.

For Jackson, senior Lane Crowden led all scorers with 21. Sophomore Nick Wasilewski, who had two first-half blocks plus a powerful first quarter dunk, also posted in double figures with 11.

‘To come up here (to Jackson), and find a way to win is big for us,” said Halford.

Jackson’s impressive size – with Wasilewski and Crowden at 6-foot-5 and freshman Clayton Ernst at 6-foot-8, made Halford change his game plan.

“We came in knowing we’d have to take more 3s than we’re comfortable with because of Jackson’s length.”

Halford said he was pleased his team bounced back after a disappointing loss Tuesday, 53-45, to New Madrid County Central.

Halford declined to explain why the senior was held out Friday.

Jackson goes on the road beginning next Wednesday to play in the Lindbergh Flyer Tournament. Scott’s team will not be at home again until February 3, when they face Woodland.

Kennett, winners of seven of its last nine, next plays Tuesday at Bernie.