Donettes Hold Off Naylor At Buzzer, 34-32 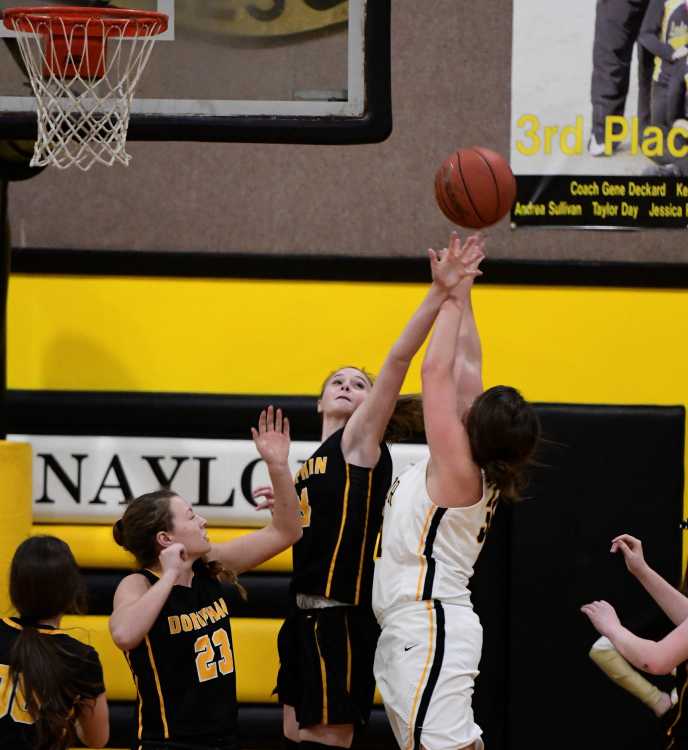 Doniphan's Allison Skaggs attempts to block Naylor's Faith Sullivan during Friday's Ozark Foothills Conference game at Naylor. The Donettes held on for a 34-32 win over the Lady Eagles.
Steve Inman

NAYLOR - The Ozark Foothills Conference girls basketball race this season is definitely going to be different for the first time in five years.

One night after the Naylor Eagles handed Neelyville its first league loss since 2015, the Doniphan Donettes made the conference chase even more interesting Friday with a tight 34-32 win at Naylor.

Sophomore Bailey Carson broke a 31-31 tie on an inside basket with 1:10 to play and the Donettes dodged two final chances by the Eagles to take the lead in the final 10 seconds.

The win put the Donettes at 3-0 in OFC play with Naylor and Neelyville both with one league loss. Doniphan is set to play Jan. 23 at Neelyville.

The Donettes (9-4) and Eagles (8-6) matched tough man-to-man defenses all night that kept each team's top scorers bottled up. Doniphan made 13 of 40 shooting attempts with top scorers Emily Ederer and Olivia Creutz held to one point apiece. Naylor was 11 of 43 from the field with leading scorer Kaylynn Johnson managing just six points.

"Emily got in foul trouble and we had to depend on subs with an out-of-the-normal lineup," said Doniphan coach Adam Epps. "Everybody stepped up including some sophomores and said 'I've gotcha coach.' That's tough stuff and they carried us right there. I'm proud of them."

"It wasn't our shooting night and we still had a chance to win the game. There's nothing to hang our head about," said Naylor coach Gene Deckard.

Senior guard Ady Jones led the Donettes with 11 points including seven in the third quarter to give Doniphan its biggest lead at 23-16. Junior Timber Turner added eight including a clutch basket with 1:50 to play for a 31-30 lead. Madison Eddington came off the bench to score seven points.

"Timber is in there to play defense and rebound. She's an absolute grinder. She deserved every one of those buckets tonight," Epps said.

Naylor appeared at the start to still have plenty of momentum left over from Thursday's 20-point over Neelyville, jumping out to a 9-1 lead. Johnson hit a layup off the opening tip, Moman scored inside and Sullivan connected twice inside the lane.

Jaylin Dutton's basket and Jones' shot inside the lane brought the Donettes back within 9-5 after one quarter.

Doniphan slumped to 1-of-10 from the field in the second quarter while Naylor was even colder at 1-of-12. The Eagles controlled a 12-9 lead at the half.

Jones hit the game's only 3-pointer early in the third quarter to spark a 7-0 run to give Doniphan its first lead at 16-14. Eddington's basket-and-one gave Doniphan it's biggest lead of the night at 23-16 with 1:46 left in the period.

Naylor battled back to tie the game at 27-27 on Day's basket with 3:25 to go in the fourth quarter. Johnson's one-hander put the Eagles on top 30-29 with 2:40 left but Turner answered from the field and Naylor hit just two of six free throws in the final 1:27.

Freshman Allison Skaggs pulled down the rebound on a missed free throw with :04 on the clock, forcing Naylor's final chance to come on a midcourt shot that fell short.