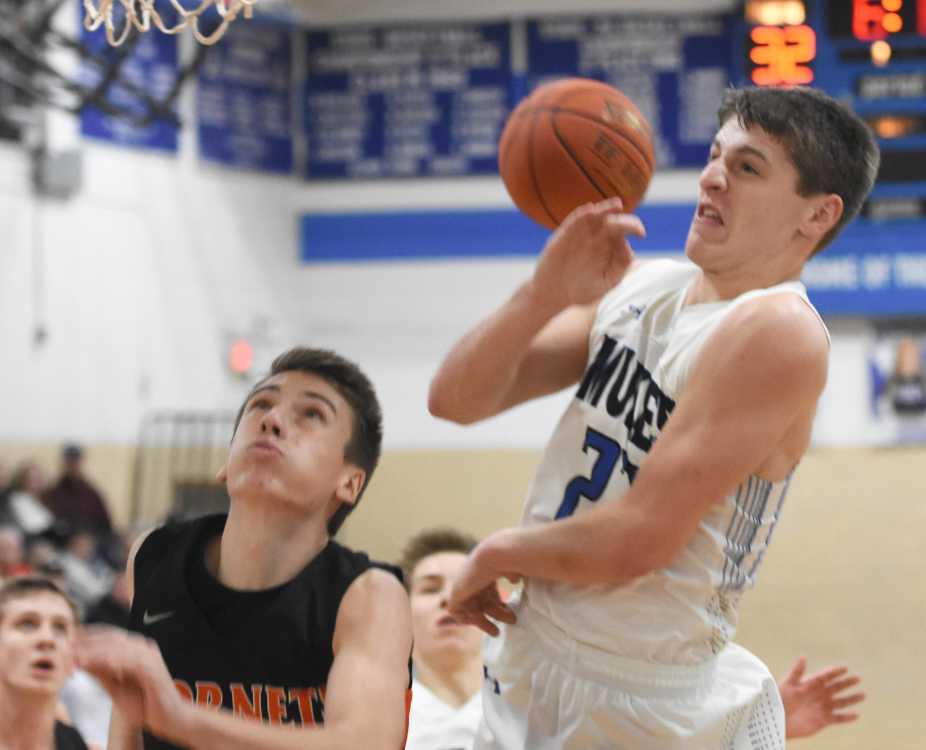 The Bernie Mules routed the Advance boys basketball team 83-61 Friday night in a battle of two of the top three teams in the SCAA standings.

The Mules (11-2, 2-0 SCAA) and Dexter (6-4, 1-0) are the only teams who remain unbeaten in league play with a week’s worth of games left before the seed meeting Jan. 20. The rivals and front-runners will meet next Friday night with the winner likely earning the top seed for the SCAA tournament that will begin Jan. 27 at Dexter.

“They just outplayed us,” Advance coach Bubba Wheetley said. “They beat us on the boards, (with) their quickness (and with) their shooting. They just beat us.

“We had a lot of breakdowns on defense. We had two guys on the ball. You can’t do that.”

The Mules came out playing tenacious defense and hitting a high percentage of shots.

Bernie converted five Advance turnovers into seven points in the first quarter, while shooting 10 of 17 from the field, including 4 of 9 from 3-point range.

The Mules made 12 3-pointers overall and four players scored in double figures.

“That’s what you need,” Long said. “You need balance. Our guys are doing a good job. We’re working pretty hard. We just want to stay hungry and try to improve.”

“We did OK on offense,” Long said. “If we share the ball, we can make some things (happen).”

“They had a couple of guys put the ball in the hole,” Long said of the Hornets. “Below’s tough to guard one-on-one. We struggled with that, obviously. We fouled him too much.”

Zoll sank three 3-pointers in the first quarter, Vaughn made another and Suiter scored eight points inside.

The Mules scored 10 of the first 13 points of the game with Below’s 3-pointer accounting for Advance’s only points.

Bernie stretched its lead to 10 (17-7) on a steal and layup by Suiter and a 3-point play by Geohagan on an inbounds play.

Vaughn’s 3-pointer gave the Mules a 25-11 advantage late in the quarter, but Schrader made a turnaround jumper in the lane and Below sank a 3 to cut the Mules’ lead to 25-16, heading into the second quarter.

Bernie continued to get good shots in the paint behind a strong performance on the boards and went 6 of 8 from inside the arc in the second quarter. The Mules cooled from outside, making only 2 of 7 3-point shots.

Advance cut down on the turnovers, making only three in the quarter, but the Mules made 6 of 8 free throws to extend their lead to 22 points (49-27) by halftime.

The Mules continued to add to their lead in the third quarter, outscoring Advance 17-12 despite committing seven turnovers. However, the Hornets could only convert those miscues into two points, and Bernie took a 66-39 lead into the final quarter.

Advance tried to mount a comeback from outside the arc but went 0-for-7 on 3-point tries in the third.

The Hornets outscored Bernie 22-16 in the fourth quarter, but the game already been decided.

“I saw some good things,” Wheetley said. “We’ve got a long way to go. We’re going to get better.”

Advance played without second-leading scorer Landon Dailey, who is out for personal reasons, according to Wheetley. He will be out for the foreseeable future.