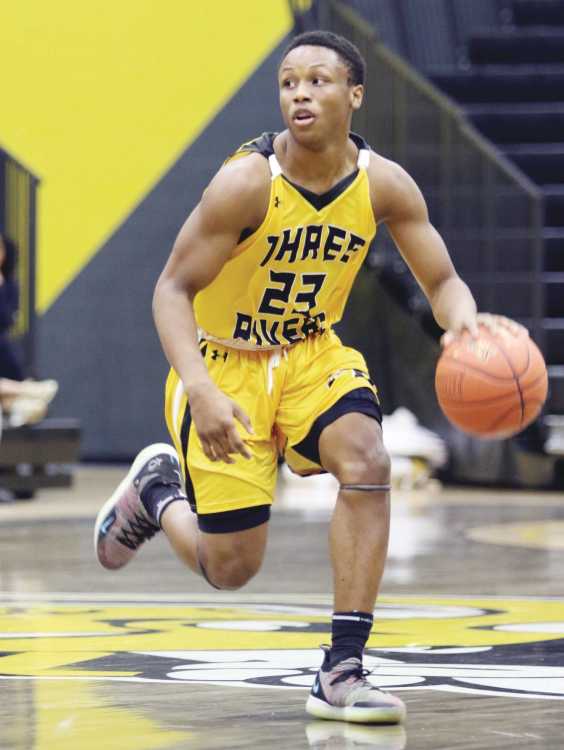 Three Rivers has decided freshman point guard Kevin Jones, a Sikeston alum, will redshirt this season due to an injury.

In the third game of the season against Indian Hills, Jones injured his wrist going for a rebound.

What was initially thought to be a sprain turned out to be a ruptured ligament.

After meeting with a hand specialist Wednesday, Jones is getting an MRI and will have surgery

“I was going to wrap it up and play, but it got to the point where I knew I couldn’t,” Jones said. “It is still swollen to this day and I can’t really put force or any kind of pain on it. I can’t do nothing with my right hand. But I try to do what I can to help out the guys.”

Coming into the season, Three Rivers had visions of Jones and Kinyon Hodges of Cape Girardeau being the team’s primary two point guards.

Jones came off the bench and played roughly 15 minutes in each of those first three games.

He led the team with four steals before fouling out in the season-opening win against Link Year Prep.

Then he went 3 for 6 shooting for seven points, three assists and two rebounds in an 18-point win against Wabash Valley, but again fouled out and committed eight of the Raiders’ 18 turnovers.

Then the Raiders faced a tough test in Indian Hills, which was ranked No. 6 in the nation at the time, as it also is now, and features Tyon Grant-Foster, a 6-foot-7 wing who is signed with Kansas.

Jones played 18 minutes and was 3 for 5 on 3-pointers as the Raiders went 6 for 25 on 3-pointers, and 3 for 7 overall with three rebounds, two assists, as well as three turnovers and just two fouls.

“The first game, I was nervous. My second I was getting there and the third, I was really settled. I was playing my game and then the injury happened. So it really kind of shut me down and I got really depressed,” Jones said, adding that he appreciates everyone who has checked in with him to see how he’s doing. “I never had a real injury. I worked very hard over the summer to get my body right, in the offseason to get right, work on my game. Now with this injury sitting me out the whole season, it is really hard and depressing but I’m just trying to get my mind off of it.”

Despite being sidelined, Jones is still one of the team’s vocal leaders during games.

“I’m always an excited player. Even though I’m down right now I need to be up for my teammates because I’m the vocal leader. They really look up to me to bring my energy,” Jones said.

This Saturday’s close loss to then seventh-ranked Mineral Area, which has moved up to fifth in the latest poll, the intensity affected Jones as the Raiders lost by a point after Mineral Area made a 3 with 4 seconds left in the game.

“It brought me back to Sikeston High School just how big of a rivalry that was. It was huge. It brought back jitters for me and I wasn’t playing. I had butterflies, I just wanted to be out there, help out the guys and play my role,” Jones said. “I always heard about conference play and the Region XVI. I’m from Sikeston, so you hear about Three Rivers, the MACs, the Moberlys. It is real big and I really wanted to play in it. I got a relationship with the sophomores here and I’ll never play with these guys ever again so it really hurts.”

While sitting out is tough, Jones is treating this as a blessing in disguise. With his shooting hand perpetually in a protective brace, he’s dribbling, shooting free throws and hitting floaters with his left hand.

Watching practice and games from a distance allows a different perspective, as well. He’s learning the game differently, watching rotations, pick and rolls, who’s open where and when and what he might do.

He can’t help but anxiously think about next year while his teammates are trying to focus on this year. While home, his best friend and St. Louis Billikens sophomore Fred Thatch Jr., who himself hasn’t played since Nov. 27 because of a form of myalgia, which is affecting his leg muscles. told Jones that the Raider was going to have a big year next year and show people what they missed out on. Then he’ll have another year after that.

“I feel like I’ll reach my peak just coming an extra year,” Jones said. “An extra year to learn basketball from the coaches and just playing in this region and this conference.”