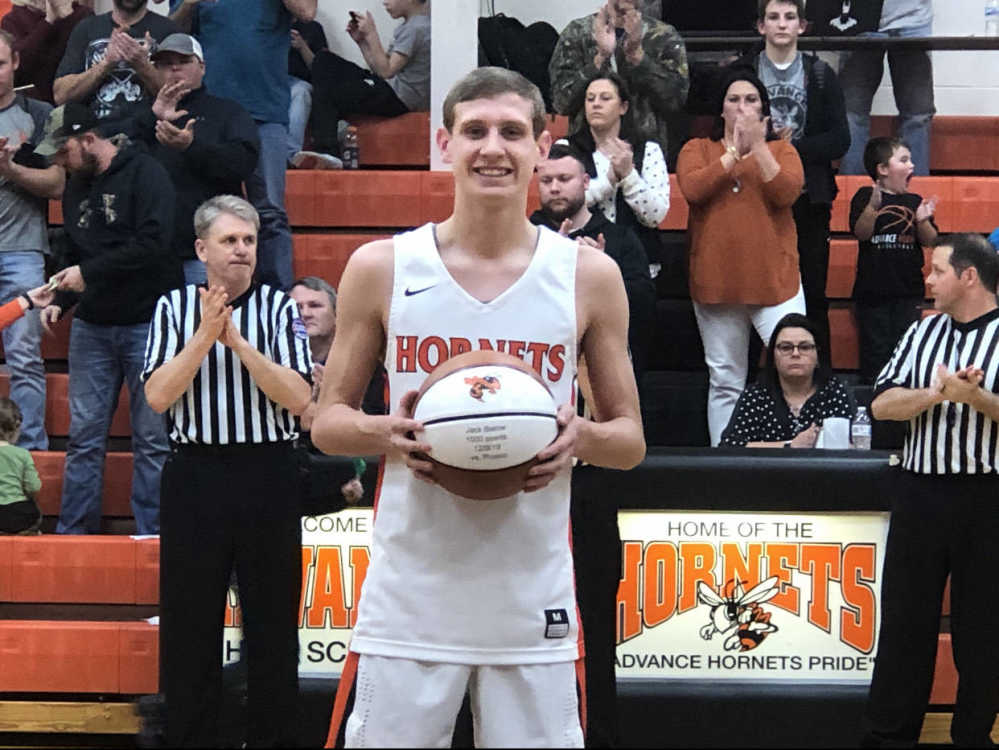 Advance senior Jack Below holds the commemorative ball he was presented prior to his team's game against Clearwater on Tuesday, Jan. 7, 2020, at Advance High School. Below was honored for surpassing the 1,000 career point mark.
PHOTO PROVIDED

The Advance Hornets honored senior Jack Below, and he helped the Hornets to an 83-75 win over Clearwater on Tuesday night at Advance High School.

Below was presented a basketball before the game for surpassing 1,000 career points. He scored his 1,000th point Dec. 9 against Puxico. After Tuesday’s game, Below had 1,177 points.

Below scored nine points in the fourth quarter where the Hornets held on for the win.

Landon Dailey and Jaren Schrader joined Below in double figures with 17 and 16 points, respectively.

The Bernie Mules overcame a 10-0 run at the start of the game to beat the Neelyville boys basketball team 55-47 on Tuesday night at Neelyville.

Tyler Suiter led Bernie with 16 points, Landon Zoll had 14 and Johnny Vaughn got 13.

Bloomfield and Chaffee combined for 17 3-pointers, but the Chaffee boys basketball team sank 11 to lead it to a 65-57 victory Tuesday night at Chaffee.

Bloomfield took a 16-8 lead after one quarter but the Red Devils fought back in the second to tie the score at 27 at halftime. They outscored Bloomfield 38-30 in the second half.

Gage McNeil paced Bloomfield with 15 points and Jeffrey Jarrell had 14. Both hit a pair of 3-pointers.

Two of Richland’s three injured starters returned to the court Tuesday night, but Tanner Freeman and Andrew Partenberry weren’t enough to lead the Rebels to victory.

Freeman scored a team-high 16 points and Partenberry had 14 in the Rebels’ 55-48 loss to the Woodland boys basketball team at Marble Hill. Both didn’t play in the Bloomfield Christmas Tournament.

Jackson Bell remains out with a knee injury.

Jamon Frymire paced Woodland with 15 points, Kyle Balsman had 12 and Jarid Frymire had 10.

The Bloomfield girls basketball team generated no more than seven points in any quarter and lost 40-21 to the Chaffee junior varsity on Tuesday night at Chaffee.