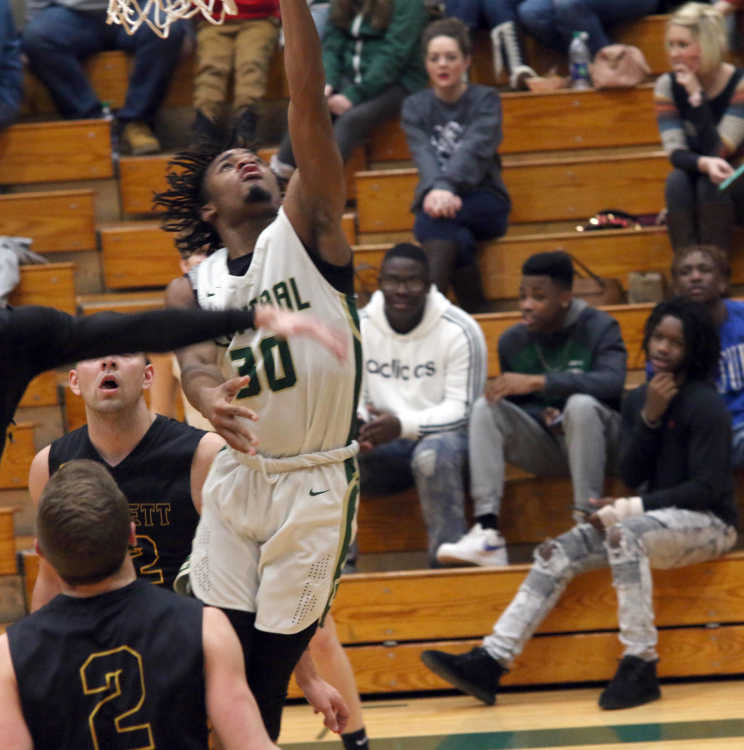 However, it was a whole different story starting the third quarter, as the Eagles held the Indians to 12 points to take an eight-point lead into the fourth, en route to a 53-45 win at New Madrid County Central High School.

A balanced scoring attack was where NMCC did the most damage — four players reached in double-figures in the scoring column.

“That’s the main thing right there,” NMCC head coach Lennies McFerren said. “That lets you know the balance is there, and that’s what our team has to have — balance. Not just one person. I don’t think we can win with just one person.”

Senior Ke’von Williams and junior Donnie Brown led the Eagles, with 12 each.

Williams shot 5 of 8 from the floor and capped off his night by throwing down a thunderous slam dunk that brought the NMCC fans to their feet, toward the end of the fourth quarter.

Williams also finished with a double-double, after bringing down 10 rebounds.

“Ke’von here lately has been coming on,” McFerren said. “It’s not a surprise that he got a double-double because he’s been the workhorse for us.”

Brown shot 5 of 10 from the floor, and 2 of 3 from three, to go along with three rebounds.

Sophomore Shamar Williamson finished with 11 points, on 4 of 6 shooting, and hit all three of his free-throw attempts. Senior Christen Phillips was the last Eagles player to reach double-figures, after notching 10 points, on 5 of 14 shooting, and grabbing five rebounds.

Commanding the glass was an issue for the Indians, the entire game. NMCC out-rebounded Kennett 27-12, and head coach Andrew Halford noted that — along with turnovers — as part of the problem to his team’s sluggish play.

“We didn’t rebound the ball well in the first half,” Halford said. “We were just kind of fortunate to get to halftime with a good last 20 seconds. I think we had 11 turnovers in the first half, but those two things were the issue from start-to-finish.

“Them offensive rebounding, and us turning it over and giving them extra possessions. They were efficient around the basket. They were catching it around the block and the short corners, and when they caught it there, they were finishing and doing a good job with that.”

Getting into the flow of the game was difficult for Kennett to do, and Halford said that giving NMCC extra possessions were a significant reason why.

“When the ball is being possessed by the other team, it’s disheartening when they were able to create so many turnovers,” Halford said. “Giving them extra opportunities to score again. It affects the game, and we got to be better.”

Senior Jackson Henfling was the lone Kennett player to reach double-digits in scoring, with 13. He shot 4 of 9 from the floor, and 2 of 4 from three.