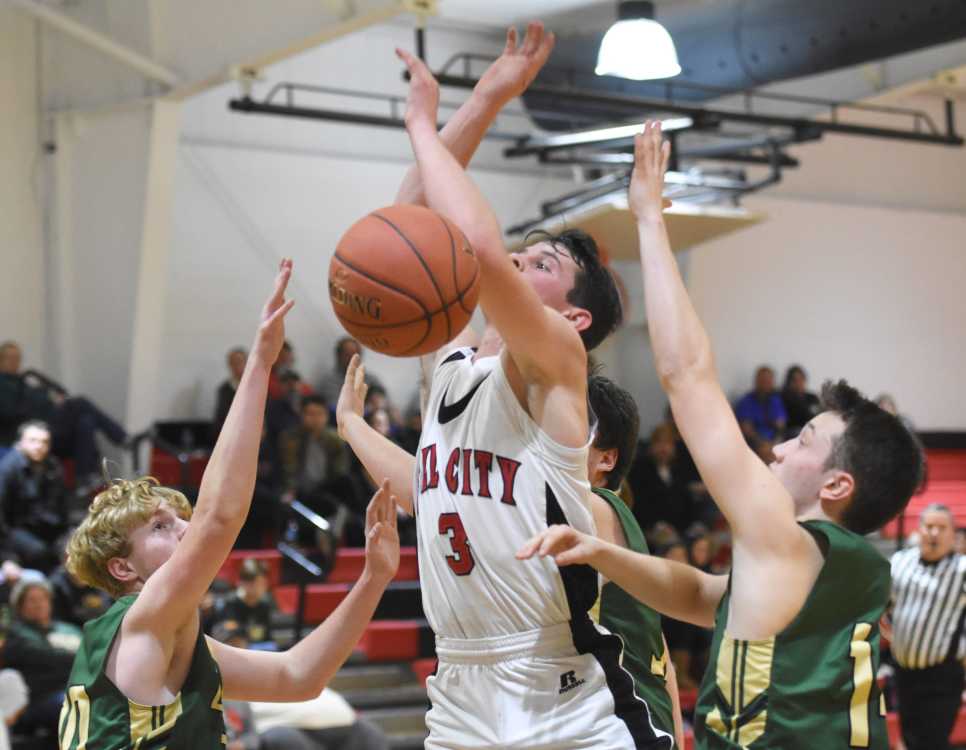 Bell City's Luke Nichols loses his grip on the ball while driving toward the basket between Zalma's James Wade (left) and Eli Ware during the first half Tuesday, Jan. 7, 2020, at Bell City.
DEXTER STATESMAN/Kyle Smith

The teams who entered the boys basketball game with a combined 3-14 record haven’t been involved in a lot of close games, so when things got tight, many of the players on both teams didn’t know what to do.

The Bulldogs made fewer mistakes and got a big fourth quarter from sophomore Nate Ware for a 73-64 victory at Bell City High School.

The Bulldogs took an 11-point lead into the fourth quarter but put up quick shots early, giving Bell City a chance to rally.

After Austin Hunt’s free throw sliced the Bulldogs’ lead to 58-50, they began to slow the pace, run offense and wait until an open shot became available.

Zalma has only two seniors and two juniors on its varsity roster.

Something else Zalma did better than the Cubs was shoot free throws. Zalma made 13 of 17 free throws, while the Cubs shot only 47 percent (8 of 17).

Ware scored 11 of his game-high 28 points in the final quarter where the Bulldogs held off Bell City who cut its deficit to eight points early in the fourth.

“He’s been our leading scorer and rebounder all year,” Fernetti said of the sophomore. “We’ve asked a lot of him because there have been games where he’s had to run point. There are games like tonight where we put him in the post a lot. He’s a very good player for us, both inside and out. The fact that he’s only a sophomore. That’s definitely exciting (for our future).”

Bell City coach Dom Johnson said the loss came down to an uneven performance by his players.

“We had chances to win it,” Johnson said of his team, whose losing streak reached six games. “We had spurts where we had lack of effort. That’s how I feel we played tonight. We played hard in spurts and some spurts — just lack of effort.”

Slowing down Bell City’s leading scorer Luke Nichols was a key to victory for Zalma.

Nichols paced Bell City with 21 points and was the only Cub to score in double figures.

Bell City led for most of the first quarter after the lead changed hands twice early. After trailing 2-0 and 4-2, the Bulldogs scored six straight points to take an 8-4 advantage.

The Cubs rallied with 13-0 run to move ahead 17-8. Hunt scored six points during that stretch and Andrew Hicks had five.

Zalma sliced its deficit to one point on a 3-pointer by senior Caleb Steinberg (19-18), but Nicholas Heuring answered with a 3 and the Cubs took a 22-20 lead into the second quarter.

The Bulldogs adjusted defensively in the second quarter, taking away Bell City’s ability to drive to the basket whether through the lane or along the baseline.

“We did a lot better once we went zone of identifying who we wanted to guard,” Fernetti said. “At the beginning of the game, we played man and just focused in on a few guys. We did a better job of doing that in zone.”

The lead changed hands five times in the second quarter and the score was tied twice.

Zalma went ahead to stay after freshman Elijah Ford drove to the basket, sank his shot and made a free throw before sinking two foul shots with 1:35 to play to give the Bulldogs a 35-34 lead.

The Bulldogs scored six of the quarter’s final seven points to lead 41-35 at halftime.

Bell City trimmed its deficit to three points twice in the third quarter — 41-38 on a 3-pointer by Nichols and 45-42 on a fast-break basket by Jack Duenne.

Sophomore Trey Clark scored six of his 12 points in the third quarter. He and Ware were the only Zalma players to score in double figures.