Bernie stays perfect in district with close win over Neelyville 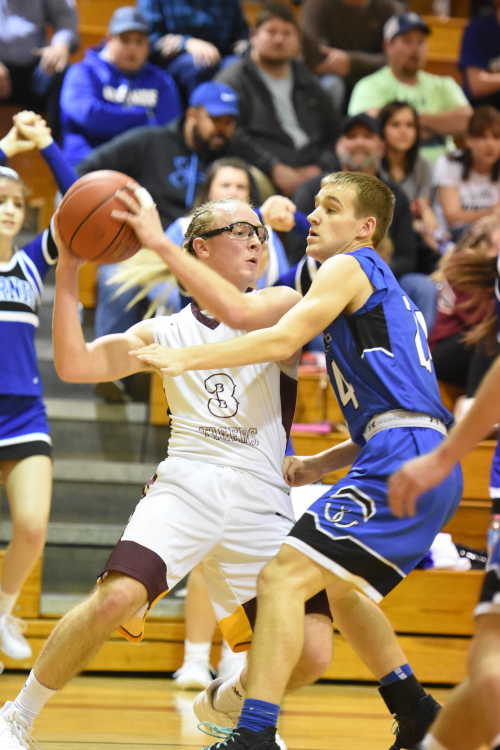 NEELYVILLE - Bernie has established itself as the team to beat in the district ... but by a slim margin.

The Mules picked up a 55-47 win at Neelyville on Tuesday and has not lost to a district opponent so far this season, but two of those five wins were by less than 10 points.

In a potential preview of the MSHSAA Class 2 District 1 championship, Bernie overcame allowing a 10-point run to start the game, then took its biggest lead of the night with a nine-point run through the first half of the fourth quarter and held on for the win. 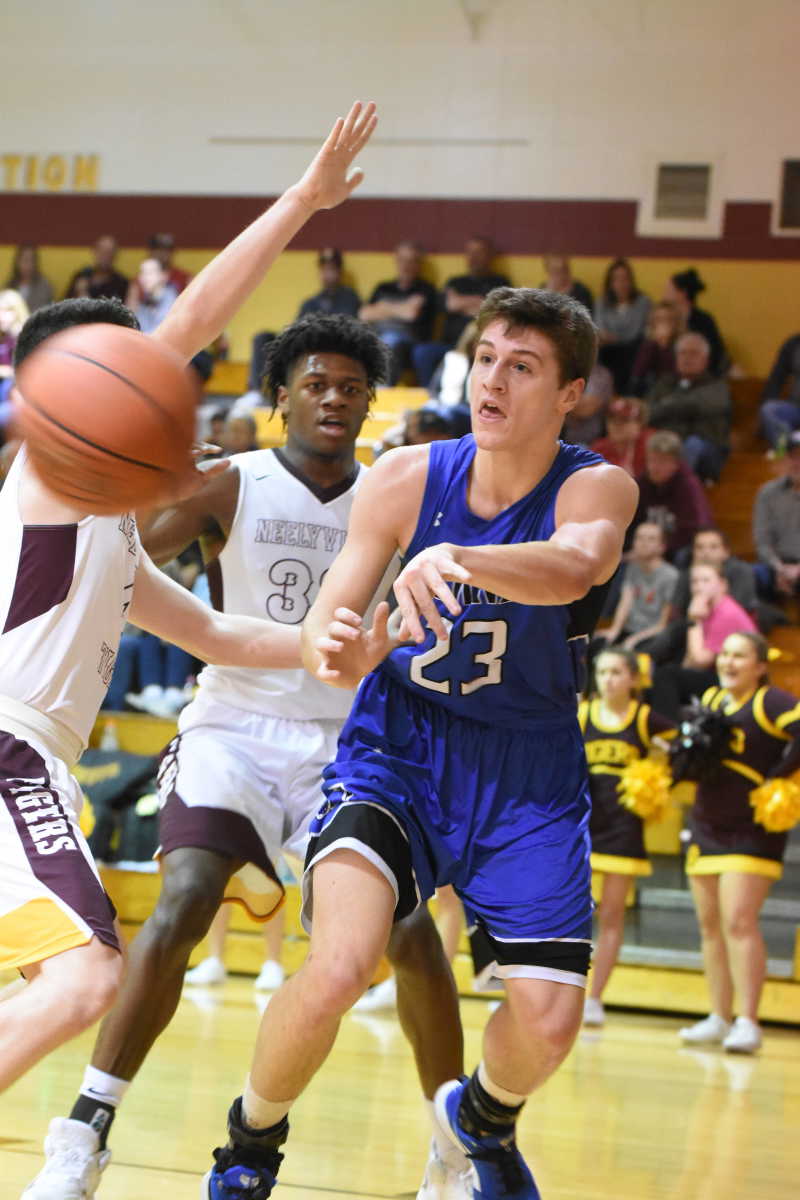 DAILY AMERICAN REPUBLIC/Scott Borkgren Bernie's Tyler Suiter (23) passes to the corner for a 3 while being guarded by Neelyville's Austin Innes, left, on Tuesday in Neelyville.

"Our district is wide open. It really doesn't even matter what anyone's record is come the seed meeting. Doesn't matter who they match up with. It is honestly wide open. It is super ultra competitive. I'm just glad we won tonight," Bernie coach Jason Long said.

Bernie (10-2) beat another district opponent in Hayti for third place in the Bloomfield Christmas Tournament after beating district foe Holcomb in the first round.

"The district is super loaded so at the end of the day when it comes seeding time it really doesn't matter. It's just playing well at the right time and any given night, anything can happen," Neelyville coach Patrick Morton said. "We still have to communicate better (defensively). We have a couple things defensively that we were game planning to do that we didn't do well. We were slow to react and do it, so I just think fine-tuning some things defensively and putting ourselves in the best situation to guard good teams is a big improvement that we need to make."

After Neelyville tied the game at 42 with a 3 to open the fourth quarter, Bernie's Tyler Suiter got a putback, Landon Zoll came off a screen for a 3 and Johnny Vaughn scored in traffic for the Mules with 4 1/2 minutes left in the game.

After two scoreless minutes, the Mules added another bucket off a steal and held Neelyville without a field goal until Curtis Fowler scored through a foul with 1:08 on the clock. He missed the free throw, but the rebound bounced out of bounds off Bernie.

Neelyville passed high inbound to Fowler under the rim, but he was called for a charge before rising for the potential dunk.

Not out of it, the Tigers poked away the inbound, dove on the loose ball and called time.

Down six with exactly a minute left in the game, the Tigers looked for a 3 before Kobe Hayes, who finished with 10 points, drove and missed an off-balance layup.

Bernie was 2 for 5 on free throws down the stretch, but the Tigers missed all their shots at the other end.

Fowler led Neelyvilel with 13 points but had just two in the first half while drawing plenty of attention from the Bernie defense.

"We didn't score many points, but they only scored 47 so that means we did a decent job of keeping it out of (Fowler's) hands for him to only make (13)," said Long, adding that Bernie needs to work on giving up too many offensive rebounds. "I've got hard-working kids and when they see something they need to get better at, they are accepting of that responsibility."

The Tigers were aggressive on offense early and opened with the first 10 points of the game, eight of those from point guard Austin Innis, who finished with 11 points.

Innis made back-to-back 3s, then found himself isolated on the wing and drove for a layup.

However, Vaughn got Bernie on the scoreboard with a 3 nearly halfway through the first quarter and the Mules took the lead in less than two minutes later with a 12-point run.

"Anytime you play Bernie you've gotta be ready for those runs. They're very, very good at making those runs very quickly," Morton said.

There were five more lead changes and two ties during the rest of a back-and-forth first half. Neither team was able to take more than a four-point lead.

The Tigers went into the locker room up by four after Parker Jeffries scored with under a minute to play. They then opened the second half with the first three points to go ahead by seven, their biggest lead since Bernie scored its first basket, but the Mules quickly tied it up at 33 midway through the third quarter and took their first lead of the second half with a 3 with 2 1/2 minutes to play.

Down three, Neelyville held possession for most of the final minute of the third quarter before getting it to Fowler on the block for a turnaround bucket, but with 13 seconds left, the Mules were able to score just before the buzzer.

"The first time we played them, offensively, we just were not ready to face anything they had coming at us," Morton said. "Tonight, I feel like we shot the ball better. We had 15 turnovers, which we still can afford to bring those down a little bit. But 15 is better than what we've been doing. I thought we were more aggressive offensively."