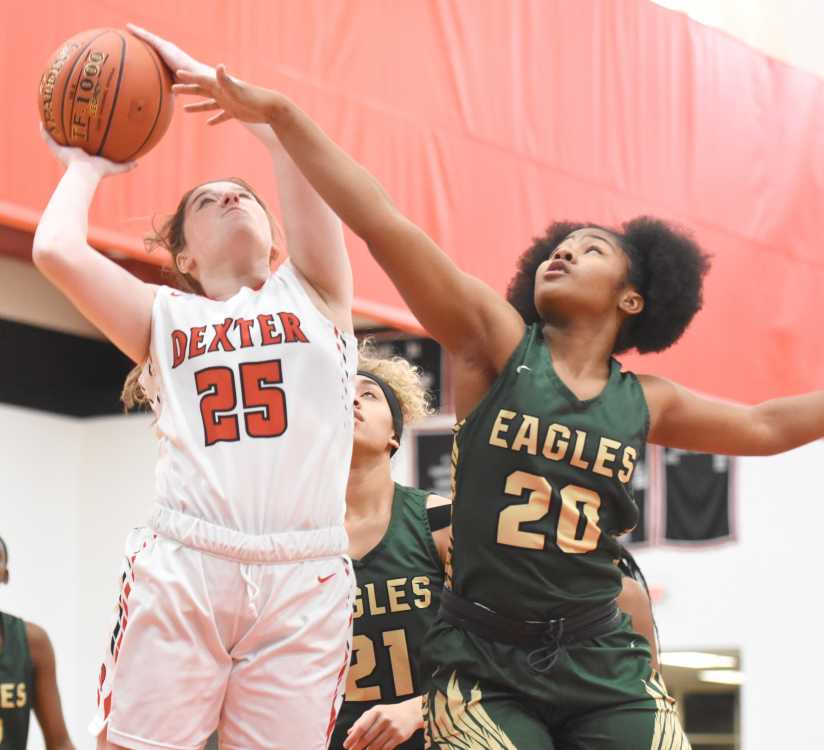 DEXTER — The New Madrid County Central Eagles soared to a big lead in the second quarter Monday night at the Bearcat Event Center.

The Eagles used a pressing defense and a height advantage inside to rout the Dexter girls basketball team 72-39.

NMCC (11-3) scored the first eight points of the second quarter to take a 21-11 lead. After Dulcie Pullen scored a fast-break layup to interrupt the rally, the Eagles scored the next 14 points to push their lead to 35-13.

“We’ve had a lot of games where we’ve started out slow,” NMCC coach Toby Heeb said. “Then we kind of find the spots where they’re throwing the ball. We start anticipating a little bit better after we get a quarter under our belts, then we got going. … Once they stole one and got a layup, they wanted to do it again and again.”

Hartman, who missed the first half of the season because of an injury, made her first start Monday night after making her season debut on Friday night at Delta.

“She played about half the ballgame (against Delta),” Heeb said. “Today was the most she’s played. We’re still trying to watch her minutes. She’s working through some rust right now. I’m trying to knock it all off.”

Hartman and Ayannah Ruff, both juniors, paced the Eagles with 18 points each, and classmate Shakyra Wright added 16.

The Bearcats (2-9) struggled with turnovers in the first half, committing 15 with NMCC converting those into eight points.

“We fed their intensity with turnovers,” Dexter coach Eric Sitze said. “We’ve got to slow down, reverse the ball, pass-fake, learn how to handle the ball better and take care of it. … New Madrid’s a good team. They played well. We’re learning every game. We’ve just got to keep grinding and trying to get better.”

NMCC controlled the boards, obtaining several second-chance and a few third-chance opportunities, while holding the Bearcats to one shot on most possessions.

“Our post players have been doing good,” Heeb said. “The back of our zone has been doing good. We’ve really been stressing rebounding, holding everybody to one shot.”

That combination allowed the Eagles to outshoot Dexter 48-20 over the first two quarters. That big advantage in shot attempts enabled them to overcome a sluggish shooting night. NMCC made only 33% (16 of 48) of its attempts in the first half.

Conversely, the Bearcats shot a solid 45% (9 of 20) over the first two quarters.

The lead changed hands five times in the first quarter. Pullen, who led all scorers with 19 points, scored nine of Dexter’s 11 in the first, including baskets that gave the Bearcats 2-0, 4-3 and 6-5 leads. Caitlin Giles found Pullen open underneath the basket for the latter’s first two field goals.

The Eagles outscored Dexter 34-14 in the third quarter to take a 70-33 lead into the fourth, where the clock ran continuously because of the 30-point mercy rule.