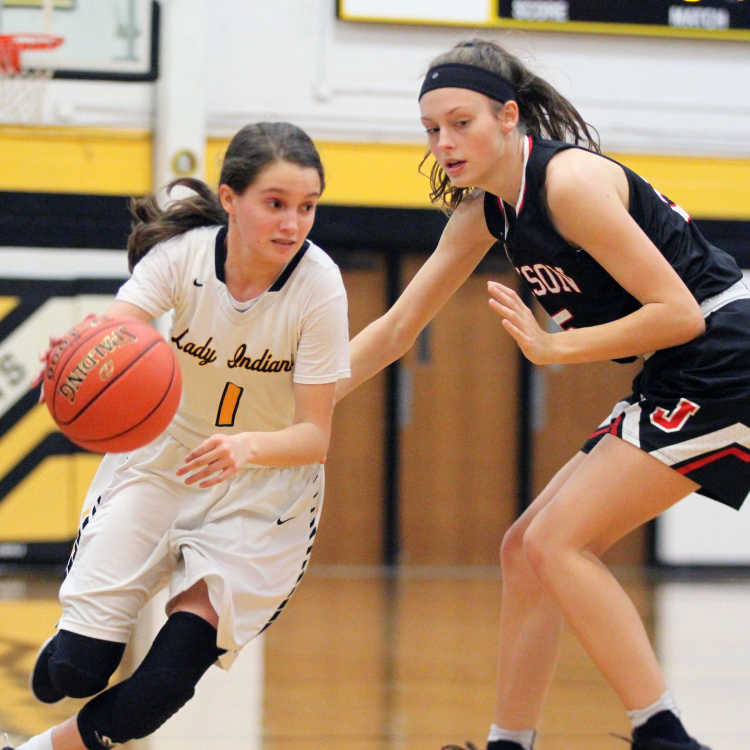 “The layoff makes things hard,” Abernathy said. “But I love our schedule. It makes the first game in January more challenging but I wouldn’t change our schedule for anything because I love being able to let the girls have time off during Christmas and enjoy the break.”

Jackson returned to the court for the first time since Dec. 21 Monday night and found a way to open SEMO Conference regular-season play with a victory.

Jackson jumped out to an 18-4 lead after one quarter and played the host Kennett Indians even the rest of the way on its way to a 40-26 road win.

“I thought we did some good things,” Abernathy said. “They really packed it in with their zone and eliminated passing lanes. We really had to move the ball on offense to get open looks. I thought we did a good job on the defensive side of the ball. If we could have finished a little better on offense I think we could have stretched it out more. But overall, I was pleased with our performance.”

Kennett, which was coming off a fifth-place finish at the 16-team Lady Royals Classic, enjoyed its own spurts of success after the opening quarter. Kennett, which collected over 15 steals, won the second period 7-6 and scored the first five points of the second half to cut Jackson’s lead to 24-15 with 5:46 left in the third quarter.

“I thought our girls played extremely hard,” Kennett coach Aaron New said. “Defensively, we rotated well out of our zone. We also forced some turnovers out of our press. I was really happy with the way we played defensively tonight.”

Jackson responded with its own 11-1 run to increase its lead to 35-16 by the end of the third quarter. About a minute later, Jackson took its largest lead of the game at 38-16 when Piper Guilliams knocked down a 3-pointer with 6:47 remaining.

“We did a good job in our half-court offense,” Abernathy said of the second-half response. “We were trying to get the ball to the short corner elbow areas and then play out of those areas. We were able to do that and get some good things out of it. I wish we could have shot it a little better. I think we can shoot it better than we did tonight but you will take a win on the road anytime you can get it.”

Kennett, which struggled to score in transition most of the night, scored three transition baskets in the final six minutes of regulation. Kennett scored 12 of the final 14 points to narrow the final margin of defeat to 14.

“We are still behind on offense with some of our youth,” New said. “We are trying to get some offense in transition. But when we run in transition we are still not making layups. We’ve got to get that fixed and if we do we will be a better team moving forward.”

Junior Madison Lambert paced Jackson with 13 points. She hit two of her team’s six 3-pointers, made a pair of 2-point baskets, and knocked down 3 of the 4 free throws she attempted.

Guilliams, who scored half of her team’s 18 first-quarter points, also finished in double digits with 12 points.

Jackson (7-2), which is ranked No. 10 in the latest Class 5 state poll released Jan. 3, has the remainder of the week to prepare for a Saturday morning showdown at 11:30 a.m. at Parkway Central. Jackson fell to Parkway Central 51-37 in a Class 5 state quarterfinal last season.

“They are big and really good,” Abernathy said. “They beat us in the state quarterfinals last season. They bring back both of their post players and a really good guard off of that team so it should be a good challenge for us.”

Kennett (6-6) returns to action Thursday at 6 p.m. when it visits nearby district rival Malden.

“Thursday is a big district game for us,” New said. “We need to go up there and play well. I told the girls, ‘The next two days of practice will define where we are.' If we have two bad days of practice and don’t get a win on Thursday what we’ve accomplished so far will go down the drain." 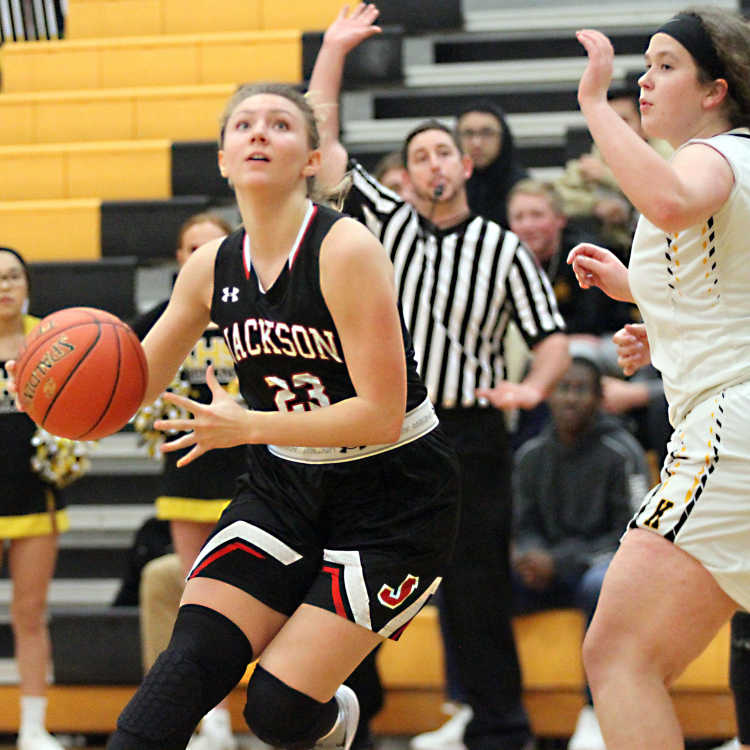 Photo by Dustin Ward, staff
Jackson’s Piper Gulliams (23) penetrates to the basket while being guarded by Kennett’s Ara Spielman in a varsity girls basketball game Monday night at Kennett High School.
Order this photo
Respond to this story