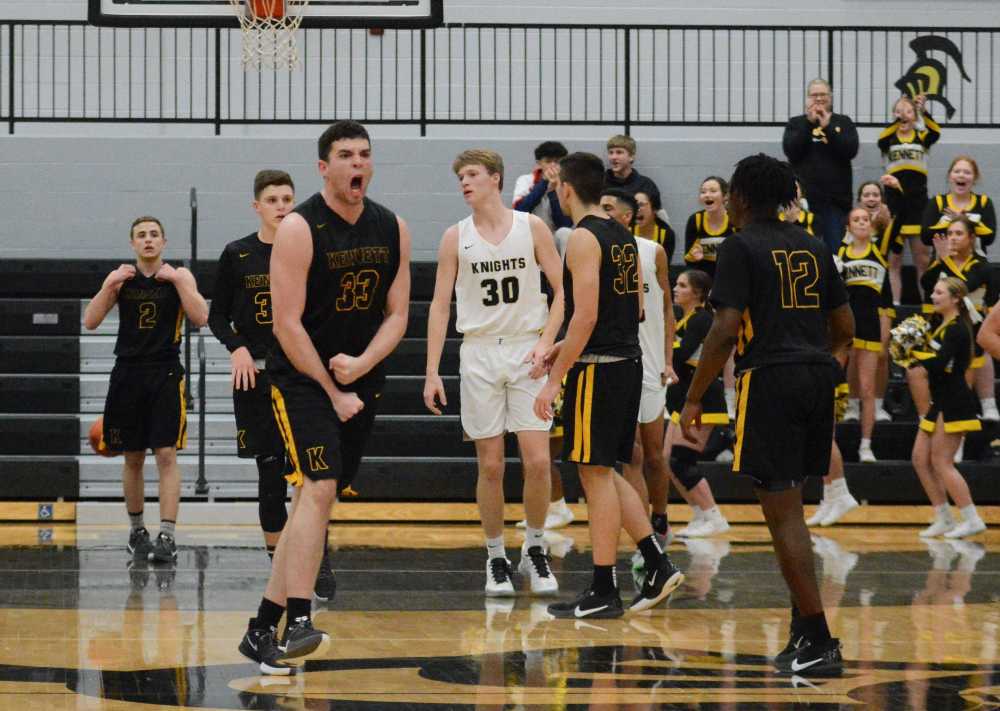 FARMINGTON – Jackson Henfing sank the second of two clutch free throws, then turned and let the Farmington student section know about it while pumping his arms in excitement.

His perfect trip to the line put visiting Kennett ahead with 4.7 seconds to play on Friday. An equally crucial defensive stand ultimately preserved that lead.

Knights guard J.P. Ruble was called for an offensive foul after crashing into Henfling on a drive with four-tenths of a second remaining, and the Indians prevailed 64-63.

Kennett (10-3) grabbed a 62-55 lead after a layup by Kobe Gates punctuated a lengthy possession with 1:58 on the clock. But the margin evaporated when Farmington (5-5) mounted an 8-0 run.

Jonah Burgess drilled a 3-pointer from the left corner off an inbounds play, and the Knights pressured Kennett into a pair of crucial turnovers near midcourt.

Ruble took a clean steal the other way for a layup, then put Farmington in front 63-62 with 18 seconds left on a 23-foot splash after Isaiah Robinson disrupted a dribble and was fouled.

Kennett called a timeout to set up a potential game-winning shot, but Henfling instead delivered the decisive free throws after being bumped on a dribble along the perimeter.

Henfling scored 13 of his a game-high 29 points during the first quarter. Five of his first six shots from the field found the mark, including three consecutive 3-pointers.

Robinson compiled 28 points and 10 rebounds to power Farmington, which committed five turnovers for the entire game despite being short-handed.

Starting guard Bracey Blanton was unable to play due to injury, taking away a key outside shooter. Blane Worley and Carson Sutton also missed the action.

Kennett established a 19-12 lead when Marsayv’aun Harrell finished a conventional 3-point play on a fast break late. He was answered by a Robinson 3-pointer that beat the first-quarter buzzer.

Burgess made a driving layup, and claimed an offensive rebound on the ensuing Farmington possession before kicking out to Brant Gray, whose triple regained a 25-24 lead for the host squad.

But the Indians countered with a 9-0 spurt, ignited by Quav’aun Harrell from beyond the arc. An outlet pass to Ben McMullen created another uncontested basket toward an eventual 33-26 lead.

Interior passing spurred Farmington to a fast start in the third quarter as Ruble dished to Robinson – who had 13 points in the stanza – and Gray set up Burgess for uncontested baskets.

The Knights soon enjoyed their largest lead of the night at 42-39 on the heels of another Robinson triple, as reserve guard Kaleb Detring made a steal and found Owen Tripp for the finish.

The excellent back-and-forth battle continued when Henfling drilled a tying 3-pointer at 44-44. He broke a 48-48 deadlock on another long dagger with 6:09 to play.

Two straight McMullen field goals helped Kennett restore a 60-53 cushion with less than three minutes remaining, and the Indians managed to escape after another three-possession lead slipped away.

McMullen had 13 points, and Marsayv’aun Harrell ended with 11 in the victory.

Farmington received 13 points from Ruble and 10 more from Burgess. Gray and Tripp each tallied four assists.