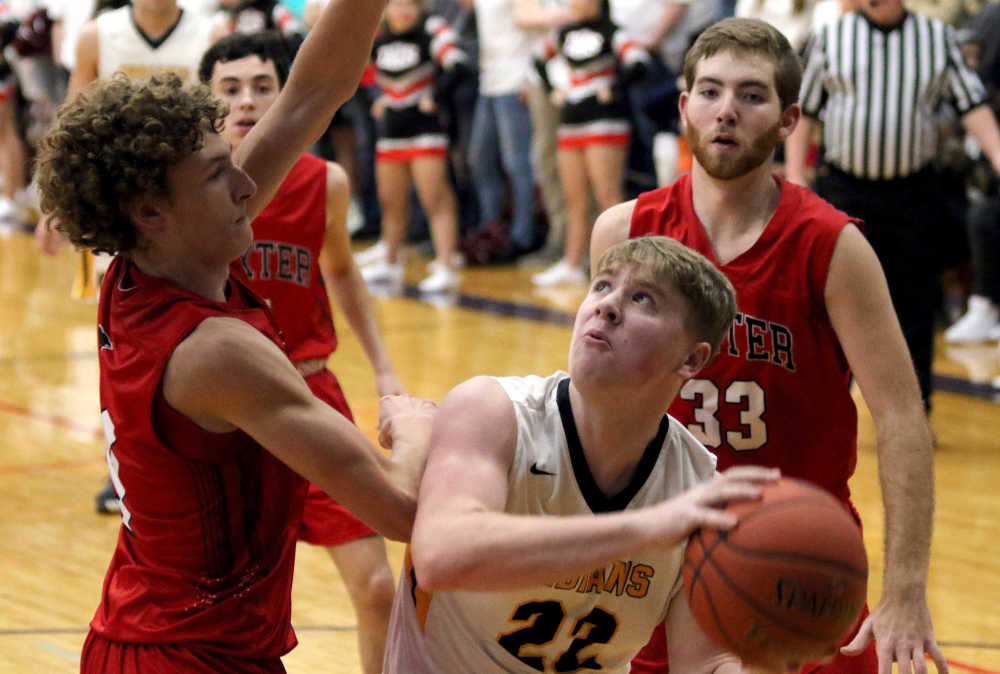 Photo by David Jenkins, staff
Kennett's Bodey Ellis looks for a shot while being guarded by Dexter's Andrew Ellinghouse in the championship game of the Bloomfield Christmas Tournament Monday, Dec. 30, 2019, at Bloomfield High School.
Order this photo

BLOOMFIELD, Mo. - The Kennet Indians finished a win shy of the ultimate prize at the Bloomfield Christmas Tournament Monday.

The No. 3 seeded Dexter Bearcats, which upset No. 2 seeded Bernie 58-56 in a semifinal Saturday, continued to enjoy success against higher seeds at the 16-team tournament Monday.

Dexter took the lead for good in the first quarter and created some key turnovers late to upset top-seeded Kennett 60-37 Monday night to win the 63rd Bloomfield Christmas Tournament.

The Indians trailed by only five points in the third quarter but committed five turnovers in the fourth with Dexter converting those into 12 points.

“We’re throwing fresh bodies out there, subbing three in and three out. That’s what seems to be helping us more than anything,” Dexter coach Chad Allen said of his team. “(We’re) trying to wear them down.”

The Bearcats, which have won six of their last seven games to improve to 6-4, scored the final 14 points of the game to dash any hopes for a Kennett comeback.

Jackson Allen made a pair of 3-pointers during the game-clinching rally, and the Bearcats went 6 for 6 from the foul stripe.

Ben McMullan scored a game-high 22 points for the Indians. He was the only Kennett player to score in double figures.

The Indians struggled from the perimeter in the first half, going 2 for 12 from 3-point range.

“That 1-2-2 defense is working well for us. It’s paying off right now,” Coach Allen said. “That 1-2-2, it really, for the most part, covers the shooters real well. I know McMullan had 15 of the first 18 points in the first half. He had the hot hand, so we really tried to concentrate on him in the second half.”

McMullan scored only seven points after halftime, none in the fourth quarter.

Kennett stayed close in the first quarter, making 3 of 6 shots from inside, and held leads of 3-0 on a McMullan 3-pointer, 5-2 on a McMullan layup and 9-6 when McMullan finished on a drive along the baseline.

The Bearcats took their first lead (6-5) on a pair of free throws by Ellinghouse. Allen’s 3-pointer tied the score at 9 and Henson made 1 of 2 free throws for a 10-9 advantage, a lead the Bearcats never surrendered.

“In the first few possessions, (Dexter) began outworking us with four or five offensive rebounds,” Kennett coach Andrew Halford said. “They set the tone right in those first possessions.”

Henson finished the quarter with a personal 4-0 run from the free-throw line, going 4 for 6.

“I tried to do anything I could to help my team win,” Henson said.

The Indians continued to struggle from the perimeter in the second quarter but began missing from inside as well, making 2 of 8 shots in the period.

“Defensively, we were too soft, too passive,” Halford said. “It flipped over to the offense. We shot so many 3s because we refused to get downhill and get to the basket … with cuts or drives, either one.”

Dexter stretched its lead to nine points behind a 7-0 run fueled by a 3-pointer by Carter Dorton, two free throws by Driskill, one free throw by Ellinghouse and a driving layup by Nichols.

Allen’s second 3-pointer extended Dexter’s lead to 28-15, but the Indians scored the final four points, two on a basket by a McMullan and two on free throws by Jackson Henfling.

The Indians began to gain ground in the third quarter, scoring eight of their 14 points on the fast break.

Kennett sliced its deficit to five points (33-28) on a fast-break basket by McMullan, but the Bearcats took a 41-33 lead into the final quarter on a pair of free throws by Nichols with 2.6 seconds left.

“We had a little 5-0 run there and then we (gave) it right back, giving up some easy 3 looks, giving up some looks around the basket.” Halford said. “And as the game continued … we tried to pressure a little bit, (but we were) giving up layups. They’re so skilled offensively that when we were scrambling and running around, they’re going to find openings.”

“When they switched from zone to man, it gave us fits for a while,” Allen said. “They went on a run. I’m proud of the guys because they kept their composure and settled down, and we finally started running sets. When we run our sets, we’re usually going to get a good look.”

Kennett (9-3) is back in action Friday when it visits Farmington.

“Farmington is a good, solid Class 4 team,” Halford said. “We’ll get back in there late this week and get ready for Farmington. They have two six-seven kids so their length will be disruptive for us. They also return a guard from their quarterfinal run last season. He’s a very solid perimeter player. They are going to me a very solid opponent and we have to travel all the way to their place. But it’s a new opportunity for our kids and a new team on our schedule so we need to go up there ready to go.” 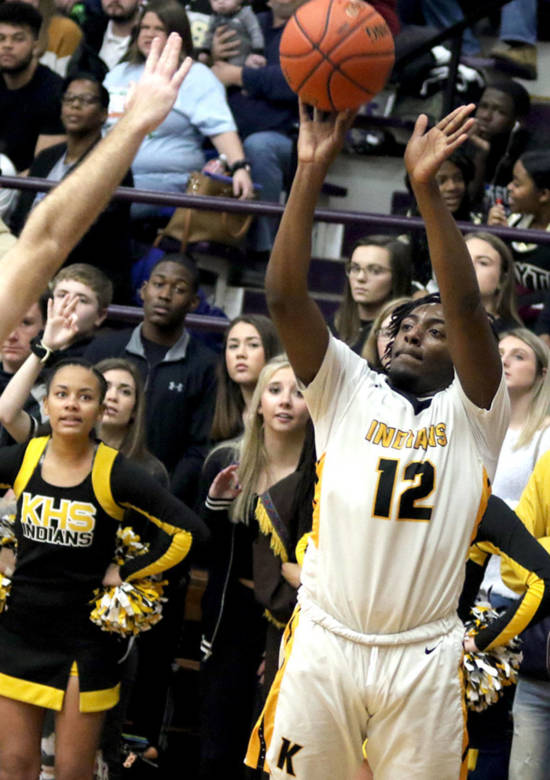 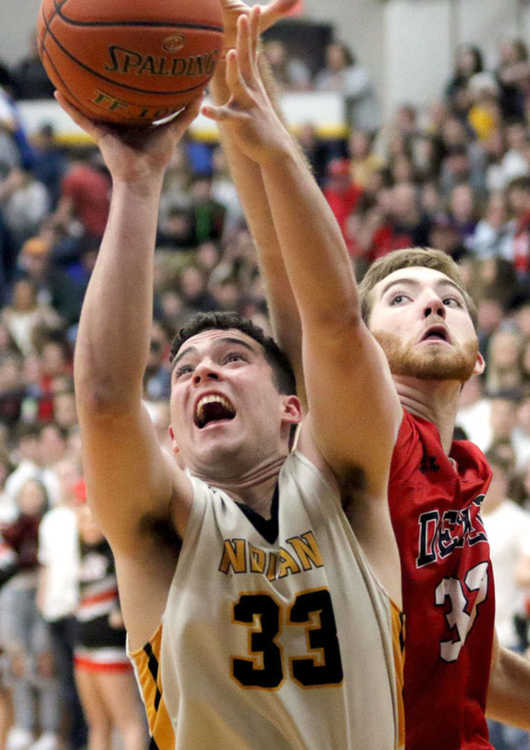 Photo by David Jenkins, staff
Dexter's Garrett Henson attempts to block the shot of Kennett's Jackson Henfling in the championship game of the Bloomfield Christmas Tournament Monday, Dec. 30, 2019, at Bloomfield High School.
Order this photo
Respond to this story