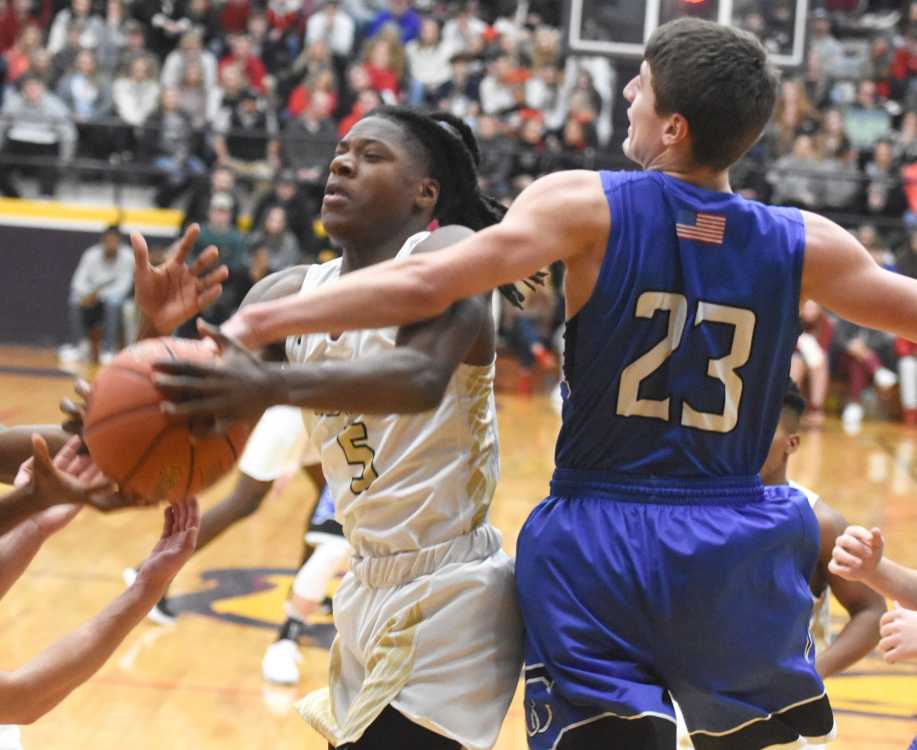 Hayti's Trayvan Thomas (5) and Bernie's Tyler Suiter (23) battle for a rebound during the first quarter of the 63rd Annual Bloomfield Invitational on Monday, Dec. 30, 2019, in Bloomfield, Mo.
DEXTER STATESMAN/Kyle Smith
Order this photo

BLOOMFIELD - Bernie controlled the third-place game of the 63rd Annual Bloomfield Invitational by not allowing more than two unanswered baskets until the game was well in hand.

The second-seeded Mules steadily pulled away from fourth-seeded Hayti to win 74-55 on Monday in Bloomfield.

"More than anything, I feel great about the experience. We are playing a lot of kids who have no experience playing in games like this," Bernie coach Jason Long said. "I felt like we worked hard all year. It felt like we were a little sloppy in some areas in the first half, but that had a lot to do with them pressuring us and getting in our face. It was a good experience and that's what we need to see. The second half we played pretty well."

The defending champion Indians scored two quick buckets in the final seconds of the first quarter, and wouldn't create another run of any size until midway through the fourth quarter when they were trailing by 25 points.

It was then, with less than 5 minutes left, that Hayti scored eight straight, but the Indians wouldn't get any closer than 16 points in the closing minutes.

"They made a bunch of shots there late. We have to keep playing, keep guarding. They have a good team. We are not 20 points better than them," Long said.

Landon Zoll and Blake Harty each had 19 points to lead the Mules, who suffered their first loss of the season in the semifinals to third-seeded Dexter.

Hayti's Trayvan Thomas finished with 28 points and TreCharles McCoy had 15. They scored all of Hayti's 21 points in the first half.

"We're 7-4 and if you'd told me we'd be 7-4 at the beginning of the season with a lot of these guys with no varsity experience, I would have laughed at you," Hayti coach Travis Day said. "I'm excited with where we are right now. Bernie is a good team and it shows us what we have to work on."

Bernie, which last won the tournament in 2014, controlled the first quarter from start to - almost - finish.

The Mules didn't allow a point for the first 6 minutes of the game and took an eight-point lead.

"We were in a big hole. I think we missed four of our first five shots on layups and wide open shots," Day said. "Mentally, especially with kids, when we don't see the ball go in the hole it gets you mentally. That hurts you in spots where we weren't hitting shot, they weren't falling for us, even when we were getting good looks sometimes."

After Hayti got on the scoreboard thanks to a jumper from McCoy, Bernie's Johnny Vaughn, who finished with 10 points, and Zoll made back-to-back 3s to go ahead by 12 points with less than a minute left in the opening quarter.

As of the final 10 seconds, the Indians had still gotten the ball in the basket just once, but Thomas scored, stole the inbound pass and laid in another bucket just before the buzzer to cut Bernie's lead to 14-6.

"We have to get comfortable with somebody being in our face. In the past, it has been an area we have struggled in. In that respect, it is nice to play against a team that is going to get in your face, be aggressive and play hard. You have to be able to handle that," Long said.

Bernie's lead hovered between five and nine points throughout the second quarter as neither team could develop much momentum.

The Mules were able to close the half with back-to-back buckets and John Nimmo banked in a shot under the basket just before the buzzer to put Bernie ahead by 11, the first time they'd been up by double figures since last in the first quarter.

"We never were able to get on a run where we made a couple baskets and got a couple stops," Day said. "We would make a couple baskets and then have a mishap on defense, give up an offensive rebound, things like that. They're a good team that when you make a mistake they are going to make you pay for it."