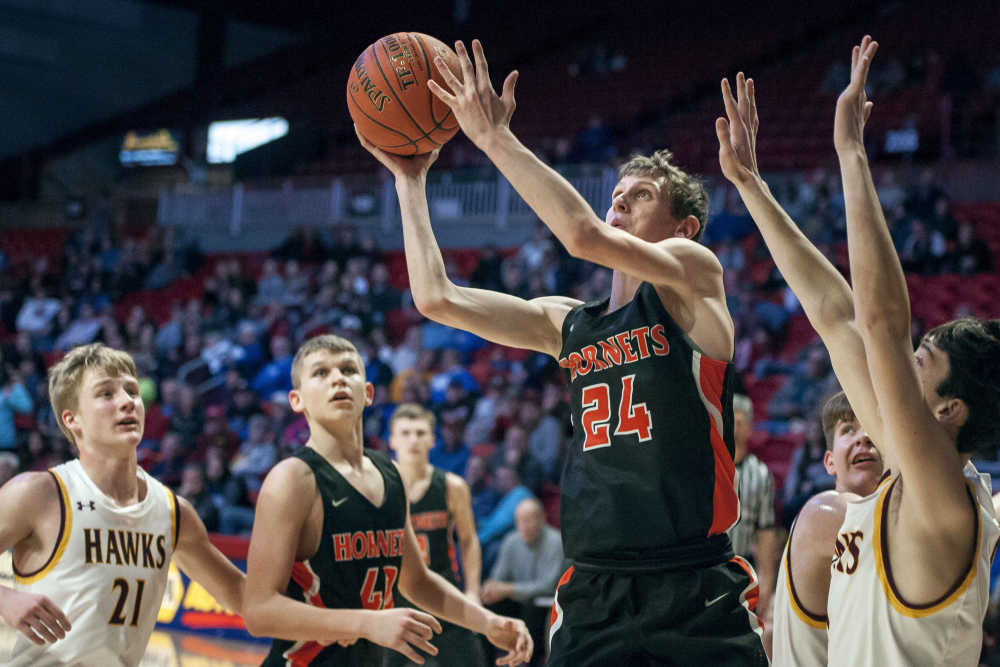 Advance took a nine-point lead into the final quarter of its consolation bracket championship game with Kelly Monday in the 75th annual Southeast Missourian Christmas Tournament at the Show Me Center. However, it almost wasn’t enough, as the Hornets had to overcome some late turnovers and missed shots to hold on and beat the Hawks 60-55.

“We have been working so hard defensively,” Advance coach Dennis “Bubba” Wheetley said. “Working on taking care of the ball, which we did better tonight, but we still had too many turnovers.”

The Hornets (8-2) took ninth-place in the 16-team event, but Kelly sophomore Gavin Jansen did what he could to prevent that in the second half.

While the Kelly offense was improving with each passing minute, the Advance offense struggled – at times.

“We took some shots that I thought we didn’t need to take at certain times,” Wheetley said.

Hornet senior guard Jack Below had a pair of late-game turnovers, but he more than made up for it at the offensive end. He finished with a game-best 33 points, 20 of which came in the second half.

“He has a knack for (scoring),” Wheetley said of Below. “The thing about him is he is always looking to shoot. But he just sees the floor so well.”

Below hit five free throws in the final period to help seal the win, while Hornet forward Jaren Schrader earned Wheetley’s praise, despite scoring just a couple of points.

The sophomore took four charges in the game, which Wheetley felt was a critical component to the victory.

“That young kid stepped up and realized he had to take some charges at times and he has,” Wheetley said. “Those helped win that game tonight.”

Landon Dailey added 12 points in the win, while Drew Dirnberger added 12 for Kelly.

The victory redeemed an earlier 87-84 overtime loss by Advance to the Hawks. 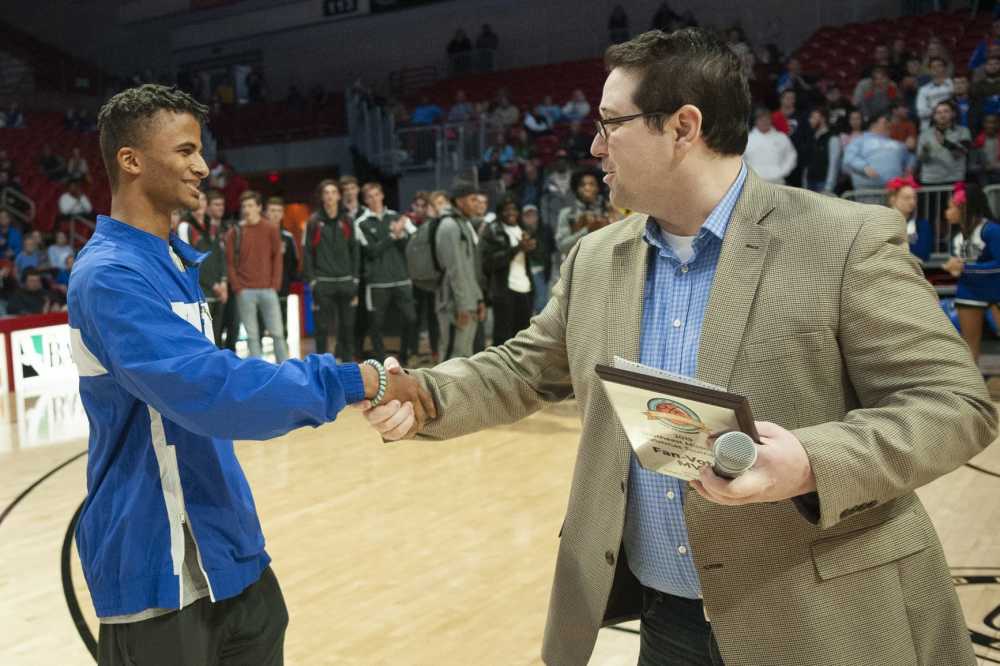 Oran's Goodale voted tournament MVP by fans
By TOM DAVIS ~ Southeast Missourian
Oran senior forward Tyson Goodale had four strong performances in the Southeast Missourian Christmas Tournament, but he saved his most productive outing for his last. He scored 39 points in helping the Eagles beat Delta 80-70 for fifth place Monday at the Show Me Center...

If any money had been placed on the Oran vs. Delta fifth-place game Monday the bettors would have endured heart palpitations throughout the contest.

Depending on the moment, this game appeared to be on its way to a convincing victory for both teams.

“We talked about that,” Eagle coach Joe Shoemaker said. “Because they do go on runs.”

Despite the swings in momentum throughout the game, Oran (9-1) finished strong and ultimately won 80-70.

The Bobcats (9-3) pressured the Eagles defensively from the opening tip with their frenetic style and shot with abandon at the offensive end.

“It never stops,” Shoemaker said of the Delta attack. “They are very relentless. They play a lot of guys and their guys play extremely hard.”

Delta took an early lead, but the Oran press-break began to work and senior forward Tyson Goodale took advantage of the strategy by scoring on lay-ins on the back end of that press. He had 21 points at the end of the first quarter and finished with 39.

“He has really stepped his game up this year with his ball-handling and his shooting,” Shoemaker said of Goodale. “And he has gotten tougher inside.”

The Eagles fell behind midway through the third quarter but had fought back to tie the game entering the fourth.

Oran continually drew fouls around the basket and ended up shooting 29 free throws to Delta’s 13.

Eagle junior Langdon Scheeter finished with 21 points, while Ty Johnson chipped in 10 in the win.

The two teams will meet again Friday at Delta at 7:30 p.m.

To hear Cape Girardeau Central coach Drew Church tell it, he was very interested to see how his Tigers would play in Monday's third-place game.

The truth is - they played very well, scoring a going-away win over county rival Jackson, 58-39.

"We came out flat against Notre Dame," said Church, "and of course, the (Bulldogs) played well, but I wanted to see how my team would respond today."

Jackson got off to a 5-0 lead to begin the contest and led 14-13 at the end of eight minutes but it was all Tiger basketball thereafter.

Central built a 33-23 lead at intermission and expanded that lead nearly double by game's end.

Doreante' Tucker led the Tigers with 19, including two 3s, but the real story is Tyrus Reddin.

The shortest player on the court by five inches, the 5-foot-4 Reddin was all over the court, leading fastbreaks, contesting under the basket and driving furiously into the post.

"You know, Tyrus didn't shoot it all that well tonight," said Church, "but he's our general."

"He's done the things we need him to do all four years - and made his mark tonight."

Reddin, a senior, had 15 points for the winners, the only other Tiger in double figures for Church's 10-1 squad.

For the losing Indians, no player was in double figures.

Rhet Liley came off the bench to add seven for the Tribe (8-4).

Starter Luke Reynolds did not play for Jackson. He was listed as out due to a violation of team rules. No further elaboration was provided postgame.