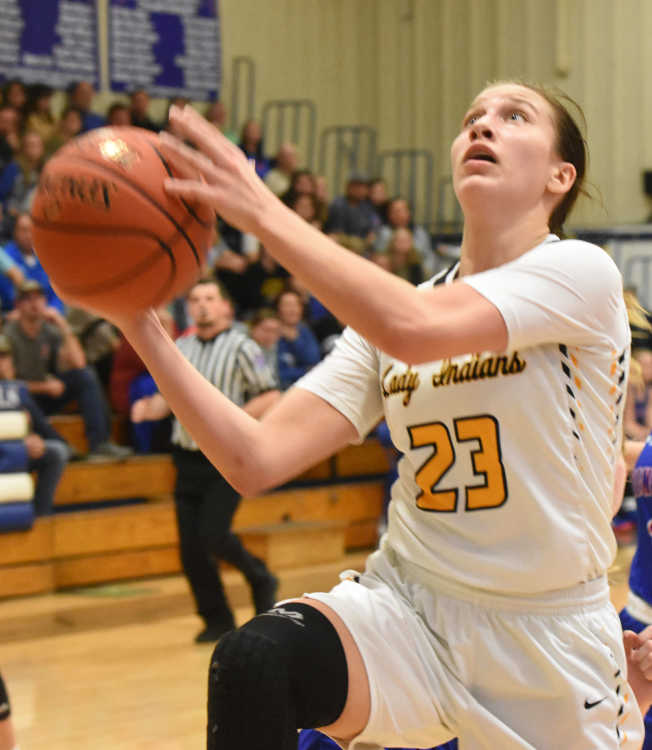 Photo by Scott Borkgren, staff
Kennett’s Caroline Patton (23) finishes a layup against Twin Rivers during the fifth-place game of the Lady Royals Classic on Saturday in Broseley. Patton was selected to the all-tournament team.
Order this photo

BROSELEY, Mo. - 39-35 proved to be the magic score for the Kennett Indians girls basketball team at the Lady Royals Classic.

No. 5 seeded Kennett earned the fifth-place trophy on Saturday by beating No. 6 seeded Twin Rivers 39-35. It was the same score that Kennett beat No. 8 seeded Charleston by in its fifth-place semifinal the day before.

Kennett’s Kyra Jaco and Caroline Patton combined to hit 4 of 6 free throws in the final 2:13 to hold off the host Twin Rivers Royals.

Twin Rivers fell behind 10-0 after one quarter and trailed 21-9 at the half before pulling back within two points late in the fourth quarter. Trailing by three with 22 seconds left, the Royals missed from three-point distance with six seconds on the clock and Patton added a final free throw for Kennett.

On Friday, Kennett also beat Charleston 39-35. Kennett scored its final five points from the free-throw line in the final two minutes after Charleston’s Ashanta Jones put her team ahead 35-34 with a three-pointer.

The game was tied 10-10 after one quarter and 21-21 at the half. Neither team led by more than three points in the second half.

No. 1 seeded Neelyville beat No. 2 seeded Doniphan 54-45 in the championship Saturday. No. 4 seeded New Madrid County Central beat No. 3 seeded Naylor 49-29 in the third-place game. No. 13 seeded Kelly beat No. 10 seeded East Carter County 52-48 in the consolation final.

Kennett (6-5) returns to action Jan. 6 when it hosts Jackson.