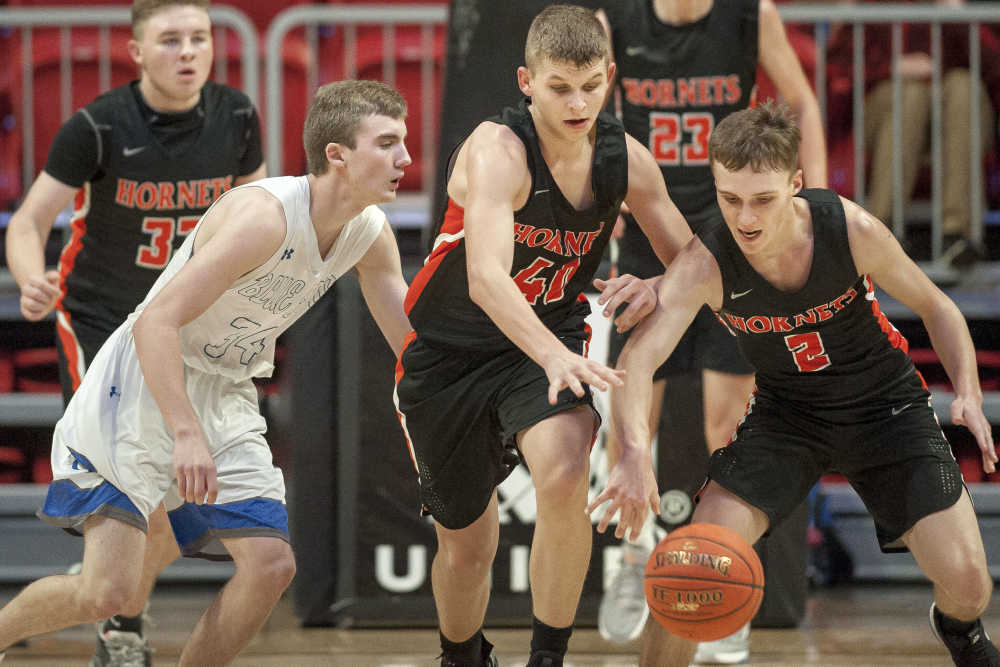 Advance players Jaren Schrader (40) and Joe Eaton (2) goes for a loose ball near other players during the Southeast Missourian Christmas Tournament Thursday at the Show Me Center in Cape Girardeau.
Tyler Graef ~ Southeast Missourian
Order this photo

Advance boy’s basketball coach Dennis “Bubba” Wheetley has appeared to be a bit of a perfectionist when it comes to the postgame assessment of his team.

Despite having won each of its last two games in the Southeast Missourian Christmas Tournament, Wheetley has seen room for growth following both wins.

“Defensively,” Wheetley said following his team’s 75-64 win over Leopold Saturday, “we’ll have two kids doing their job and one kid not doing his job. It takes five and we’re trying to get that through to these kids.”

The No. 10-seed Hornets (7-2) will face No. 9-seed Kelly (8-4) in the consolation bracket championship game Monday at 3 p.m. and the two teams are very familiar with each other.

The Hawks beat Advance 87-84 in overtime earlier this month.

“It’s hard to get these kids to be consistent,” Wheetley said. “But that is what we are working on right now.”

To the Hornet player’s credit, Wheetley has also seen positives in his team’s growth throughout this season and he was quick to note that.

“We’ve got some kids who want (to get better),” Wheetley said. “But they are learning. We’ve just got to keep getting better.” 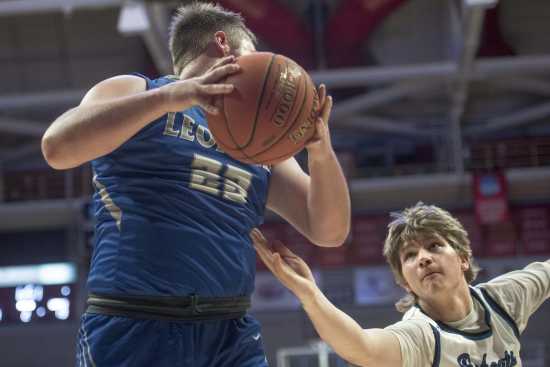 The Bobcats want to pressure an opponent into looking discombobulated offensively, while the Eagles want to do the same to an opposing defense with execution and patience.

“We’re going to try and trap all over the floor and create some havoc,” first-year Bobcat coach Chris Hahn said. “You might give up some shots, but it is about forcing tempo with the way we play.” 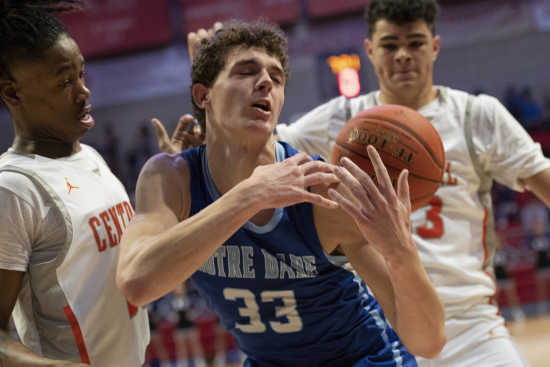 Notre Dame junior Caleb LeGrand (33) attempts to get the ball near Cape Central junior Rodlandis Robinson (20), left, and freshman Cameron Williams (33) during the Bulldogs' 70-54 win over the Tigers in the semifinals of the Southeast Missourian Christmas Tournament on Saturday at the Show Me Center in Cape Girardeau.
Jacob Wiegand ~ Southeast Missourian

The 6-foot-3 athlete tallied just five points, but given his limited amount of experience, any production from him is a positive.

A year ago, Robinson was a 5-foot-9 guard and now he is listed at 6-foot-3, but he might even be taller than that because of how quickly he is developing.

“You can tell,” Church said of the tremendous growth spurt, “he’s still kind of (uncoordinated). But he could be really good for us. 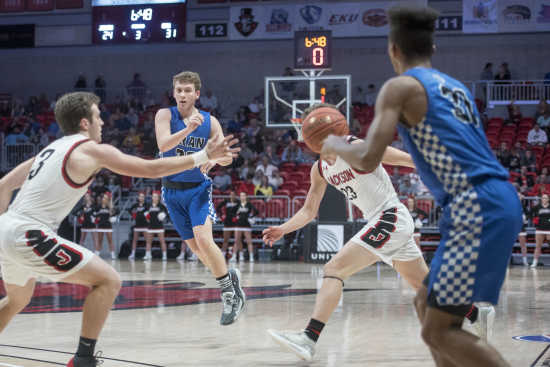 Oran (8-1) I sin the midst of yet another successful season, which shouldn’t surprise anyone.

The Eagles haven’t had a losing record since 2009 and that track record isn’t just happenstance.

Shoemaker has been the leader of the program throughout the incredible stretch, which includes six district titles and three trips to the Class 2 Final Four, including a state championship (2017). However, despite his success, he allows his younger coaches the freedom to teach.

“I just ask our coaches to teach the fundamentals,” Shoemaker said. “I’m not going to tell them how to coach. They can run what defense and offense that they want.

“But they know what we do and they kind of stick to that.”