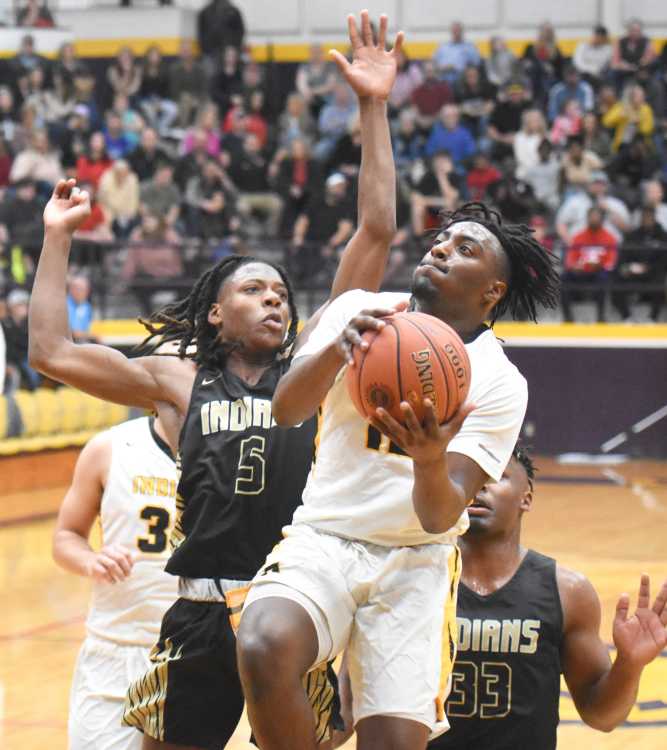 Photo by Kyle Smith, staff
Kennett's Marsayv'aun Harrell (right) drives to the basket against Hayti's Treyvon Thomas during the third quarter of the championship semifinal.
Order this photo

BLOOMFIELD, Mo. - The top-seeded Kennett Indians struggled to knock down perimeter shots most of the way but still found a way dethrone the No. 5 seeded Hayti Indians in a championship semifinal at the Bloomfield Christmas Tournament Saturday night.

Kennett, which knocked down only three of its 24 three-point attempts, built a 12-4 lead by the end of the first quarter and played defending champion Hayti even the rest of the way as it secured a 54-46 win in the first semifinal at Bloomfield High School.

“Hayti took us out of a lot of things we were trying to do offensively,” Kennett coach Andrew Halford said. “They made it difficult for us to run any of our action in the half court because of their pressure and activity. Credit them for that. But we were fortunate to get a few shots around the basket to fall and get out of here with a win.”

Sophomore Ben McMullan, who finished with a team-high 15 points, helped Kennett jumped out to an early eight-point lead by knocking down a pair of 2-pointers and a 3-pointer in the first quarter.

Hayti recovered quickly, scoring the first dozen points of the second quarter to move ahead 16-12 with 3:47 left in the first half.

“We did what we worked on in that stretch,” Hayti coach Travis Day. “When we didn’t turn it over good things happened for us. In the second quarter, we pushed the ball, attacked the basket, and didn't turn it over.”

Kennett followed Hayti's 12-0 run with its own 9-0 run to move back ahead 21-16 with 2:30 left in the second quarter. Carter Maddox, who finished with 12 points, scored three 2-point baskets near the basket during the stretch.

“We forced a few turnovers and got out in transition and got some easy buckets,” Halford said. “We didn’t force very many, but we did have some timely ones that helped us get a lead.”

Kennett continued to lead by five at 25-20 entering halftime and increased its lead to 31-24 early in the second half before Hayti rallied again with seven straight points to tie things up at 31-all with 3:58 left in the third quarter.

Kennett once again relied on its pressure defense to retake control. The Indians closed out the fourth quarter on a 14-4 run to build a 45-37 lead by the start of the fourth quarter. The stretch was highlighted by multiple transition buckets by Jackson Henfling, who recorded eight of his 11 points in the final four minutes of the third quarter.

“Our effort was there in the third quarter,” Day said. “We tied it up but then we just had way too many unforced turnovers. The mistakes you can’t make against a good team we made tonight and they made us pay for it.”

Kennett enjoyed a lead as large as 10 twice in the fourth quarter before Hayti got as close as 50-46 when McCoy hit a 2-pointer with 2:47 remaining. Hayti never scored again after McCoy's bucket, however, allowing Kennett to pad its lead back to eight points before the final buzzer sounded.

Hayti will play Bernie in the third-place game Monday at 7 p.m.

“Anytime you are in a tournament you want to win more than you lose and take home some hardware,” Day said. “So we’ll try it again Monday night and see how things work out.”

Kennett takes on Dexter in the championship Monday at 8:30 p.m.

No. 3 seeded Dexter beat No. 2 seeded Bernie 58-56 in the nightcap semifinal Saturday night.

“It’s been awhile since we’ve got to the championship game,” Halford said. “But we are excited for the opportunity. This next game is where we wanted to be in this tournament. We had an ugly semifinal game to get to the finals but we will go practice Sunday and get ready for it. We are going to have to play very well on Monday to come up here and win this thing.”