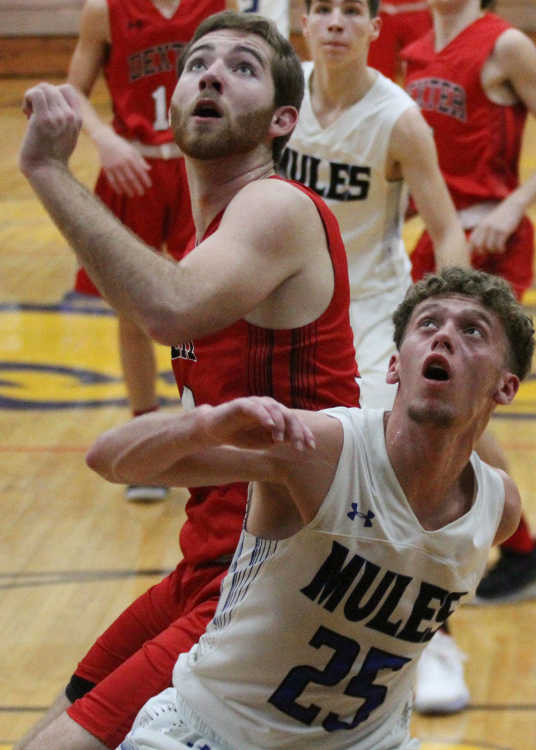 Dexter's Garrett Henson and Bernie's Skyler Schwent battle for a rebound in a championship semifinal of the Bloomfield Christmas Tournament on Saturday.
DELTA DUNKLIN DEMOCRAT/Dustin Ward

The Bearcats overcame a six-point, fourth-quarter deficit to upset second-seeded Bernie 58-56 in the semifinals of the 63rd Bloomfield Christmas Tournament on Saturday night at Bloomfield High School.

“The boys definitely wanted this game bad,” Dexter coach Chad Allen said. “Down the stretch we did a lot of great things.”

Garrett Henson scored inside on a feed from Carter Dorton, who scored 10 points. Peyton Driskill swiped the inbounds pass and scored to tie the game at 56.

“That was huge,” Allen said. “Peyton is a gamer. He’s a competitor and came up big for us down the stretch and got the steal and the putback.”

Ryder Boles made two free throws with 15.1 seconds left for a 58-56 lead, and the Mules couldn’t get a shot off before the final buzzer sounded despite taking a timeout near the 5-second mark.

“It got real physical,” Allen said. “Those games are going to be that way, especially at the end. I’m just glad we handled that physicality and got to the free-throw line and made some free throws. Look at Ryder Boles stepping up right there when the game’s on the line and made two in a row for us.”

“We didn’t lose. Dexter beat us,” Long said. “Our kids have never been in a situation like this before. We didn’t lose. We learned a lot. Dexter’s kids played their butts off and earned the victory. But it was great for our kids to go through that situation. I’m very proud of them.”

“They definitely deserved to win tonight,” Allen said of the Mules. “They played their hearts out. I’m just glad our guys kept battling and found a way to win there at the end.”

Dexter (5-4) will face top-seeded Kennett in the championship game at 8:30 p.m. Monday. Kennett beat fifth-seeded and defending tournament champion Hayti 54-46 in the other semifinal.

The Mules, who lost for the first time this season, opened the fourth quarter with a 9-0 run, holding Dexter scoreless for more than 3 minutes.

Blake Harty, who paced Bernie with 19 points including six 3-pointers, made a 3 to tie the score at 41. Tyler Suiter, who contributed 11 points, recorded two points after the Bearcats were called for goal-tending. John Nimmo scored inside, and after he drew a charge, Suiter scored on a putback for a 47-41 lead.

“There was a sequence there toward the end where they got three offensive boards and three stickbacks,” Allen said. “Those 50-50 balls, we’ve got to get. To me Bernie outplayed us big time when it came time for 50-50 balls.”

Dexter cut the Mules’ lead to four on a putback by Henson and one on a 3-pointer by Boles. The Bearcats tied the score at 50 on two free throws by Andrew Ellinghouse with 2:26 to go.

Zoll, who finished with 12 points, followed with a 3-pointer for a three-point lead

The lead changed hands seven times in a back-and-forth first half.

Dorton drove the baseline for a 2-0 Dexter lead, but Harty answered with a 3-pointer to give the Mules a 3-2 advantage, a lead they held into the second quarter. Suiter scored on a 3-point play and Zoll sank a 3 to extend the Mules’ lead to 9-2.

The Bearcats closed the quarter with a 7-0 run that included a 3-pointer by Ellinghouse and driving layups by Dorton and Boles. They went 0 for 4 from the free-throw line during that stretch.

The score was tied twice in the second quarter before the Bearcats took a 15-13 lead. Dorton made two free throws and Cole Nichols finished on an assist by Driskill, who recorded a steal to set up the play.

Bernie’s Harty and Dexter’s Driskill exchanged 3-pointers before Harty sank a 3, drew a foul and converted a four-point play for a 23-20 lead. Nichols scored on a full-court pass after a Bernie turnover to give the Bearcats a brief 20-19 advantage.

Zoll scored on a drive inside for a five-point Bernie lead, but the Bearcats cut their deficit to one (25-24) on a putback by Henson. Andrew Geohagan scored from the baseline to set the halftime score at 27-24.

Henson’s big third quarter propelled the Bearcats into the lead in the third quarter. He scored 12 of his team’s 17 third-quarter points and helped his team rally from seven points down.

The 6-foot-6 Geohagan owned the matchup of the big men with the 6-6 Henson early in the third quarter, scoring five straight points to give the Mules a 32-25 lead.

Henson scored seven straight points for the Bearcats. He sank a free throw with 3:34 left in the third to tie the score at 34 and Dylan Sitze sank a 3-pointer to give the Bearcats a 37-34 advantage, their first lead since 20-19 in the second.

After Harty made a 3-pointer and Johnny Vaughn sank a free throw to restore the Mules’ lead, Henson scored consecutive baskets on assists from Ellinghouse to give the Bearcats a 41-38 lead entering the final quarter.

“Garrett battled all game,” Allen said “Andrew (Geohagan) and him played a ton of minutes tonight. But I thought both of them did a tremendous job. We had to feed our big fellow. We had to get it to Garrett. I thought Garrett, for the most part, did a really good job for us.”